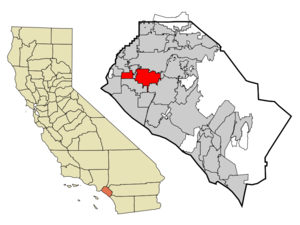 Garden Grove is a city located in northern Orange County, , . In 2004, the city's population was 170,000. State Route 22, also known as the , passes through the city running east-west. Garden Grove is home to a substantial population, forming the northern edge of Orange County's , and also to a large population centered along Garden Grove Boulevard west of Brookhurst Street. The city is known outside the Southern California area for being the home of 's , from which religious broadcasts are made.

The city has a distinct community within it, West Garden Grove, which is located in the westernmost portion of the city.

Garden Grove was founded by in 1874. A school district and church were organized that year. It remained a small rural crossroads until the arrival of the railroad in 1905. The rail connection helped the town prosper with crops of oranges, walnuts, chili peppers and -- later -- strawberries. In 1933, much of the town's central business district was destroyed by the Long Beach earthquake, and one person was killed. The post- boom led to rapid development, and Garden Grove was incorporated as a city in 1956 with about 44,000 residents.

By 1960, population had grown to 85,000; by 1970 it was 120,000. In the late Seventies and Eighties a significant Asian population (primarily Vietnamese and Korean) began to locate in the area. In recent years, Harbor Boulevard has become a booming entertainment and tourism area, served by nine high-rise hotels. Well-known Garden Grove residents include actor , adventurer and baseball stars and . Garden Grove also lends its name to a song by the famous Southern California band Sublime, on their eponymous album.

The annual Strawberry Festival, over Memorial Day weekend, is one of the largest community festivals in the western United States, attracting an estimated 250,000 visitors. It celebrates the city's agricultural past, which include crops such as chili peppers, eggs, oranges, walnuts and strawberries. One strawberry field remains within city limits, at Euclid Street and Hazard Avenue.

There were 45,791 households out of which 42.6% had children under the age of 18 living with them, 59.7% were married couples living together, 13.0% had a female householder with no husband present, and 20.4% were non-families. 15.2% of all households were made up of individuals and 6.0% had someone living alone who was 65 years of age or older. The average household size was 3.56 and the average family size was 3.90.

Of the 65,208 registered voters in Garden Grove; 39.8% are Republicans and 38.7% are Democrats. The remaining 21.5% either declined to state political affiliation or are registered with one of the many smaller political parties.

The city's current mayor is William Dalton, and its city council members are Mayor Pro Tempore Mark Rosen, Dina Nguyen, *Bruce A. Broadwater and Steve Jones. The City Council meets on the second and fourth Tuesdays of each month.

The headquarters of the , a self-styled anti-Communist group, is in Garden Grove.

Fire protection in Garden Grove is provided by the with ambulance transport by . The Garden Grove Police Department provides law enforcement.

In the state legislature Garden Grove is located in the 34th and 35th Senate Districts, represented by Democrat (Santa Ana) and Republican (Huntington Beach) respectively, and in the 67th, 68th, and 69th Assembly District, represented by Republicans and and Democrat respectively. Federally, Garden Grove is located in California's 40th, 46th, and 47th congressional districts, which have Cook PVIs of R +8, R +6, and D +5 respectively [cite web | title = Will Gerrymandered Districts Stem the Wave of Voter Unrest? | publisher = Campaign Legal Center Blog | url=http://www.clcblog.org/blog_item-85.html | accessdate = 2008-02-10] and are represented by Republicans and , and Democrat respectively.