Auburn is the county seat of Placer County, California.[3] Its population at the 2010 census was 13,330. Auburn is known for its California Gold Rush history.

Auburn is part of the Greater Sacramento area. 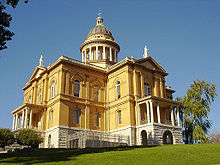 The Placer County Courthouse was constructed between 1894 and 1898.

In the spring of 1849, a group of French gold miners arrived and camped in what would later be known as the Auburn Ravine. This group was on its way to the gold fields in Coloma, California, and it included Francois Gendron, Philibert Courteau, and Claude Chana. The young Chana discovered gold on May 16, 1848. After finding the gold deposits in the soil, the trio decided to stay for more prospecting and mining.

Placer mining in the Auburn area was very good, with the camp first becoming known as the North Fork Dry Diggings. This name was changed to the Woods Dry Diggings, after John S. Wood settled down, built a cabin, and started to mine in the ravine. The area soon developed into a mining camp, and it was officially named Auburn in August 1849. By 1850, the town's population had grown to about 1500 people, and in 1851, Auburn was chosen as the seat of Placer County. Gold mining operations moved up the ravine to the site of present-day Auburn. In 1865, the Central Pacific Railroad, the western leg of the First Transcontinental Railroad, reached Auburn, as it was being built east from Sacramento toward Ogden, Utah.

The restored Old Town has houses and retail buildings from the middle of the 19th century. The oldest fire station and the Post Office date from the Gold Rush years. Casual gold-mining accessories, as well as American Indian and Chinese artifacts, can also be viewed by visitors at the Placer County Museum. 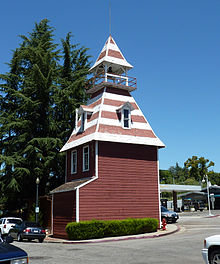 The Queen Anne style Old Town Firehouse is a landmark. It originally adjoined a row of commercial buildings (now demolished). It was home to the Auburn Volunteer Fire Department.[5]

The following films were, at least in part, shot in Auburn:[6] 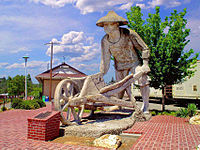 Statue at the Auburn Amtrak station honoring the 10,000+ Chinese workers (known then as "Celestials") who helped build the Central Pacific Railroad.

Auburn is home to Placer High School, which is one of the oldest high schools in California.

Local dentist Kenneth H. Fox's colossal sculptures are perhaps the most famous in town. The statues chronicle Auburn's history with a middle-aged Claud Chana gold panning in the nearby American River, and a Chinese "coolie" worker building the Transcontinental Railroad.

Auburn is situated approximately 800 vertical feet above the confluence of the North Fork and Middle Fork of the American River between Sacramento and Lake Tahoe in central California, along the Interstate 80 freeway. Mountainous wilderness canyons and the western slope of the Sierra Nevada Range lie adjacent eastward, while gentle rolling foothills well-suited for agriculture lie to the west. The crest of the Sierra Nevada lies approximately 45 miles (72 km) eastward, and the Central Valley lies approximately ten miles to the west.

There were 5,302 households out of which 28.4% had children under the age of 18 living with them, 48.5% were married couples living together, 10.0% had a female householder with no husband present, and 38.1% were non-families. 31.7% of all households were made up of individuals and 13.7% had someone living alone who was 65 years of age or older. The average household size was 2.31 and the average family size was 2.91.

Auburn is served by Amtrak passenger rail service a few times a day, and its railroad station is the eastern terminus of AMTRAK's California-based Capitol Corridor train. Interstate Highway 80 is the main east-west highway through this area, connecting Sacramento to the west and the Lake Tahoe/Reno areas to the east. This town can be reached through several interchanges on Interstate 80, three of which (exits 118, 119 A through C, and 120) are somewhat within the town limits. California Highway 49 is the main north-south highway through this area. Highway 49 connects Auburn with the towns of Grass Valley and Nevada City to its north.

The Auburn Municipal Airport is located three miles (5 km) north of town, and it is a General Aviation airport, only. Auburn owns and operates this airport and an industrial site. The airport site covers 285 acres (1.15 km2) including an 80-acre (320,000 m2) industrial site. This airport has a single 3,700 ft (1,128 m)-long runway.[12][13] Services available there include the usual General Aviation ones.[14]