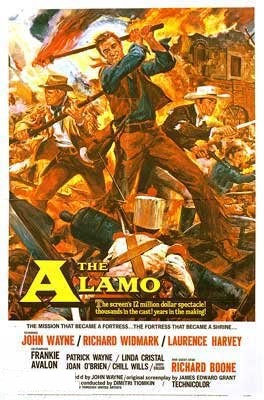 After leaving Republic, Wayne and producer Robert Fellows formed their own production company, .

The movie set, now known as , was constructed near , on the ranch of James T. Shahan. Chatto Rodriquez served as general contractor of the set. To prepare for the filmmaking, Rodriquez built convert|14|mi|km of tarred roads so that there would be easy access to the set from Brackettville. His men also sank six wells, which could provide a total of 12,000 gallons of water each day, and laid miles of new sewage and water lines. They also built convert|5000|acre|ha of horse corrals.

As the initial preparations were completed, Rodriquez worked with art designer Alfred Ybarra to create the set itself. Although the set was not perfect, historians Randy Roberts and James Olson describe it as "the most authentic set in the history of the movies".

Wayne chose to play the role of . For the remaining lead roles, Wayne chose -nominated actors (as ) and (as ).

asked Wayne if he could have the part of the slave as he wanted to break out of song and dance comedy. Some of the producers blocked the move, apparently because Davis was then dating white actress .

Several days after filming began, Widmark complained that he had been miscast and tried to leave the movie. After threats of legal action, Widmark agreed to finish the picture.

Filming began on September 9, 1959. For the most part, the weather cooperated, although many of the native creatures did not. Some actors, notably , were intimidated by the numerous . Crickets were everywhere, often ruining shots by jumping onto actors' shoulders or chirping loudly during dialog.

Various obstacles faced the production, most tragic of which was the murder of bit player LeJean Eldridge in a domestic dispute during the course of filming. Another mishap was when Harvey forgot the fact that a firing cannon has a recoil: during the scene in which, as Travis, he fires such a weapon at a Mexican messenger, the artillery piece came down on his foot, breaking it &mdash; he did however refrain from screaming out in pain until after Wayne had called "Cut!". Wayne described that as being "a professional."

Filming ended on December 15. A total of 560,000 feet of film was produced for 566 scenes. Despite the incredible scope of the filming, it lasted only 3 weeks longer than scheduled. By the end of development, the film had been edited to three hours and thirteen minutes.

Wayne hired to coordinate the media campaign for the movie's release.

The film does very little to explain the causes of the or the reasons why the battle took place.

Wayne's daughter Aissa later wrote, "I think making "The Alamo" became my father's own form of combat. More than an obsession, it was the most intensely personal project in his career."

The film draws many elements from the environment in which it was produced. According to Roberts and Olson, "the script evokes parallels between Santa Anna's Mexico and Khruschchev's Soviet Union, as well as Hitler's Germany. All three demanded lines in the sand and resistance to death."

Though the film had a large box office take, its cost kept it from being considered a success, and Wayne lost his sizable personal investment. He sold his rights in the film to , which had released it, and ultimately it made back its money. "The Alamo" won the and was nominated for Best Actor in a Supporting Role (Chill Wills), Best Cinematography, Color, Best Film Editing, Best Music, Scoring of a Dramatic or Comedy Picture, Best Music, Song ( and for "The Green Leaves of Summer") and Best Picture.

Critical response was mixed, from the New York Herald-Tribune's four-star rated "A magnificent job...Visually and dramatically, "The Alamo" is top-flight," to Time Magazine's "flat as Texas." [quoted in Ashford, Gerald. "On the Aisle", San Antonio Express and News, 5 November 1960, p. 16-A] criticized the script as being "full of historical name-dropping and speechifying," but praised the climactic battle scene.

The film is thought to have been denied more awards than the one it got due to an overblown campaign that alienated Academy voters, including one "Variety" ad that stated, in effect, that the film's cast was praying harder for to win his award than the defenders of the Alamo themselves prayed the night before the battle. The ad, placed by Wills personally, reportedly angered Wayne, who took out an ad of his own deploring Wills's tastelessness.In response to Wills's ad, claiming that all the voters were his "Alamo Cousins," took out a small ad which simply said, "Dear Mr. Wills, I am delighted to be your Alamo cousin, but I voted for ," (Wills's rival nominee for "Exodus"). [Levy, Emanuel. "Oscar Scandals: Chill Wills" http://www.emanuellevy.com/article.php?articleID=822]

The film's cost, more than poor attendance, was at the root of its initial presumed failure, and indeed, it has retained popularity with many people. The soundtrack album has been in print continuously for nearly fifty years. References to "The Alamo" show up with some frequency in various spoofs or homages. Magazine did a spoof of the movie. "The Alamo" is mentioned by () in the "" episode "Badda-Bing, Badda-Bang". The singer describes it as having great battle scenes and nice sets, but with an excessive running time. The movie "" contains an extended bit of dialogue about "The Alamo". The movie "", shot at the actual Alamo in San Antonio, makes numerous comedic references to the Wayne film with the film poster painting featured.

Wayne provided a clip of the film that was used in " How the West Was Won".

Like so many United Artists films of the 1960s, "The Alamo" was severely cut for wide release. The film premiered at its 70mm roadshow length of 202 minutes, including overture, intermission, and exit music. Following its L.A. premiere, UA re-edited the film to 167 minutes for general wide release. The 202 minute version was believed lost until a Canadian fan of the film, Bob Bryden, read about it and realized he had seen the full version in the 1970s. Working with Alamo collector Ashley Ward, he discovered what was believed to be the last surviving print of the 70mm premiere version in Toronto. [citation|last=Bryden|first=Bob|title=The Finding of the 'Lost' Alamo Footage'|url=http://www.bobbryden.com/] . At the time, it was in pristine condition. MGM (UA's sister studio) used this print to make a digital video transfer of the roadshow version for VHS and release.

Following this issue, the print was taken apart and improperly stored in an archive. As a result, what was believed to be the only extant film footage of the missing scenes has now deteriorated. As of 2007, the once presumably lost celluloid footage is again unavailable in any useful form. MGM therefore chose to release the shorter General Release Version for DVD. In the meantime, the only existing version of the original uncut roadshow release is on digital video only. It is the source for recent cable television broadcasts on . The best available actual film elements are of the 35mm negatives of the General Release version.

The musical score includes an and musical included in the film; both are usually omitted from TV broadcasts.