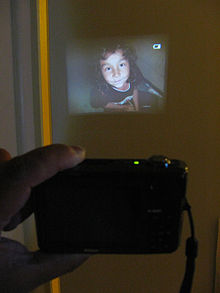 A Handheld projector (also known as a pocket projector or mobile projector or pico projector) is an emerging technology that applies the use of an image projector in a handheld device. It is a response to the emergence of compact portable devices such as mobile phones, personal digital assistants, and digital cameras, which have sufficient storage capacity to handle presentation materials but little space to accommodate an attached display screen. Handheld projectors involve miniaturized hardware and software that can project digital images onto any nearby viewing surface, such as a wall.

The system comprises five main parts: the battery, the electronics, the laser light sources, the combiner optic, and the scanning mirrors. First, the electronics system turns the image into an electronic signal. Next the electronic signals drive laser light sources with different colors and intensities down different paths. In the combiner optic the different light paths are combined into one path demonstrating a palette of colors. Finally, the mirrors copy the image pixel-by-pixel and can then project the image. This entire system is compacted into one very tiny chip. An important design characteristic of a handheld projector is the ability to project a clear image, regardless of the physical characteristics of the viewing surface.

Major advances in imaging technology have allowed the introduction of hand-held (pico) type video projectors. The concept was introduced by Explay in 2003 and shown to various consumer electronics players. Their solution was publicly announced through their relationship with Kopin in January 2005 [1] The first public showcase was by Digislide at the ANZA tech conference in October 2006. Insight Media market research [2] divided the leading players in this application into micro-display makers (e.g., TI's DLP, Himax, Micron / Displaytech and Syndiant LCoS, and Maradin, Microvision and bTendo MEMS scanners), light source makers (e.g., Lumileds, Osram, Cree LEDs and Corning, Nichia, Mitsubishi Lasers) and module makers (e.g., Jabil/Sypro DLP with LED, 3M LCoS with LED, Explay LCoS with Laser). Manufacturers have produced handheld projectors exhibiting high-resolution, good brightness, and low energy consumption in a slightly larger format than pico. However most LED projectors of the current pico size as of May 2009 have been widely criticized for having insufficient brightness for everyday use in a normally lit room.

In 2011, Texas Instruments DLP announced improved chipsets that enable brighter images. The chipsets are designed to enhance image brightness without increasing power usage for both WVGA (native DVD resolution) devices, such as mobile phones, and VGA devices, such as digital cameras and camcorders. The chipsets have the ability to project an image up to 50” on any surface in optimum lighting conditions, the tiny projection chip requires very little space and is virtually undetected in a device’s overall form factor. With advancements in size and performance, the TI DLP Pico chipset supplies big picture experiences with contemporary handsets[citation needed].

The advantages and disadvantages of each technology vary. For example while DLP typically has slightly lower resolution than their LCoS counterparts due to the tiny mirrors used in DLP technology, 3-LED DLP projectors are generally regarded as having a higher contrast, better efficiency and lower power consumption as opposed color-sequential LCoS units and better color quality than white LED LCoS units. Laser scanning projectors such as Microvision's ShowX and AAXA's L1 offer very good color gamut and low power consumption due to the use of lasers as the light source and also present an image that is always in focus. However high speckle noise along with thermal instability primarily due to the pumped green laser in the image remains a major challenge.

Recent mobile phones have the ability to store thousands of photos and can be used to take photos with resolutions up to several megapixels. Viewing the photos is restricted by the phones' small displays. Projector phones allow photographs to be shared with a larger audience.[4] One study found that people preferred to view and share photos with projector phones compared to using conventional mobile phones.[5] The projected display allowed viewing of pictures by all present which is currently not possible using a single mobile device. Furthermore, people enjoyed looking at and talking together about the pictures.

Handheld projectors, in particular projector phones, could offer new possibilities for mobile gaming as demonstrated by the adaptation of the PlayStation 3 game LittleBigPlanet. Players can sketch a world on a sheet of paper or use an existing physical configuration of objects and let the physics engine simulate physical procedures in this world to achieve game goals.[6]

Size reduction of mobile devices is often limited by the size of the used display. Apart from the display a complete phone can be, for example, integrated in a headset. It has been demonstrated that pico projectors integrated in headsets could be used as interaction devices e.g. using additional hand and finger tracking.[7][8] The MIT Media Lab is developing a wearable gestural interface device named SixthSense. Lisa Cowan from UCSD showed a proof of concept of gesture recognition using shadow-occluding of the projector. A modified laser projector has been used to perform gesture recognition and finger tracking using laser-based active tracking techniques at the University of Tokyo (Smart Laser Scanner and Laser Sensing Display).

Combining a pico projector with a webcam, a laser pointer, and image processing software enables full control of any computing system via the laser pointer. Pointer on/off actions, motion patterns (e.g., dwell, repetitive visit, circles, etc.) and more can all be mapped to events which generate standard mouse or keyboard events, or user-programmable actions.[9][10][11]