Dunsmuir is a city in Siskiyou County, California, United States. The population was 1,650 at the 2010 census, down from 1,923 at the 2000 census. It is currently a hub of tourism in Northern California as visitors enjoy fishing, skiing, climbing, or sight-seeing. During steam engine days, it was notable for being the site of an important Central Pacific (and later Southern Pacific) railroad yard, where extra steam locomotives were added to assist trains on the grade to the north.[2]

Located in the Shasta Cascade area of Northern California, Dunsmuir is a popular destination for tourists. Visitors come to trout fish in the Sacramento and McCloud Rivers, or to see and climb Mount Shasta, Castle Crags or the Trinity Alps. Visitors ski (both alpine and cross-country) and bicycle, or can hike to the waterfalls, streams and lakes in the area, including nearby Mossbrae Falls, Lake Siskiyou, Castle Lake and Shasta Lake.

The town is also a destination for historical and cultural tourists, as the town has preserved an authentic 1920s and 1930s look and feel. Dunsmuir's long connection with the railroad draws railfans to enjoy the sights and sounds of the railroad in the steep Sacramento River canyon. Fly fishing is allowed all year round in town (catch and release in Winter) and skiing is close by at Mount Shasta Ski Park.

Dunsmuir has frequent events that draw people from far and wide. In 2010 local concerts featured Charlie Musselwhite, the Palo Alto Chamber Orchestra and Janis Joplin's original band, Big Brother & The Holding company, the later held in the City Ball Park where Babe Ruth and some of the Yankee's played with the local boys. Regular musical entertainment is regularly featured at the new Dunsmuir Brewery Works & Pub and several other local venues, and at local weekend festivals including a celebration of the City's official tree, Dogwood Daze as well as Railroad Days and the Tribute to the Trees concert held al fresco along the river in the City's pristine park, The Dunsmuir Botanical Gardens.

Mount Shasta as viewed from Dunsmuir. 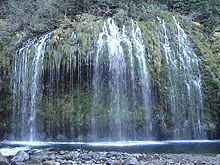 Sites in and near Dunsmuir have been inhabited for over 5000 years. At least three waves of early peoples swept through area, establishing residence. At the time of the first European-American contact in the 1820s, the site of Dunsmuir was within the range of the Okwanuchu tribe of Native Americans.

During the 1820s, early European-American hunters and trappers passed through Dunsmuir's site, following the Siskiyou Trail. In the mid-1830s, pioneer horse and cattle drives came up the Sacramento Canyon, delivering livestock from Mexican California to the new settlements in the Oregon Country to the north. In 1841, an overland party of the famous United States Exploring Expedition passed through the area.

The California Gold Rush led to increased traffic along the Siskiyou Trail through Dunsmuir's site, leading to the first non-Native American settlers at Upper Soda Springs in north Dunsmuir in the early 1850s. The discovery of gold at Yreka, California dramatically increased movement through the site of Dunsmuir, and a toll bridge and stagecoach hotel were built at Upper Soda Springs.

In 1887, the completion of the Central Pacific Railroad along the line of the Siskiyou Trail led to the creation of the modern town of Dunsmuir. The railroad developed a division point on the flats south of Upper Soda Springs, where railroad steam engines would be serviced, and added to trains to push them up the steep grades north of town. A roundhouse and turntable were built. All this activity required the creation of a town, initially known as 'Poverty Flats' or 'Pusher'. South of the present downtown and north of Castella is an area known as Nutglade, which was previously known as Dunsmuir and before that, Cedar Flat. So the name moved north from the South rail yard to the main rail yard. During the railroad heyday, Dunsmuir was the largest town in this County which is the size of Delaware and Rhode Island combined.

In 1888, British Columbian coal baron Alexander Dunsmuir was passing through the little development, and according to contemporary accounts, was so taken with the beauty of the area that he offered to donate a fountain to the new town, if they would name the town in his honor. The offer was accepted, and Dunsmuir's fountain remains operational near the City Park.

By the early 1900s, Dunsmuir was the largest town in Siskiyou County, and for a long time had been the largest California city north of Sacramento. The construction of the Pacific Highway along the Siskiyou Trail in the mid-1910s brought more tourists. By the mid-1950s, the railroad transitioned from steam to diesel locomotives, and the substantial workforce in Dunsmuir was not needed, resulting in the town's contraction. 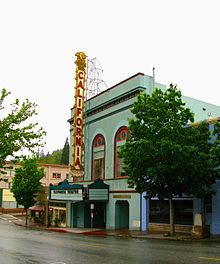 As a result, Dunsmuir retains today much of the charm and scale of the 1920s and 1930s, and has been designated on the National Register of Historic Places. The downtown area is now a designated historic district. The painted signage is remarkable.

In July 1935, two fugitives were passing through town. Police Chief F.R. "Jack" Daw, and California Highway Patrol Officer C. "Doc" Malone went to catch them. The criminals ambushed the officers wounding Officer Malone and killing Chief Daw. One of the criminals, Clyde Johnson, was caught and put in jail in Yreka to await trial. A group of vigilantes from Dunsmuir went to Yreka, broke Johnson out of jail and lynched him. To this day the identity of those vigilantes has never been formally acknowledged. It is said to have been the last public lynching in California.[3]

On the night of July 14, 1991, a derailment on a horseshoe curve known as the "Cantara Loop" on the railroad north of Dunsmuir (then owned by the Southern Pacific Railroad) resulted in the release of approximately 19,000 gallons of metam sodium spilled into the Sacramento River.[4][5][6] The biocide killed every living thing in the river for a distance of some 38 miles (61 km), devastating a popular fly fishing area—one of the most severe toxic spills in U.S. history.

The City is the site of the historic park being developed at Upper Soda Springs on the path of the Siskiyou Trail along the Sacramento River.

At an elevation of approximately 2,350 feet (720 m) above sea level, a unique setting is created by the Sacramento River in which class 3 whitewater rapids are usually created during summer run off through a town of about 2,000 residents. In plain view from some of the city's public streets, this may be one of the few places in western North America where three categories of "twos" (population, elevation, and whitewater difficulty) are met or eclipsed. (Eastern US example-The Cherry River at Richwood, WV)

Mt. Shasta's caverns filter the drinking water and eliminate the need for filtration or treatment thus the town's marketing slogan, "Home Of The Best Water On Earth"℠.[10] Three water fountains are located on Dunsmuir Avenue in the Historic District. Two of them run 24 hours a day.

There were 867 households out of which 23.6% had children under the age of 18 living with them, 43.1% were married couples living together, 10.3% had a female householder with no husband present, and 43.3% were non-families. 35.4% of all households were made up of individuals and 16.4% had someone living alone who was 65 years of age or older. The average household size was 2.22 and the average family size was 2.84.

Dunsmuir has a City Manager form of government with an elected 5 person Council, a Chamber of Commerce and two school districts.

The current Mayor is Nick Mitchell.

Amtrak's Coast Starlight stops daily in both directions at the Dunsmuir Amtrak station, located on one of Dunsmuir's two commercial streets, both in the historic district. The County bus service "The Stage" from Dunsmuir north through the County (Mt. Shasta, Weed, Yreka, etc.) connects to Amtrak. The Amtrak station is well maintained by city residents and local rail enthusiasts, boasting a nice museum and a clean modern station with telephones, bathrooms, and pleasant respite from the weather. The town itself is a railroad museum with an operating turntable. Dunsmuir is the only station stop in Siskiyou County, located at a midpoint between Redding, CA and Klamath Falls, OR, and is the northern most Amtrak station in California.