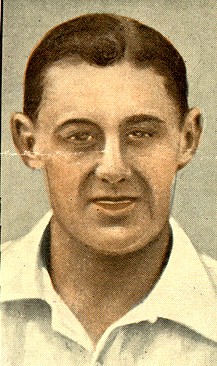 Educated at and , where he was awarded two blues, Allen played all of his cricket as an amateur. Between 1921 and 1950, he played for Middlesex and in 1930 was called to make his Test debut, in the second Test against Australia at . During the famous "" series he strongly disagreed with the controversial tactics of , the English captain, but still took 21 wickets.

He still holds the England Test record partnership for the 8th wicket with of 246 against New Zealand in 1931, and took all ten wickets in an innings for only 40 runs playing for Middlesex against Lancashire in 1929.

After retiring from the county game for Middlesex game in 1950, Allen remained an influential figure in cricket. He played until 1954 and scored an unbeaten first class century (143*) against for the in 1953 [http://www.cricketarchive.com/Archive/Scorecards/20/20573.html] . He chaired the selection panel for the between 1955 and 1961. As a selector has been criticised for having been "...happiest in the company of clipped accents and a background that incorporated all the social graces" [http://sport.guardian.co.uk/cricket/comment/0,,2077311,00.html] . He was ed for services to in 1986. During his retirement he remained a regular fixture at and around the Middlesex team. The MCC rented a house to him -- maintained by the groundstaff -- and a personal gate led from his garden into the ground, and he was granted his own key to the pavilion.