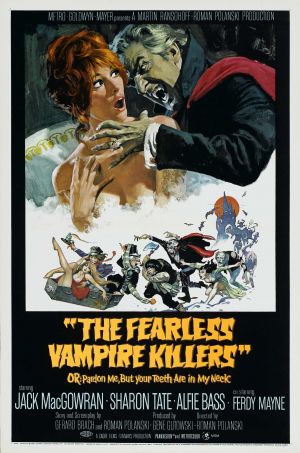 "The Fearless Vampire Killers" (Originally titled "Dance of the Vampires") is a 1967 movie directed by and written by . It has been produced as a musical, named "".

This film takes us into the heart of where Professor Abronsius and his apprentice Alfred are on the hunt for vampires. Abronsius is old and withering and barely able to survive the cold ride through the wintry forests. Alfred is bumbling and introverted. The hunters come to a small Central European town seemingly at the end of a long search for signs of vampires. The two stay at a local inn, full of angst-ridden townspeople who perform strange rituals to fend off an unseen evil.

Whilst staying at the inn, Alfred develops a fondness for Sarah, the daughter of the keeper Yoine Shagal. After witnessing Sarah being kidnapped by the vampire, von Krolock, the two follow his snow trail, leading them to Krolock's ominous in the snow-blanketed hills nearby. They break in to the castle, but are trapped by the Count's lecherous hunchback servant, Koukol. Upon being taken to see the count, he affects an air of aristocratic dignity whilst he cleverly questions Abronsius about his interest in bats and why he has come to the castle. They also encounter the Count's son, the foppish (and homosexual) Herbert. Meanwhile, Shagal himself has been vampirized and sets on his plan to turn Magda, the tavern's beautiful maidservant, into his vampire bride.

Despite misgivings, they accept the Count's invitation to stay in his ramshackle gothic castle, where Alfred spends the night fitfully. The next morning, Abronsius plans to find the castle and kill the Count, seemingly forgetting about the fate of Sarah. The crypt is guarded by the hunchback, so after some wandering they climb in through a roof window. However, Abronsius gets stuck in the window and it is up to Alfred to kill the Count, which he feels unable to do. He has to go back outside to free Abronsius, on the way coming upon Sarah having a bath in her room. She seems oblivious to her danger when he pleads for her to come away with him. After freeing Abronsius, who is half frozen, they re-enter the castle. Alfred again seeks Sarah but meets Herbert instead, who first attempts to seduce him and then, after Alfred realizes that Herbert's reflection does not show in the mirror, reveals his vampire nature and attempts to bite him. The two flee from Herbert through a dark stairway to safety, only to be trapped behind a locked door. They also realise night is falling. As they watch horrified, the gravestones below open up and they see that there are many vampires at the castle. The Count appears, mocking them and tells them their fate is sealed. He leaves them to attend a dance, where Sarah will be presented as the next vampire victim.

However, the hunters escape by boiling water under a cannon and blowing off the door, and come to the dance in disguise, where they grab Sarah and flee. Escaping by horse carriage, they are now unaware that it is too late for Sarah, who bites Alfred, thus allowing vampires to be released into the world.

Coming straight on the heels of Polanski's international success with "", the film was mounted on a lavish scale - color cinematography, huge sets in England, location filming in the , elaborate costumes and choreography suitable for a period epic. Previously accustomed only to extremely low budgets, Polanski chose some of the finest English cinema craft artists to work on the film: cameraman , production designer Wilfrid Shingleton. Polanski engaged noted choreographer Tutte Lemkow, who played the titular musician in "", for the film's climactic minuet.

During filming the director decided to switch formats to while filming on location. Flat scenes already filmed were optically converted to match.

In his autobiography, Roman Polanski discusses some of the difficulties in filming "The Fearless Vampire Killers": "Our first month's outdoor filming became a series of ingenious improvisations, mainly because the last-minute switch from one location (Austria) to another (, an Italian ski resort in the ) had left us so little time to revise our shooting schedules. The fact that we were filming in Italy entailed the employment of a certain number of Italian technicians, and that, in turn, bred some international friction. Gene Gutowski (the film's European producer) rightly suspected that the Italians were robbing us blind."

Despite numerous production headaches, Polanski is said to have enjoyed making the film. His cinematographer, Douglas Slocombe, was quoted by Ivan Butler in his book, "The Cinema of Roman Polanski", as saying, "I think he (Roman) put more of himself into "Dance of the Vampires" than into another film. It brought to light the fairy-tale interest that he has. One was conscious all along when making the picture of a background to the story. Very few of the crew could see anything in it - they thought it old-fashioned nonsense. But I could see this background....I have a French background myself, and could sense the Central European atmosphere that surrounds it. The figure of Alfred is very much like Roman himself - a slight figure, young and a little defenseless - a touch of . It is very much a personal statement of his own humour. He used to chuckle all the way through."

When the film was first released in the United States, MGM wanted to market it as a farce by saddling it with a longer title - "The Fearless Vampire Killers, or Pardon Me, But Your Teeth Are in My Neck". The director was less than pleased. Not only did , the American executive producer, change the original title from the more eloquent "Dance of the Vampires", he also chopped out 16 minutes of footage, redubbed some of the actors' voices, and tacked on a pre-credit slapstick cartoon sequence as well as a scene of the famous transforming into a grinning, fanged vampire.

Though it was critically panned on its initial release, "The Fearless Vampire Killers" has garnered latter-day praise for its vivid atmosphere and audacious balance of broad comedy with -style horror. The eventual murder of Sharon Tate at the hands of the gang has lent an additional notoriety to the production.

This film was the source material for the wildly popular European stage musical "". It is peppered with numerous references to King , who even appears in the ball scene.

Director of Photography would work with actor , who plays one of the villagers, again in the epic blockbuster film "" in 1980.

"The Fearless Vampire Killers" was Polanski's first feature to be photographed in color and using a widescreen 2.35:1 aspect ratio. The film's striking visual style, with its snow-covered, fairy-tale landscapes, recalls the work of Russian fantasy filmmakers and Alexander Row. Similarly, the richly textured, moonlit-winter-blue color schemes of the village and the snowy valleys evoke the magical, kaleidoscopic paintings of the great Russian-Jewish artist , after whom the innkeeper in the film is named.

The film is also notable in that it features Polanski's love of winter sports, particularly . In this respect, "The Fearless Vampire Killers" recalls Polanski's earlier short film, "".

The score was provided by , who also scored "Rosemary's Baby".