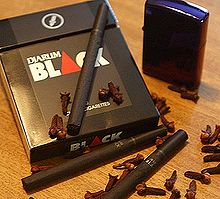 /ˈkrɛtɛk/) are cigarettes made with a blend of tobacco, cloves and other flavors. The word "kretek" itself is an onomatopoetic term for the crackling sound of burning cloves. Haji Jamahri, a resident of Kudus, Java, created kreteks in the early 1880s as a means to deliver the eugenol of cloves to the lungs, as it was thought to help asthma.[citation needed] Jamahri believed the eugenol cured his chest pains and he started to market his invention to the village, but he died before he could mass market it. M. Nitisemito took his place and began to commercialize the new cigarettes. Today, kretek manufacturers directly employ over 180,000 people in Indonesia and an additional 10 million indirectly.[1]

Partly due to favorable taxation compared to "white" cigarettes,[2] kreteks are by far the most widely-smoked form of cigarettes in Indonesia, where about 90% of smokers usually smoke kreteks.[3] In Indonesia, there are hundreds of kretek manufacturers, including small local makers and major brands. Most of the widely-known international brands, including Bentoel, Djarum, Gudang Garam, Jakarta, Sampoerna, and Wismilak, originate from Indonesia. Nat Sherman of the United States produces cigarettes branded as "A Touch of Clove" but they are not true kreteks since they contain clove flavoring in the filter rather than actual clove spice mixed with the tobacco.[4] 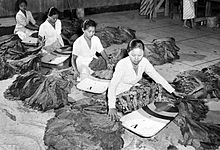 Tobacco leaves sorting in Java. Tobacco was introduced by the Dutch during the colonial period.

The origin of kretek cigarettes can be traced to the late 19th century. The creator of kretek was Haji Jamahri, a native of the town of Kudus in Indonesia's Central Java region. Suffering from chest pains, Jamahri attempted to reduce the pain by rubbing clove oil on his chest. Jamahri sought a means of achieving a deeper relief and smoked his hand-rolled cigarettes after adding dried clove buds and rubber tree sap. According to the story, his asthma and chest pains vanished immediately. Word of Jamahri’s product spread was rapidly among his neighbors, and clove cigarettes soon became available in pharmacies under the name of rokok cengkeh – clove cigarettes. Although first marketed as a medicinal product, kreteks became widely popular outside this capacity.

In those years, the locals used to hand-roll kreteks to sell on order without any specific brand, packing or limits on ingredients used in production. A resident of Kudus named Nitisemito had the idea of starting serial production and selling kreteks under a proprietary brand name. Unlike other manufacturers, Nitisemito who first created the Bal Tiga brand in 1906 enjoyed great success by implementing unprecedented marketing techniques such as using threats, embossed packs or offering free-of-charge promotional materials. Commercial manufacture did not start in earnest until the 1930s.[5]

Furthermore, he also developed a production system which was called the abon system and which offered opportunities for other entrepreneurs without enough capital. In this system, a person called as "abon" assumes the job of delivering finished products to the company which pays the price of piecework done whereas the company is liable to supply the necessary production materials to the "abons". However, most manufacturers have since opted to have their workers working under the roof of their own factories, to maintain quality standards. Nowadays, only a few kretek manufacturers make use of the abon system.

During the period from 1960 until 1970, kreteks became a national symbol against "white cigarettes". In mid 1980’s, the number of machine-produced cigarettes exceeded that of hand-rolled ones. One of the largest income sources of Indonesia, the kretek industry comprises 500 large and small manufacturers employing a total of around 10 million people.[6]

Since 2009, kreteks are not legal for sale in the United States. However a variation of the kretek is being sold: "cigars" that are similar in size and shape to the original kreteks, also with a filter and the original tobacco/clove blend, but in a tobacco-based paper.

The quality and variety of tobacco play an important role in kretek production. One kretek brand can contain more than 30 types of tobacco.[7] Minced dried clove buds weighing about 1/3 of the tobacco blend are added. Sometimes, the last process which machine-made or hand-rolled kreteks go through is the spraying of sweetener at the butt end of the cigarette.

The venous plasma nicotine and carbon monoxide levels from 10 smokers were tested after smoking kreteks and were found to be similar to non-clove brands of cigarettes, such as Marlboro.[8]

The eugenol in clove smoke causes a numbing of the throat which can diminish the gag reflex in users, leading researchers to recommend caution for individuals with respiratory infections.[11] There have also been a few cases of aspiration pneumonia in individuals with normal respiratory tracts possibly because of the diminished gag reflex.

Legal status in the United States

In the United States, cigarettes were the subject of legal restrictions and political debate, including a proposed 2009 US Senate bill that would have prohibited cigarettes from having a "characterising flavor" of certain ingredients other than tobacco and menthol.[12]

A study by the U.S. Centers for Disease Control found kreteks account for a relatively small percentage of underage smoking, and their use was declining among high school students.[13] Critics of the bill argued that support of the bill by the large U.S. tobacco maker Philip Morris, which makes only conventional and menthol cigarettes, indicated that the bill was an attempt to protect the company from competition.[14]

Some U.S. states, including Utah, New Mexico, and Maryland, passed laws that prohibit the sale of kreteks.[15] On 14 March 2005, Philip Morris International announced the purchase of Indonesian tobacco company PT HM Sampoerna after acquiring a 40% stake in Sampoerna from a number of Sampoerna’s principal shareholders.[16]

In 2009, the Family Smoking Prevention and Tobacco Control Act was introduced in the US Congress and signed into law by President Barack Obama, giving the FDA significantly more regulatory power over tobacco; one of the provisions in the law includes a ban on the use of flavors in tobacco, other than menthol. The ban includes kreteks. As of September 22, 2009 the clove cigarette was no longer legal to sell or distribute in the US, and cigarettes purchased overseas are subject to seizure by U.S. Customs.[17] There is an exception to this rule when receiving cigarettes as gifts through the USPS and is only allowed if certain guidelines are followed. This rule does not allow for purchase of tobacco products overseas but allows the receipt of gifts from domestic individuals and international individuals. [18] However, Kretek International Inc., importer of the Djarum brand continued to offer the clove / tobacco products as little cigars, which have lower taxes (in some U.S. states) and looser restrictions than cigarettes.

On April 12, 2010 Indonesia filed a formal complaint with the World Trade Organization stating the ban on kreteks in America amounts to discrimination because menthol cigarettes are exempt from the new regulation. Trade Ministry Director General of International Trade Gusmardi Bustami has stated that the Indonesian government has asked the WTO panel to review US violations on trade regulations, including the General Agreement on Tariff and Trade (GATT) 1994, Technical Barriers to Trade (TBT) and Sanitary and Phytosanitary (SPS) Agreement. The TBT Agreement is of special importance as it defines clove cigarettes and menthol cigarettes as "like products". Claims of discrimination are enhanced when noting that 99% of kreteks were imported from countries other than the United States (chiefly Indonesia), while menthol cigarettes are produced almost entirely by American tobacco manufacturers.[19] Indonesia's case is further strengthened by comparing the number of young kretek smokers in America with the number of young menthol cigarette smokers. According to US health reports, 43% of young smokers smoke menthol cigarettes, which accounts for nearly 25% of the total cigarette consumption in the United States. Young smokers habituated to Kreteks, however, account for less than 1% of cigarette consumption in the US, and <1% of the total cigarettes sold in the US. The WTO investigative panel is expected to rule on Indonesia's claim some time in mid-2011. [20]

Next to the United States of America kretek cigarettes are among others sold in the Netherlands, Germany, France, Australia, Brazil, Vanuatu, etc. In Europe only smaller packs and thinner cigarettes are sold to adhere to the EU established maximum amount of nicotine and tar levels.