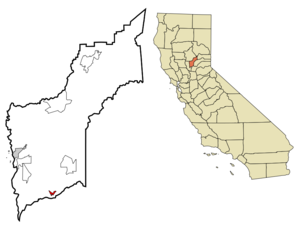 mapsize = 250x200px
map_caption = Location in Yuba County and the state of

Wheatland was the site of the bloody of 1913.

In 1888, Edward P. Duplex was elected Mayor, the first black man to be elected mayor of a Western United States City. His original barbershop stands today on Main street.

There were 785 households out of which 40.0% had children under the age of 18 living with them, 52.4% were married couples living together, 16.8% had a female householder with no husband present, and 25.6% were non-families. 21.5% of all households were made up of individuals and 11.3% had someone living alone who was 65 years of age or older. The average household size was 2.90 and the average family size was 3.37.