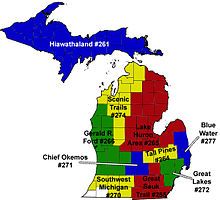 The council is administratively divided into districts:

Camp Munhacke is a 120-acre (0.49 km2) camp located roughly 15 minutes north of Chelsea, Michigan, located on Bruin Lake. Camp Munhacke is the primary camp for the Great Sauk Trail Council, hosting Cub Scout Summer Camp during the summer. The camp features four cabins and 12 campsites. It is also borders the Pinckney Recreation Area and connects to the Pottawatami Trail. The camp host 2k campers in a 6 week season, and approximate 15,000 through the course of the year.

Camp Muscootah is a 40-acre (0.16 km2) camp located five minutes west of Hillsdale, Michigan. The camp offers 13 campsites, an open pavilion, and a large firebowl. Rustic camping: pack it in and pack it out. Go Green!

Camp Teetonkah is a 210-acre (0.85 km2) camp near Grass Lake, Michigan. Opened in 1912, it is the second-oldest Boy Scout camp in America. The camp can be found on Jackson County's Big Wolf Lake and features a new dining hall, three cabins, four Adirondack shelters and seven campsites.

Camp Teetonkah is one of the oldest Boy Scout Camps still operating in the United States. Originally, the camp consisted of about 50 acres (200,000 m2). The facility's 1930 camp brochure says it will be Teetonkah's eighteenth season. It would seem that if one subtracts 18 from 1930 you would come up with 1912 but that is incorrect. If 1930 was the 18th year and you count them backwards, their first year was 1913. Upon digging a little deeper, Teetonkah has operated on the same land since 1913 but the land was owned privately until the Jackson Council took official title in late 1916 or early 1917. Many early camps were not always owned or owned right away. Some councils rented or leased the land or simply had free use of it from the owners until they had the finances to buy it. The Jackson Council held its first summer camp operation there (at Teetonkah) in 1913 and continued to do so for the next eighty-plus years. The facility now operates as a weekend camp as do Camps Belzer and Miakonda. Many local, deceased Scouters have had their ashes scattered at Camp Teetonkah so they're part of the camp for eternity—perhaps the ultimate act of camp and Scouting loyalty. The list of those forever part of the camp includes a former council president as well as a council executive. According to a 1921 news clipping, the name "Tee-Tonk-Ah" means "Big Lodge" It also means "Buffalo". Teetonkah award camp patches from as early as 1921 to its final season of summer camp in 1994. At weak attempt to bring the camp back, in 2010 the camp reopened for three weeks of program. [1]

In 1913, the Jackson Boy Scout Council held its first summer camp at Teetonkah, and continued to hold summer camps for 81 years. Since then, the council stopped holding summer camp at any of its three properties. Scout scuttlebutt is that the council will revive a summer camp program at Teetonkah in the next few years. However, camps in Michigan must meet strict state guidelines.

Today, Teetonkah is available for use by Boy Scout troops and Venturing crews. A few groups use the facility for more than a weekend camp-out. Training events include National Youth Leadership Training, Ann Arbor, Mich.-based Great Sauk Trail Council.

In 2006 and 2007 a dining hall was built that has an industrial kitchen, 14 unisex showers, adult and youth boys bathroom and 250 person dining room, the building also has seating area for additional 250 people underneath a pavilion attached to the dining hall.

In 2008–2011 the camp has gone through lumber selected harvest. This was in accordance of forestry plan put into place. This also allows the creation of seven new camp sites. In 2009 Water was reactivated to two cabin areas and one campsite, as money permits the camp plans to have running water in all camp sites. Prior 2008 the camp was known to have orange water, now the camp has a water softener system able to handle the entire camp.

During the Fourth of July weekend the camp host to firework display to residents of wolf lake. Provided by Wolf Lake Pyro's. Making the two-night show one of the largest in the area.

Manitous Lodge is the Order of the Arrow lodge serving the Great Sauk Trail Council. Manitous is translated as Mystic Lodge in Ojibway, and the lodge totem is the medicine wheel. The four chapters in the lodge, Munhacke, Teetonkah, Tecumseh, and Allohak, correspond in location with their respective districts also names of the original lodges in the early days of the order of the arrow in southeast Michigan. Manitous holds two ordeals, one service weekend, and one winter banquet each year.

Camp Teetonkah is a Boy Scout camp in the Great Sauk Trail Council. Camp Teetonkah is located near Grass Lake, Michigan, and is located on Wolf Lake. Camp Teetonkah was founded in 1912. The council took the title in 1917. Originally Camp Teetonakah was located on a 50-acre (200,000 m2) piece of land,but now is a 210-acre (0.85 km2) camp. Camp Teetonah has had many challenges to face over the years, including temporary closure and an attempt to sell the camp by its council owners. However, fierce resistance and a fund raising campaign by Teetonkah loyalists to prevent its sale, forced the council to abandon the sale plan and eventually to invest in refurbishing existing facilities, construction of new ones, and reinstatement to very active use by the council and its membership. The camp is steeped in its long and substantial history of decades of affiliation with area members of the Boy Scouts of America's honor society, the Order of the Arrow.