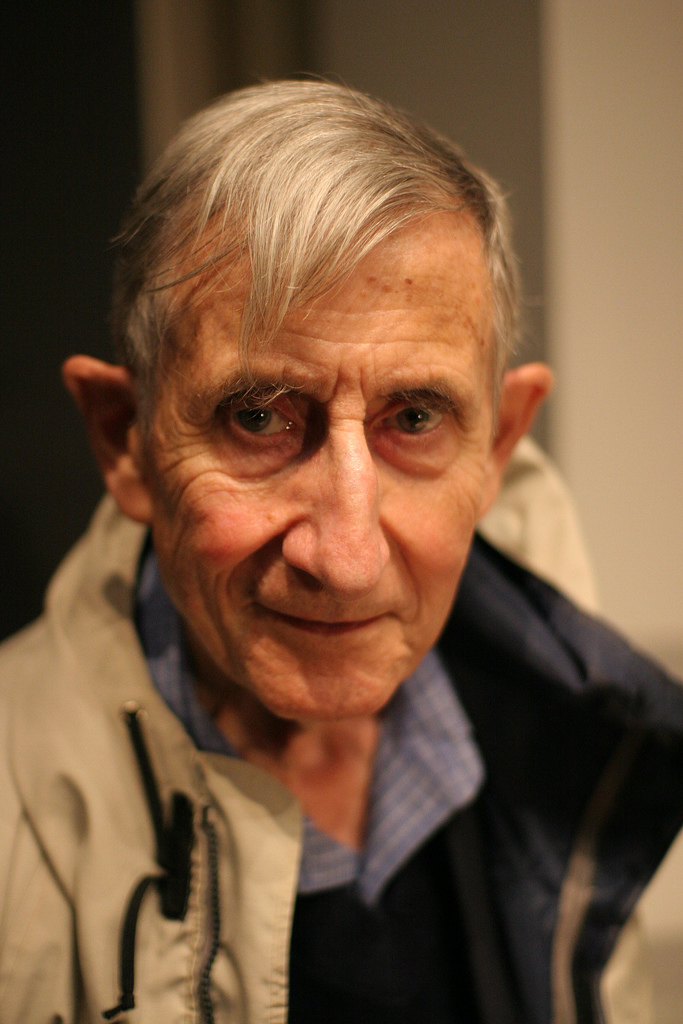 Freeman John Dyson FRS (born , ) is an English-born [ [http://news.bbc.co.uk/1/hi/sci/tech/740688.stm BBC News | SCI/TECH | Scientist wins $1m religion prize ] ] American [Freeman Dyson: Disturbing the universe, pg 131, "I had finally become an American...The decision to abjure my allegiance to Queen Elizabeth might have been a difficult one, but the Queen's ministers made it easy for me."] theoretical and , famous for his work in , , and . He is a lifelong opponent of and a proponent of and . Dyson is a member of the Board of Sponsors of The . [ [http://www.thebulletin.org Bulletin of the Atomic Scientists] ]

Dyson's father was the English composer George Dyson. Despite sharing a last name, he is not related to early 20th century astronomer . However, as a small boy, Freeman Dyson was aware of Frank Watson Dyson; Freeman credits the popularity of someone with the same last name with inadvertently helping to spark his interest in science. Dyson received an honorary Sc.D. from in 1990.

Dyson's mother was trained as a lawyer but worked, after Dyson was born, as a social worker. [ [http://www.wildriverreview.com/quarkpark_dyson.php Wild River Review Interview by Joy E. Stocke] ]

His wife, Imme Dyson, is an accomplished masters runner.

Dyson has six children. One daughter is , the noted digital technology consultant. His son, George Dyson, is a historian of technology, one of whose books is "Project Orion: The Atomic Spaceship 1957-1965".

Dyson also did work in a variety of topics in mathematics, such as topology, analysis, number theory and random matrices.

From 1957 to 1961 he worked on the Orion Project, which proposed the possibility of space-flight using . A prototype was demonstrated using conventional explosives, but a treaty which he was involved in and supported, banned the testing of nuclear weapons other than underground, and this caused the project to be abandoned.

In 1958 he led the design team for the , a small, inherently safe nuclear reactor used throughout the world in hospitals and universities for the production of isotopes.

A seminal work by Dyson came in 1966 when, together with and independently of and , he proved rigorously that the exclusion principle plays the main role in the stability of bulk matter [F. J. Dyson, A. Lenard, "J. Math. Phys." 8, 3, 423-434 (1967); F. J. Dyson, A. Lenard, "J. Math. Phys.", 9, 5, 698-711 (1968); E. H. Lieb, W. Thirring, "Phys. Rev. Lett." 35, 687-689 (1975).] . Hence, it is not the electromagnetic repulsion between electrons and nuclei that is responsible for two wood blocks that are left on top of each other not coalescing into a single piece, but rather it is the exclusion principle applied to electrons and protons that generates the classical macroscopic . In condensed matter physics, Dyson also did studies in the phase transition of the Ising model in 1 dimension and

In 1977, Dyson supervised Princeton undergraduate in a term paper that outlined a credible design for a nuclear weapon. This earned Phillips the nickname "The A-Bomb Kid".

In the 1984&ndash;85 academic year he gave the at Aberdeen, which resulted in the book "".

In 1989, Dyson taught at as a Memorial Lecturer. In the same year, he was elected as an Honorary Fellow of Trinity College, University of Cambridge.

Dyson has published a number of collections of speculations and observations about technology, science, and the future. In 1996 he was awarded the Lewis Thomas Prize for Writing about Science.

, Dyson is the president of the , the space research organisation founded by .

In 2003, Dyson was awarded the Telluride Tech Festival Award of Technology in Telluride, Colorado.

Dyson is a long-time member of the defence advisory group.

Dyson cheerfully admits his record as a prophet is mixed, but "it is better to be wrong than to be vague." [ Dyson, 1999, "The Sun, the Genome, and the Internet"]

In 1960 Dyson wrote a short paper for the journal "Science", entitled "Search for Artificial Stellar Sources of Infrared Radiation". [cite journal| title=Search for Artificial Stellar Sources of Infrared Radiation| doi=10.1126/science.131.3414.1667| journal=Science| volume= 131| pages= 1667–1668| first=Freeman J.| last=Dyson| year=1960 | month=3 June| issue=3414| pmid=17780673] In it, he theorised that a technologically advanced might completely surround its native star in order to maximise the capture of the star's available energy. Eventually, the civilisation would completely enclose the star, intercepting with wavelengths from visible light downwards and radiating waste heat outwards as radiation. Therefore, one method of searching for extraterrestrial civilisations would be to look for large objects radiating in the infrared range of the .

Dyson conceived that such structures would be clouds of -sized s, though writers have preferred a solid structure: either way, such an artifact is often referred to as a , although Dyson himself used the term "shell". Dyson says that he used the word "artificial biosphere" in the article meaning a habitat, not a shape. [20 minutes into [http://video.google.com/videoplay?docid=350379535220823176&q=genome a video] ]

Dyson has also proposed the creation of a "Dyson tree", a genetically-engineered plant capable of growing on a . He suggested that comets could be engineered to contain hollow spaces filled with a breathable atmosphere, thus providing self-sustaining habitats for humanity in the outer .

Freeman Dyson has been interested in space travel since he was a child, reading such classics as 's "". As a young man, he worked for on the nuclear-powered Orion spacecraft. He hoped Project Orion would put men on Mars by 1965, Saturn by 1970. He's been unhappy for a quarter-century on how the government conducts space travel:

He still hopes for cheap space travel, but is resigned to waiting for private entrepreneurs to develop something new—and cheap.

cquote|No law of physics or biology forbids cheap travel and settlement all over the solar system and beyond. But it is impossible to predict how long this will take. Predictions of the dates of future achievements are notoriously fallible. My guess is that the era of cheap unmanned missions will be the next fifty years, and the era of cheap manned missions will start sometime late in the twenty-first century. Any affordable program of manned exploration must be centred in biology, and its time frame tied to the time frame of biotechnology; a hundred years, roughly the time it will take us to learn to grow warm-blooded plants, is probably reasonable.

Dyson also has some credits in . His concept "Dyson's transform" led to one of the most important lemmas of 's theorem that every even integer can be written as a sum of no more than six primes.

Dyson agrees with the general theory of anthropogenic , and has writtenHowever, he has argued that existing simulation models of climate fail to account for some important factors, and hence the results will contain too much error to reliably predict future trends.He has also argued against the ostracisation of scientists who oppose the , stating that heretics have historically been an important force in driving scientific progress.He also believes that directing money towards fighting global poverty and providing medical aid will bring greater benefits to society than attempting to combat climate change.

Dyson was an early proponent of Carbon sequestration by plants by planting gigantic areas of trees as long ago as 1976. [cite web|url=http://www.thecornerhouse.org.uk/item.shtml?x=51971#fn001ref|title=The Dyson Effect: Carbon 'Offset' Forestry and The Privatization of the Atmosphere|author=Larry Lohmann|date=July 1999|publisher=|accessdate=2007-09-05] He revisited this subject in 2007 where he asserted that the "fuss about global warming is grossly exaggerated", having calculated that "the problem of carbon dioxide in the atmosphere is a problem of land management, not a problem of meteorology." The failures of climate scientists to understand this was due to his belief that "No computer model of atmosphere and ocean can hope to predict the way we shall manage our land."

Dyson has questioned the predictive value of current computational models of , urging instead more extensive use of local observations.

Dyson regards the term "global warming" as a misnomer, pointing out that warming will not occur uniformly throughout the world, but will instead be subject to regional variations:

Regarding political efforts to reduce the causes of climate change, Dyson argues that other global problems should take priority.

At the , Dyson and colleagues proposed ripping out two gun turrets from the RAF s, to cut the catastrophic losses to German fighters in the . A Lancaster without turrets could fly convert|50|mph|-1|abbr=on faster and be much more manoeuvrable.

On hearing the news of the bombing of :

The role of failure

Dyson strongly opposes . He is a Christian and has attended various churches from to . Regarding doctrinal or issues, he has said "I am neither a saint nor a theologian. To me, good works are more important than theology."

Trouble arises when either science or religion claims universal jurisdiction, when either religious or scientific dogma claims to be infallible. Religious creationists and scientific materialists are equally dogmatic and insensitive. By their arrogance they bring both science and religion into disrepute. The media exaggerate their numbers and importance. The media rarely mention the fact that the great majority of religious people belong to moderate denominations that treat science with respect, or the fact that the great majority of scientists treat religion with respect so long as religion does not claim jurisdiction over scientific questions.

As noted above, the is a favourite of science-fiction authors. See .

*Brower, Kenneth, 1978. "The Starship and the Canoe", Holt Rinehart and Winston.
*Schweber, Sylvan S., 1994. "QED and the men who made it : Dyson, Feynman, Schwinger, and Tomonaga". Princeton Univ. Press.