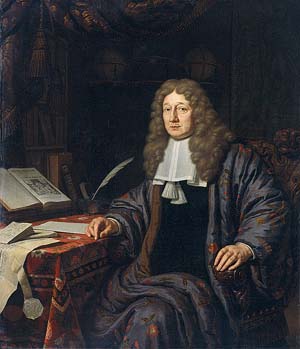 As a "burgemeester" of Amsterdam he ordered that the city canals should be flushed at high tide and that the polluted water of the town "secreten" should be diverted to pits outside the town instead of into the canals. He also promoted hygiene in and around the town's water supply.

"Huddes stones" were marker stones that were used to mark the summer high water level at several points in the city. They later were the foundation for the "NAP", the now Europe-wide system for measuring water levels.

Johannes Hudde studied law in Leiden, but turned to maths under the influence of his teacher . From 1654 to 1663 he worked under van Schooten and with his fellow students and they translated 's "La Géométrie" into Latin. Each of the students added to the work. Hudde's contribution consisted of a study on maxima and minima and a theory of equations.

Hudde corresponded with and , , and . Newton and Leibniz mention Hudde many times and used some of his ideas in their own work on .