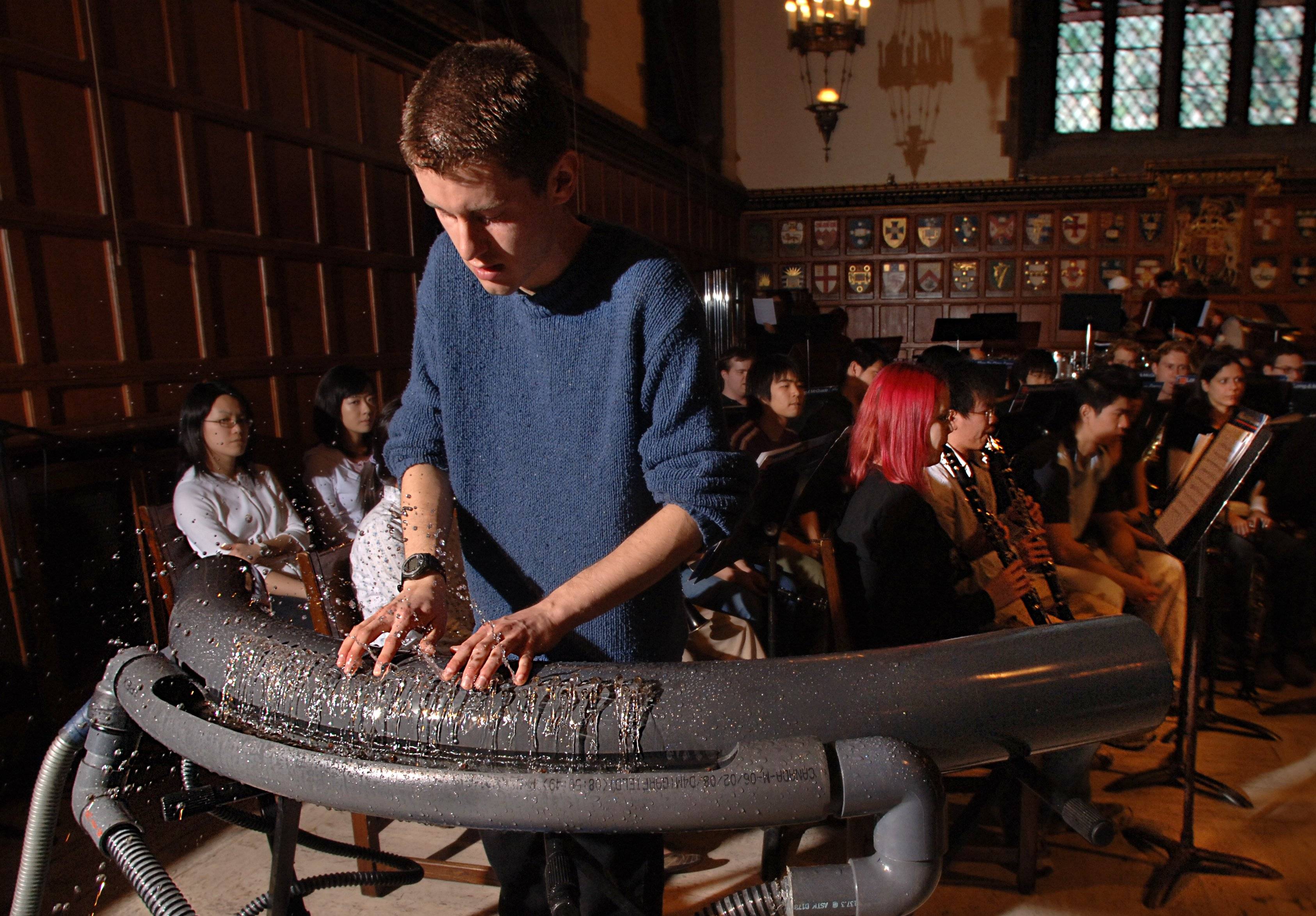 The term hydraulophone refers to one of:
*an interactive acoustic sound sculpture, typically in the form of a civic centerpiece used in landscape architecture

This article concerns itself with hydraulophones that are musical instruments, or sound sculptures.There are various kinds of hydraulophones, some of which have reeds (one or more reed for each finger hole), and some which are reedless but still have one or more mechanism or other sound-producing mechanism associated with each finger hole. Some hydraulophones include an underwater hydrophone pickup to allow the sounds produced by the water to be electrically amplified, whereas others do not use electric amplification. The use of electric amplification also allows various effects to be added, as with an electric guitar, as well as the possibility of making the hydraulophone function as a hyper-acoustic instrument (i.e. using computation to change the acoustic sound of the water into some other instrument)

Since humans do not breathe water, the water must be "blown" into the hydraulophone by way of a pump which can be hand-operated, wind operated, water powered, or electric (i.e. an electric pump). Unlike woodwind instruments in which there is one mouthpiece at the entrance to the flute chamber, hydraulophones have mouthpieces at every exit port from the chamber.

Whereas flutes have one mechanism for the mouth of the player, along with several finger holes that share the one fipple mechanism, the hydraulophone has a separate mouth/mouthpiece for each finger hole. A typical park-hydraulophone for installation in public spaces has 12 mouths, whereas a concert hydraulophone typically has 45 mouths.

Many hydraulophones are built with 12 water jets, one for each of the 12 notes.The standard compass starts on A, extending up an octave and a half to E. We say 1 1/2 octaves in the sense that the high E has a frequency that is (2 * 1.5 = 3) times as large as that of the low A, ie. an octave (8va) plus a perfect fifth (P5) higher.

The standard A to E range, in which it is possible to play with on any or all diatonic notes at the same time, is shown on the left side of the diagram. When playing only ally, some additional range is possible on certain hydraulophones, indicated here by small cue notes at the end-points.

Left, the extended notes come from closing key change valves or flexing key change levers, for sharpener, and flattener. To play a low G, one must be playing in C minor (with Ab) and close the flattener valve simultaneously. When playing on the high E jet, closing the sharpener valve produces an F.

With change-valves, the diatonic hydraulophone is polyphonic in the same sense as a so-called "chromatic harmonica" --- you can play chords and move all members of a chord down one semitone or up one semitone together, but the function of the valves is usually not separated to work on a per-note basis, so for example, you can play an A-minor chord, and flex the entire chord down to A-flat minor, but you can't easily play an A major chord without the use of polyphonic embouchure to bend only the middle note to a C# (which requires more skill than the average hydraulist has). Thus the "diatonic" hydraulophone is called "diatonic" conservatively to "under promise and over-deliver".

Finally, on the right, the additional extended range comes from the two octave-change valves (all notes can be shifted as many as two octaves down, or one octave up).

45-jet hydraulophones have a 3 1/2 octave range of A to E, , plus an additional A-flat below the lowest A.The playing compass (45 water jets) is the same as the sounding range (45 notes).

Usually only 12-jet hydraulophones are installed in public spaces, but the rare exception is the 45-jet south hydraulophone at the Ontario Science Centre which is a concert-hydraulophone having this precise range/compass. It is available to any member of the public, for use, free of any admission fees or other cost, and it runs 24 hours a day.

Relationship to other musical instruments in the orchestra

The first three-categories of the Hornbostel Sachs system fall under the first category of the physical organology system, as they all produce sound from matter in its solid state.

Classifications based on surrounding media

At the in 2007, the conference theme was Immersed Music and featured some immersed performances and concerts. This raised some important questions regarding the role of the surrounding medium (air or water) in which a musical instrument is played, as well as the role of water in other non-hydraulophonic instruments.

For example, Benjamin Franklin's glass (h)armonica remains a friction idiophone regardless of the fact that it is played by wet fingers. A version of the designed to be played underwater was recently created. This version is still a friction idiophone, not a hydraulophone.

Likewise, arrays of drinking glasses tuned with water are still idiophones, as the water is not what produces the initial sound, but is merely a tuning element.

Relationship between hydraulophone and the "strings, percussion, wind" taxonomy

Relationship to the pipe organ

Many hydraulophones include a separate water-filled pipe for each note, and have sound-production means similar to pipe organs (but with water rather than air), while maintaining the flutelike user-interface (finger embouchure holes).

Relationship to the piano

On a concert hydraulophone, the finger holes are arranged like the keys on a piano, i.e. there is a row of uniformly spaced holes close to the player, and a row of holes that are in groups of 2, 3, 2, 3, ..., a little further from the player. Whereas the piano and organ both have a similar kind of keyboard layout, the response ("key action") is different. Pianos tend to respond to velocity (how quickly a key is struck), whereas organs tend to respond to displacement (whether or not a key is pressed down). Hydraulophones tend to respond to absement (the time-integral of displacement), as well as to displacement, velocity, and to some degree jerk and jounce [http://wearcam.org/acmmm2006/] .

Relationship to instruments that use other states-of-H2O

Presently the world's largest hydraulophone is the main architectural centerpiece out in front of the , one of Canada's landmark architecture sites. It is also Toronto's only freely accessible aquatic play facility that runs 24 hours a day.

Because the water-spray from hydraulophones obscures vision (or when played underwater where visibility is poor), finger holes are sometimes encoded in Braille. Braille has the added advantage that the one-to-one correspondence between letters and numbers is the same as the standard A-minor hydraulophone, i.e. jet 1 is A, jet 2 is B, jet 3 is C, etc.. The skill (intricate sense of tactility) needed to play a hydraulophone well is also similar to the skill needed to read Braille.