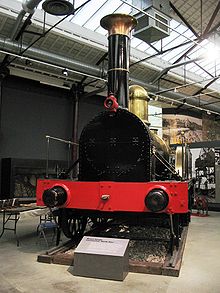 North Star replica (built in 1923 using some parts of the original) on display at Swindon, England, 2008

The Great Western Railway (GWR) Star Class of 2-2-2 broad gauge steam locomotives were used for passenger train work. Designed by Robert Stephenson, the class was introduced into service between November 1838 and November 1841, and withdrawn between April 1864 and September 1871.

A total of twelve Star Class locomotives were manufactured. Notably, they were given the romantic or colloquial (rather than scientific) names of astronomical bodies. By the time the last had been delivered, GWR engineer Daniel Gooch had designed and taken delivery of several of his larger Firefly Class.

North Star arrived at Maidenhead Bridge by barge on 28 November 1837; on 31 May 1838 it worked the inaugural train for the company's directors. In 1854 it was rebuilt with 16in × 18in cylinders and the wheelbase lengthened by a foot. It was withdrawn in 1871 but kept at Swindon, along with Lord of the Isles, until 1906.

'The north star' is one of two common alternative names for Polaris (its other being 'the pole star'). It is the only visible polar star in either hemisphere, and has long been used for navigation due to its constant fixed and unmoving appearance due north in the night sky.

This, the second Star Class, was not delivered until 14 months after the North Star. It had smaller 6ft 6in wheels, as had been intended when it was constructed for the New Orleans Railway; the wheelbase was 12ft 6in.

Named after 'the morning star', the common periodic name for the planet Venus (at times the brightest object in the night sky) when seen in the eastern sky just before sunrise, its motion then appearing to "lead" the sun for many mornings.

A 'bright star' is one clearly visible in the night sky, and generally denotes one of a few that appear to shine more than most.

After withdrawal, Dog Star was used as a stationary boiler at Paddington. Named after 'the dog star', the common name for Sirius, brightest star in the night sky and found in the constellation Canis Major (Lat: 'greater dog', from whence Sirius' common name).

Named after 'the evening star', the common periodic name for the planet Venus (at times the brightest object in the night sky) when seen in the western sky just before sunset, its motion then appearing to "follow" the sun for many evenings.

A 'lodestar' denotes any easily found star that is used to aid navigation (for example Polaris). Now an archaic term, in Middle English it meant 'course star' or 'lead star'.[1]

This locomotive was built with 15½ × 18in cylinders. It was rebuilt as a 4-2-2T tank locomotive. Its name is assisted with navigation: a polar star is one that appears fixed and unmoving over the Earth's North or South Pole and is thus used for a guide. The only one visible is Polaris (aka. the Pole Star or North Star).

This locomotive was rebuilt as a 4-2-2T tank locomotive. Its name has no particular association with any specific star, although prominent red stars visible from the northern hemisphere include Aldebaran, Arcturus, Antares and Betelgeuse.

This locomotive had a 14ft 6in wheelbase; at some time it was rebuilt as a 4-2-2T tank locomotive. On 7 September 1841 it ran over an earthslip near Chippenham, but the rest of the train (including Tiger, coupled behind) was derailed. The locomotive's name reflected the company's status: a 'rising star' is the term for any star appearing to climb the sky (rather than moving low across the horizon), and is often used metaphorically to mean someone "new" whose reputation is increasing rapidly.

This locomotive was built with 15½ × 19in cylinders and a 12ft 7in wheelbase. The four Persian 'royal stars' are Aldebaran, Regulus, Antares and Fomalhaut, said to guard the four quarters of the annual night sky.[2]

This locomotive was rebuilt as a 4-2-2T tank locomotive. A 'shooting star' is the descriptive term for a meteor.

This locomotive was built with 15½ × 19in cylinders and a 12ft 7in wheelbase. After withdrawal it was used as a stationary boiler at Oxford. Its name reflected the GWR's westerly direction: 'the western star' has no particular association with any specific star (although Antares was the quarter guardian of the western gate in Persian 'royal star' mythology).[2] 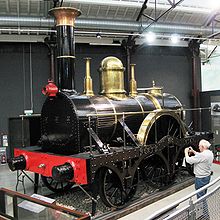 North Star replica (built in 1923 using some parts of the original) on display at Swindon, England, 2008

A non-working replica of North Star was constructed for the 1923 Cavalcade, and is now housed at Swindon Steam Railway Museum.

It made use of some of the parts of the original North Star, scrapped as recently as 1906, but is not capable of being steamed. Although it featured in the railway's centenary film in 1935, it was pushed by another locomotive.