Damarwulan
This article is about the legend of Damarwulan. For the film, see Damarwulan (film). 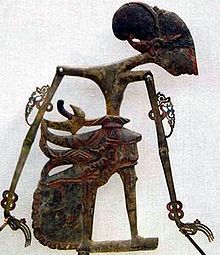 Depiction of the hero Damarwulan in a wayang kulit puppet.

Damarwulan is a Javanese cultural hero who appears in a cycle of stories used in the performance of wayang klitik, as well as Langendriya (female dance-opera) and ketoprak (popular theater). These stories tell of the struggles between the Majapahit and Blambangan kingdoms, in which Damarwulan gains honor. The stories are especially popular in East Java.

The Damarwulan legend is associated with the Majapahit court at the time of the queen Suhita, at which time there was a war with Blambangan. However, the names of the characters Damar Wulan ("radiance of the moon") and Menak Jingga ("red knight") suggest that it may incorporate elements of an older sun-moon myth. It is uncertain when the story was first recorded and by whom.[1] 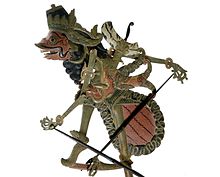 Depiction of the villain Menak Jingga in a wayang kulit puppet.

Damarwulan is a prince by birth, a nephew of the prime minister, Patih Logender, but was raised in the hermitage of his grandfather. Following his grandfather's advice, he goes to the Majapahit court seeking employment. His cousins, the prime minister's sons, mistreat him when he arrives. Patih Logender, not wanting him to compete with his own sons, assigns him as grass-cutter and stableboy. Though he is stripped of his fine garments, he still has his striking beauty. Rumors of this beauty eventually reach Anjasmara, the prime minister's daughter. She seeks him out secretly and they fall in love and are clandestinely married. One night, Anjasmara's brothers overhear voices in her chamber. They break in and try to kill Damarwulan, but he is able to overcome them. They flee to their father, who orders that Damarwulan be executed. Anjasmara pleas for her lover, and he doesn't execute Damarwulan, but imprisons the pair.

Meanwhile, Menak Jingga has wrote a letter to the queen asking for her hand. When the queen rejects him, he declares war on the Majapahit kingdom. He is successful in dispatching Majapahit's allies, and finally the kingdom is threatened by his forces directly. In distress, the queen announces that whoever kills Menak Jingga and brings her his head can have her hand. Worried when no saviors present themselves, she has a divine revelation that a young knight named Damarwulan can overcome him. She orders Patih Logender to release him from jail and send him forth on his mission.

Damarwulan, accompanied by his servants, makes his way to Blambangan. Arriving at night, he steals into the gardens and manages to overhear a conversation at the pavilion between two resentful captive princesses. Damarwulan enters the pavilion and confides in them, and, enraptured by his beauty, they become devoted to him. At this time, Menak Jingga decides to visit the princesses, and discovers Damarwulan. They fight, but Damarwulan is unable to hurt Menak Jingga, and, severely wounded, appears to die. Menak Jingga leaves, ordering his servants to guard the body. However, they fall asleep, and the two princesses carry him away, revive him, and explain to the secret of Menak Jingga's magic invulnerability, a club of yellow iron kept behind his headrest. If the king is hit on his left temple with this club, he will die. Risking their lives for the sake of their lover, the princesses manage to steal the club while the king is asleep. A second battle between Menak Jingga and Damarwulan follows, in which Damarwulan manages to behead the king. Successful, he returns to Majapahit, but the prime minister's sons ambush him outside the palace, killing him and presenting Menak Jingga's head to the queen. However, a hermit revives Damarwulan, and the queen learns what happened. In a final battle, Damarwulan defeats his cousins, is crowned King of Majapahit, and is permitted to retain Anjasmara as his other wife.