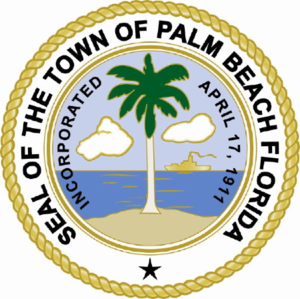 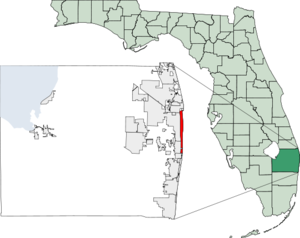 Palm Beach was established as a resort by , a founder of , who made the Atlantic coast accessible via his . The nucleus of the community was established by Flagler's two luxury resort hotels, the and The . West Palm Beach was built across Lake Worth as a service town, and has become a major city in its own right.

Flagler's houselots were bought by the beneficiaries of the , and in 1902 Flagler himself built a Beaux-Arts mansion, Whitehall, designed by the New York-based firm and helped establish the Palm Beach winter "season" by constant entertaining. The town was incorporated on .

Palm Beach is the easternmost town in Florida, located on a convert|16|mi|adj=on long .

Many of Palm Beach's residents are affluent, with a median household income of $94,562 and a median family income of $137,867. The town's affluence, and its "abundance of pleasures" and "strong community-oriented sensibility" were cited when it was selected in June, 2003 as America's "Best Place to Live" by "" magazine.

As of 2000, Palm Beach's had the fortieth highest percentage of n residents in the U.S., with 10.30% of the populace (tied with Pomona, NY and the of Lower Merion, PA). [cite web |url=http://www.epodunk.com/ancestry/Russian.html |title=Ancestry Map of Russian Communities |publisher=Epodunk.com |accessdate=2007-11-14] It also had the twenty-sixth highest percentage of n residents in the US, at 2.10% of the town's population (which tied with 19 other US areas). [cite web |url=http://www.epodunk.com/ancestry/Austrian.html |title=Ancestry Map of Austrian Communities |publisher=Epodunk.com |accessdate=2007-11-14]

The city is served by and [http://www.amtrak.com/servlet/ContentServer?pagename=Amtrak/am2Station/Station_Page&code=WPB] , as well as – all located in West Palm Beach connecting Palm Beach to .Public transportation is available through , did offering several routes within the town of Palm Beach until [http://www.palmbeachdailynews.com/news/content/news/bus0510.html] and connecting with the rest of the county.

The northern portion of Palm Beach is served by the Route 41 bus which travels from the northern most portion of Palm Beach at the inlet and then down to Royal Palm Way, across the Royal Park Bridge into West Palm Beach and up to the government center, and then follows the same route in reverse. This Island of Palm Beach was served by the Route 42 Palm Tran bus from Lantana in the south going along State Road A1A up to Royal Poncianna Way where it crosses over the Flagler Memorial Bridge into West Palm Beach to the government center and then back again for the southbound trip. Route 42 ended on May 10. 2008 due to low ridership. [http://www.palmbeachdailynews.com/news/content/news/bus0510.html]

Private vehicles and taxis are the predominant means of transport in Palm Beach. Bicycles are a popular transport on the island, although most areas have no bicycle trails, so safe and comfortable travel is not always assured. The Lake Trail, exclusively for pedestrian and bike traffic, extends from Royal Palm Way (State Road 704) in the south up to the north end of the island. The trail follows the edge of the (part of the intercoastal waterway) except for a section between the and the Biltmore Condominiums, where the trail follows the streets. Another break occurs to pass around the Sailfish Yacht Club in the north end of the island.

Traveling by bike along the ocean can be hazardous. Only a short section in the downtown area has sidewalks, and then largely used by pedestrians. Biking on the sidewalks is discouraged due to the chance of collision between bikes and walkers. The roads along the ocean are narrow and have small or no shoulders, making biking a potentially dangerous activity in those areas.

In the southern end of the island, south of Sloan's Curve, through South Palm Beach to East Ocean Avenue (linking to Lantana) is a two-mile long, relatively wide pedestrian path that is popular with walkers, runners, and bikers alike.

Notable residents — past and present