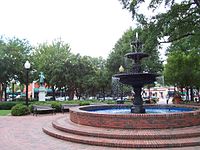 Marietta is a city located in central Cobb County, Georgia, United States,[3] and is its county seat.

As of the 2010 census, the city had a total population of 56,579, making it one of metro Atlanta's largest suburbs. Marietta is the third-largest of three principal cities (by population) of and is included in the Atlanta–Sandy Springs–Marietta, Georgia, metropolitan statistical area, which is included in the Atlanta-Sandy Springs-Gainesville, Georgia-Alabama (part) combined statistical area.

One story is the city was named for Mary Cobb, the wife of U.S. Senator and U.S. Supreme Court justice Thomas Willis Cobb.[4]

Homes had been built by early settlers near the Cherokee town of Big Shanty (now Kennesaw) by 1824.[5] The first plat was laid out in 1833. Like most towns, Marietta had a square in the center with a courthouse. The Georgia General Assembly legally recognized the town on December 19, 1834.[5]

Built in 1838, Oakton House[6] is the oldest continuously occupied residence in Marietta. The original barn, milk house, smoke house, and well house remain on the property. The spectacular gardens contain the boxwood parterre from the 1870s. Oakton served as Major General Loring's headquarters during the Battle of Kennesaw Mountain in 1864.[7]

Marietta was selected as the home base for the new Western and Atlantic Railroad, and business boomed.[5] By 1838, roadbed and trestles had been built north of the city. In 1840, political wrangling stopped construction for a time. In 1842, new management decided to use the area that would become Atlanta. In 1850, the railroad began operation, which was another boost to industry.[5]

Businessman and politician John Glover arrived in 1848. The town elected him mayor when it incorporated in 1852.[5]

Dr. Carey Cox promoted a "water cure", which developed into a spa that attracted patients to the area. The Cobb County Medical Society recognizes him as the county's first physician.[5]

By the time the American Civil War began in 1861, Marietta had recovered from the fires.[5]

In April 1862, James Andrews, a civilian working with Union soldiers, came down to Marietta dressed in civilian clothing and spent the night in the Fletcher House hotel (later known as the Kennesaw House and now the home of the Marietta Museum of History) located right in front of the railroad tracks. James Andrews and his men, known as the Andrews Raiders, had great plans to end the Civil War early. The Andrews Raiders got aboard the waiting train on the morning of April 12, 1862, with the rest of the passengers. When the train stopped in the town of Big Shanty, now known as Kennesaw, for the passengers to have breakfast, Andrews and the Raiders got back on the train and stole the engine and the car behind it, which carried the fuel. The train, called The General, and Andrews' Raiders had begun the episode now known as the Great Locomotive Chase.[5]

General William Tecumseh Sherman invaded the town during the Atlanta Campaign in the summer of 1864. In November 1864, General Hugh Kilpatrick set the town ablaze, the first strike in Sherman's March to the Sea.[5]

One of the few houses left standing, the Marietta Hotel, was later burned by the town residents who found out the owner of the building had been a Yankee spy during the Civil War.[citation needed]

The Marietta Confederate Cemetery is located in the city.

Leo Frank was lynched at Frey's Gin, just east of Marietta in 1915. (Frey was the county sheriff at the time.) Although it was for the alleged murder of Mary Phagan in Atlanta, it was primarily motivated by religious intolerance, as Frank was Jewish. This incident led to the founding of the Anti-Defamation League.

In the late 1960s, an amendment was passed to the Georgia State Constitution, giving home rule to the 159 counties in Georgia. Led by Ernest Barrett, the first county commission voted to demolish the historic county courthouse, which was located on the northeast corner of Roswell Street (former Georgia 120) and East Park Square (former Georgia 5) since 1888. This loss is now regarded as one of the county's biggest mistakes, and state law now requires a county-wide referendum before destroying historic county courthouses. Other historic buildings, such as the Works Progress Administration building, were also torn down at the time. The Glover Locomotive Works, which had been abandoned, was also torn down in the late 1990s despite its historic significance (although it was just outside city limits). As of 2010[update], another courthouse is under construction for the superior courts, adapting some minor design elements of the demolished courthouse.

The southwest corner of the square is also the origin for all street addresses in the county grid plan.

The city has six historic districts, some on the National Register of Historic Places. A seventh, along Kennesaw Avenue, is proving more controversial, and is still being considered as of March 2010[update]. The city's welcome center is located in the historic train depot.

There were 23,895 households out of which 27.8% had children under the living with them, 35.4% were married couples living together, 13.8% had a female householder with no husband present, and 45.5% were non-families. 32.8% of all households were made up of individuals and 6.9% had someone living alone who was 65 years of age or older. The average household size was 2.39 and the average family size was 3.05.

Incorporated as a village in 1834 and as a city in 1852, the city of Marietta is organized under a form of government consisting of a Mayor, City Council and City Manager. The City Council is made up of representatives elected from each of seven districts within the city and a Mayor elected at-large.

Terms of office are for four years and the number of terms a member may serve are unlimited. There are seven councilman, each representing a separate ward.[9]

Dobbins Air Reserve Base on the south side of town and a Lockheed Martin manufacturing plant are among the major industries in the city. The Lockheed Georgia Employees Credit Union, now open to non-employees, is based in Marietta.

The city operates Marietta Power under the auspices of the Board of Lights & Water (BLW). The BLW is also party to the Cobb-Marietta Water Authority. The city formerly operated Marietta FiberNet, a fiber optic network, but sold the network to American Fiber Systems for a substantial financial loss.[11]

All of the public schools in Marietta proper are operated by the Marietta City Schools (MCS), while the remainder of the schools in Cobb County, but outside the city limits, are operated by the Cobb County School District, including all of the county's other cities. MCS is one of the smallest school districts in metro Atlanta,[citation needed] with one high school, Marietta High School, grades 9-12; a middle school, Marietta Middle School, grades 7 and 8; Marietta Sixth Grade Academy; and several elementary schools: A.L. Burruss, Dunleith, Hickory Hills, Lockheed, Marietta Center for Advanced Academics, Park Street, Sawyer Road, and West Side.[12]

Southern Polytechnic State University (SPSU), Chattahoochee Technical College and Life University are located in Marietta, serving more than 20,000 students in more than 90 programs of study. (CTC is actually in the Fair Oaks census-designated place, just outside the city limits.) WGHR at SPSU is the only radio station actually broadcasting from a studio within the city, although WFTD AM 1080 and WKHX-FM 101.5 (originally WBIE and WBIE-FM) have it as their city of license, as does WFOM AM 1230, and broadcast translator stations W222AF FM 92.3 and W49DE TV 49.

Downtown is the town square and former location of the county courthouse. The square is the site of several cultural productions and public events, including a weekly farmers' market. Incorporated in 1993, Theatre in the Square is a year-round professional theater, producing a five-show subscription season as well as summer and holiday shows. The Strand Theatre has been renovated back to its original design and features classic films and other events. The Marietta Museum of History exhibits the history of the city and county. The museum is home to thousands of artifacts including items from Marietta residents and businesses. The Marietta Gone with the Wind Museum, also called "Scarlett on the Square", houses a collection of memorabilia related to both the book and the film.

The CSX freight trains between Atlanta and Chattanooga (Western & Atlantic Subdivision) still run a block west of the town square, past the train depot (now the Visitor Center) and the Kennesaw House, one of only four buildings in Marietta not burned to the ground in Sherman's March to the Sea. The Kennesaw House is home to the Marietta Museum of History[14] which tells the history of Marietta and Cobb County.