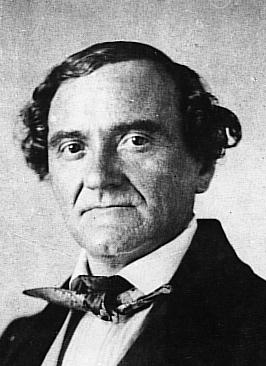 Johann Nepomuk Eduard Ambrosius Nestroy (, &ndash; , ) was an singer, actor and, primarily, a .

Nestroy was born in , . After a career as an opera singer in several an cities from 1822 to 1831, Nestroy returned to his native Vienna and took up writing and acting. This combination of careers has caused Nestroy to be called the "Austrian Shakespeare".

Nestroy's career as a playwright was an immediate success: his 1833 play "" was a major hit. He soon became a leading figure in Austrian culture and society. Nestroy succeeded as the leading actor-dramatist on the Viennese commercial stage, often referred to as the Viennese Volkstheater.

Whereas Raimund concentrated on romantic and magical fantasies, Nestroy used for and . Working at the time of conservative minister Clemens Metternich, he had to carefully draft his plays to skirt the strict in place. His interest in word play was legendary, and his characters often mixed with less-than-successful attempts at more "educated" speech. held an important role in his work, with songs elaborating the theme or helping on with the plot.Nestroy wrote over eighty comic plays in the 1840s and 1850s. Among the most important were the burlesque comedies "", "", "" (made into the "Titus macht Karriere" by ), "" and "", all of which were marked by social criticism and biting satire. He died in , Austria.

About half of Nestroy's works have been revived for the modern German-speaking audience and many are part and parcel of today's Viennese repertoire. However, few have ever been translated into English. Only one, "Einen Jux will er sich machen", has become well known to English-speaking theatregoers. Interestingly, it has become a classic more than once. It was first adapted as 's "" (which later became the musical "Hello, Dolly!") and later achieved success as the comic masterpiece "On the Razzle", which was translated by and adapted by .

Nestroy has a square&mdash;Nestroyplatz&mdash;named after him in Vienna, as well as a station on Line 1 of the , which opened in 1979. When the had to be rebuilt after its collapse in 1976, the tender was won by a consortium named "Project Johann Nestroy". The official name of the newly built bridge is probably "Johann Nestroy Brücke" [http://derstandard.at/?url=/?id=2983102] [http://oesterreich.orf.at/wien/stories/44339/] [http://www.kleinezeitung.at/nachrichten/chronik/518887/index.do] , but that name doesn't seem to have any currency.

The most important German speaking Theatre Award is named after Nestroy. The "Nestroy Award" is an annual award for German Theatre with Oscar-like categories. Its ceremony is held in Vienna and being broadcast live to the National Television.