Horsecar
This article is about equine-powered railcars. For the type of stock car used to transport racehorses, see Horse cars. 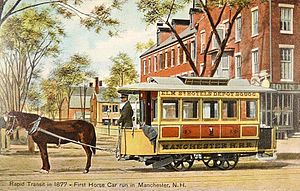 Manchester, New Hampshire's first horsecar, dating from 1877, and on display about 1908

A horsecar or horse-drawn tram is an animal-powered streetcar or tram.

These early forms of public transport developed out of industrial haulage routes that had long been in existence, and from the omnibus routes that first ran on public streets in the 1820s, using the newly improved iron or steel rail or 'tramway'. These were local versions of the stagecoach lines and picked up and dropped off passengers on a regular route, without the need to be pre-hired. Horsecars on tramlines were an improvement over the omnibus as the low rolling resistance of metal wheels on iron or steel rails (usually grooved from 1852 on), allowed the animals to haul a greater load for a given effort than the omnibus and gave a smoother ride. The horse-drawn streetcar combined the low cost, flexibility, and safety of animal power with the efficiency, smoothness, and all-weather capability of a rail right-of-way. 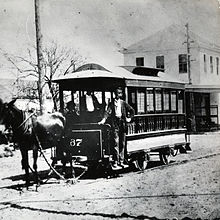 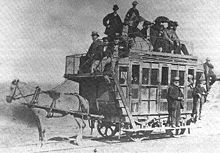 The first rail passenger services in the world were started by the Oystermouth Railway in Wales, using specially designed carriages on an existing tramline built for horse-drawn freight dandies. Fare-paying passengers were carried on a line between Oystermouth, Mumbles and Swansea Docks from 1807.

In the United States the very first streetcar appeared on November 26th, 1832, on the New York and Harlem Railroad in New York City.[1] The earliest streetcars used horses and sometimes mules, usually two as a team, to haul the cars. Rarely, other animals were tried, including humans in emergency circumstances. By the mid 1880s, there were 415 street railway companies in the USA operating over 6,000 miles of track and carrying 188 million passengers per year using horsecars.

In spite of its early start, it took many years for horse-drawn street cars to become widely acceptable across Britain; the American George Francis Train first introduced them to Birkenhead in 1860 but was jailed for "breaking and injuring" the highway when he next tried to lay the first tram tracks on the roads of London. An 1870 Act of Parliament overcame these legal obstacles by defining responsibilities and for the next three decades many local tramway companies were founded, using horse-drawn carriages, until replaced by cable, steam or electric traction. Many companies adopted a design of a partly enclosed double-decker carriage hauled by two horses. The last horse-drawn tram was retired from London in 1915. 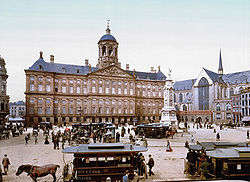 A busy horsecar hub at Dam Square in Amsterdam, circa 1900

The first horse-drawn rail cars on the continent of Europe were operated from 1828 by the České Budějovice - Linz railway. Europe saw a proliferation of horsecar use for new tram services from the mid-1860s, many towns building new networks.

Problems with horsecars included the fact that any given animal could only work so many hours on a given day, had to be housed, groomed, fed and cared for day in and day out, and produced prodigious amounts of manure, which the streetcar company was charged with storing and then disposing of. Since a typical horse pulled a streetcar for about a dozen miles a day and worked for four or five hours, many systems needed ten or more horses in stable for each horsecar.

Horsecars were largely replaced by electric-powered streetcars following the invention by Frank J. Sprague of an overhead trolley system on streetcars for collecting electricity from overhead wires. His spring-loaded trolley pole used a wheel to travel along the wire. In late 1887 and early 1888, using his trolley system, Sprague installed the first successful large electric street railway system in Richmond, Virginia. Long a transportation obstacle, the hills of Richmond included grades of over 10%, and were an excellent proving ground for acceptance of the new technology in other cities. Within a year, the economy of electric power had replaced more costly horsecars in many cities. By 1889, 110 electric railways incorporating Sprague's equipment had been begun or planned on several continents.

An original 1886 horsecar in the 1911 parade celebrating groundbreaking for the Panama-California Exposition at San Diego, California 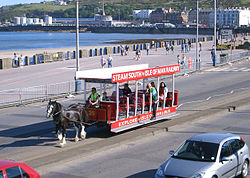 A horse tram in Douglas on the Isle of Man in 2007, showing the conductor standing on the stepboard to collect fares 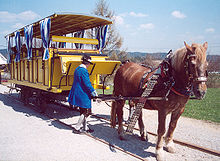 Reconstructed portion of the České Budějovice - Linz railway in Austria

Many large metropolitan lines lasted well into the early twentieth century. New York City had a regular horsecar service on the Bleecker Street Line until its closure in 1917. Pittsburgh, Pennsylvania had its Sarah Street line drawn by horses until 1923. The last regular mule-drawn cars in the USA ran in Sulphur Rock, Arkansas until 1926 and were commemorated by a U.S. Postage Stamp issued in 1983.[2] Toronto's horse-drawn streetcar operations ended in 1891. In other countries animal-powered tram services often continued well into the 20th century; the last mule tram service in Mexico City ended in 1932, and a mule tram in Celaya, Mexico survived until 1954.[3]

A few original horsecar lines have survived, or been revived, as tourist attractions. The Douglas Bay Horse Tramway has a history of continuous opertion, and still runs in Douglas on the Isle of Man. The Victor Harbor Horse Drawn Tram, in the Australian town of Victor Harbor, and the Döbeln Tramway, in the German town of Döbeln, have both been revived after a period of closure. Additionally, replica horsecar lines have been created in various locations. Such lines are in operation at several Disney theme parks as part of the parks' Main Street, U.S.A. "themed land".

Tropical plantations (for products such as henequen and bananas) made extensive use of animal-powered trams for both passengers and freight, often employing the Decauville narrow-gauge portable track system. In some cases these systems were very extensive and evolved into interurban tram networks (as in the Yucatan, which sported over 3,000 kilometers of such lines). Surviving examples may be found in both the Yucatan[4] and Brazil.[5]