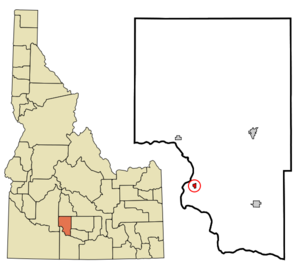 mapsize =
map_caption = Location in Gooding County and the state of

Hagerman is the home of the of the U. S. National Park Service. No other fossil beds preserve such varied land and aquatic species from the time period called the Pliocene Epoch. More than 180 animal species of both vertebrates and invertebrates and 35 plant species have been found in hundreds of individual fossil sites. Eight species are found nowhere else, and 43 were found here first. The , "Equus simplicidens", exemplifies the quality of the fossils. fossil beds have produced 20 complete skeletons and a number of partial skeletons of this zebra-like ancestor of today’s horse. (Adapted from the Hagerman Fossil Beds Official Map and Guide.) More information is available at the monument website [http://www.nps.gov/hafo] .

There were 277 households out of which 23.8% had children under the age of 18 living with them, 50.9% were married couples living together, 9.0% had a female householder with no husband present, and 35.7% were non-families. 29.6% of all households were made up of individuals and 15.9% had someone living alone who was 65 years of age or older. The average household size was 2.37 and the average family size was 2.93.