Clarens is a small town situated in the foothills of the Maluti Mountains in the Free State province of South Africa and nicknamed the "Jewel of the Eastern Free State". It was established in 1912 and named after the town of Clarens in Switzerland where exiled Paul Kruger spent his last days.

Clarens is an artists' haven with many well-known artists either living in or frequenting the village, with many art galleries scattered around the village square and the town. The tranquil village ambience combined with scenic views and a mild climate makes has made Clarens a popular getaway for city dwellers from Johannesburg, Bloemfontein and Durban, among other places. Clarens is known for its spectacular sandstone mountains and wonderful climate; it is one of the most picturesque spots in South Africa and has recently been acclaimed as the best Trout Fishing waters in South Africa.

The Golden Gate Highlands National Park with its sandstone formations and cliffs is 16.9 km from Clarens.

Close to Clarens is the outlet from the Lesotho Highlands Water Project that brings fresh water from Lesotho to feed into the As River (Afrikaans for "axle" because a wagon broke its axle when crossing, but has been mistakenly translated into English as "ash"), Liebenbergsvlei and Wilge Rivers into the Vaal Dam. Water from the Vaal Dam is then abstracted, treated and pumped to the Rand Water supply area.

Clarens is part of the scenic Highlands Route and is surrounded by mountains. The Rooiberge is the range encompassing the village, whilst further towards the southeast are the Maluti mountains in shades of purple and blue. All around are the sandstone cliffs with their multi-coloured layers - these horizontal strata are a characteristic feature of the area. Many homes in the Clarens Valley are made from or clad in sandstone.

There are various establishments offering accommodation, including bed & breakfast, self catering, lodge, backpackers and farm guest houses in the surrounding area. Activities include: horse riding, abseiling, hiking, fly fishing, fossil hunting, white water rafting and golf. There is often live music on the weekends . There are a few private information centers run in the town where more information can be found out. 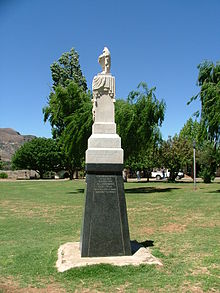 A farm called "Leliehoek" (English: Lily Corner) was bought from Mr. Hermanus Steyn in 1910, and in 1911 Mr. Piet de Villiers sold his farm "Naauwpoort" (situated near the Titanic rock) to a company wanting to establish a village there. These two farms were divided into erven and sold for fifty pounds each. A commission was appointed in 1912 to finalize negotiations, and a decision was made to name the village "Clarens" in honour of President Paul Kruger’s influence in the area. This came about in the following way - During the Free_State-Basotho War of 1865 - 1866, five "burghers" from the Transvaal were murdered in the Eastern Free State, and as a result war was declared between the Transvaal and the Basotho leader, Moshoeshoe. Paul Kruger, together with a commando of burghers, defeated the Basotho at the Battle of Naauwpoortnek (near Titanic rock). President Paul Kruger spent his last days as a voluntary exile in the attractive village of Clarens in Switzerland, and thus Clarens was named for this Swiss town. A monument was erected on the farm "Ararat" just outside Clarens, in honour of the five burghers murdered by the Basotho on the 29th of September 1865, during the siege of Naauwpoort. This monument was later moved to Clarens placed in the central town square, where it stands to this day.

Situated 336 km from Johannesburg, 284 km from Bloemfontein, 389 km from Durban.