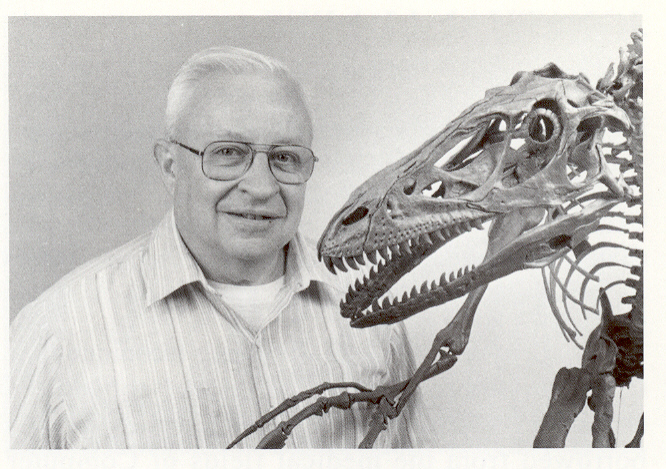 John H. Ostrom (, &ndash; , ) was an American who revolutionized modern understanding of s in the 1960s, when he demonstrated that dinosaurs are more like big non-flying s than they are like s (or "saurians"), an idea first proposed by in the 1860s, but which had garnered few supporters. The first of Ostrom's broad-based reviews of the and of the primitive bird "" appeared in 1976. His reaction to the eventual discovery of in , after years of acrimonious debate, was bittersweet (Gentile, 2000).

He was born in and studied at . He planned to be a physician like his father, but changed his mind after reading 's book "The Meaning of Evolution". He enrolled at and studied with .

Ostrom taught for one year at and then spent five years at before going to Yale. Ostrom was a professor at where he was the Curator Emeritus of Vertebrate Paleontology at the , which has an impressive fossil collection originally started by . He died from complications of at the age of 77 in .

His 1964 discovery of "" is considered one of the most important fossil finds in history [http://www.ucmp.berkeley.edu/diapsids/saurischia/dromaeosauridae.html] . "Deinonychus" was an active predator that clearly killed its prey by leaping and slashing or stabbing with its "terrible claw". Evidence of a truly active lifestyle included long strings of running along the tail, making it a stiff counterbalance for jumping and running. The conclusion that at least some dinosaurs had a high metabolism, and thus were at least partially , was popularized by his student , and changed the impression of dinosaurs as , sluggish and slow lizards which had prevailed since the turn of the century.

This changed how dinosaurs are depicted by both professional dinosaur illustrators, and in the public eye. The find is also credited with triggering the "", a term coined in a 1975 issue of "" by Bakker to describe the renewed debates causing an influx of interest in paleontology, which has lasted from the 1970s to the present and has doubled recorded dinosaur diversity.

"Archaeopteryx" and the origin of flight, and hadrosaur herds

Ostrom's interest in the dinosaur-bird connection started with his study of what is now known as the "Archaeopteryx". Discovered in 1855, it was actually the first specimen recovered but, incorrectly labeled as " crassipes", it languished in the in the until Ostrom's 1970 paper (and 1972 description) correctly identified it as one of only eight "first birds" (counting the solitary feather).

Ostrom's reading of fossilized "" trackways also led him to the conclusion that these duckbilled dinosaurs traveled in herds.

* [http://www.bbc.co.uk/science/horizon/1998/dinogarden.shtml Dinosaurs in Your Garden]