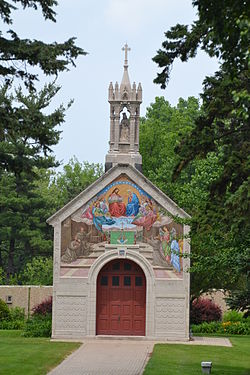 Oak Brook is a village in DuPage and Cook Counties, in Illinois.[2] The population was 8,702 at the 2000 census. A suburb of Chicago, it is the headquarters of McDonald's and Lions Clubs International.

Oak Brook was incorporated as a Village in 1958, due in large part to the efforts of Paul Butler, a prominent civic leader and landowner whose father had first moved to the vicinity in 1898 and opened a dairy farm shortly thereafter. Prior to incorporation, the name Oak Brook was used by local residents to distinguish their community from neighboring Hinsdale and Elmhurst, going back to the founding of the Oak Brook Civic Association almost two decades earlier.[3]

The original boundaries were smaller than the present extent of the Village, but a considerable amount of land was acquired soon after the founding of the Village, including the land that is now the site of the Oakbrook Center shopping mall, which opened in 1962.

Paul Butler's interest in sport was reflected in the Oak Brook Sports Core, which features polo fields, a golf course (which was at one time the venue for the Western Open), swimming and tennis facilities, and other recreational facilities not commonly found in a village of this size.[4]

In October 2009, the employees of the Oak Brook Public Library invited the Teamsters to represent them.[5]

The village's proximity to the junction of Interstates 88, 294, and 290, about 20 miles (32 km) west of downtown Chicago, makes access by car easy for residents of Chicago and other suburbs. Although Oak Brook is not directly served by any CTA or Metra trains, the commercial corridor along 22nd Street is served by several PACE bus routes, and train stations in neighboring villages offer commuter train access to downtown Chicago.

Most of Oak Brook consists of residential subdivisions, with the exception of the Oakbrook Center shopping mall and other retail and office properties along 22nd Street and the Interstate 88 corridor in the northern part of the village.

There were 3,124 households out of which 26.9% had children under the age of 18 living with them, 76.6% were married couples living together, 4.5% had a female householder with no husband present, and 17.1% were non-families. 15.3% of all households were made up of individuals and 8.9% had someone living alone who was 65 years of age or older. The average household size was 2.74 and the average family size was 3.04.

Oak Brook has its own school district, District 53, which includes Brook Forest Elementary School (grades K-5) and Butler Junior High School (grades 6–8). Students that live within the district attend Hinsdale Central High School, district 86. However, some residents of the village are within other DuPage county school districts, attending schools in Elmhurst, Downers Grove or Villa Park.

McDonald's Plaza, the headquarters of McDonald's

While many Oak Brook residents commute to jobs scattered throughout the Chicago metropolitan area, Oak Brook is also the home of many corporate offices. The world headquarters of McDonald's Corporation is in Oak Brook. McDonald's moved into the Oak Brook facility from an office within the Chicago Loop in 1971.[9] Other corporations include Ace Hardware,[10] Blistex,[11] Crowe Horwath,[12] Dominick's,[13] Federal Signal Corporation,[14] Papermate,[15] Sharpie,[16] and Follett Higher Education Group.[17] Global non-profit organizations such as Lions Clubs International[18] and Institute in Basic Life Principles[19] are also based there.

According to the Village's 2009 Comprehensive Annual Financial Report,[20] the top employers in the city are:

In the medical drama series ER, Carter's parents are said to live in Oak Brook, Illinois, referencing it as a rich area.