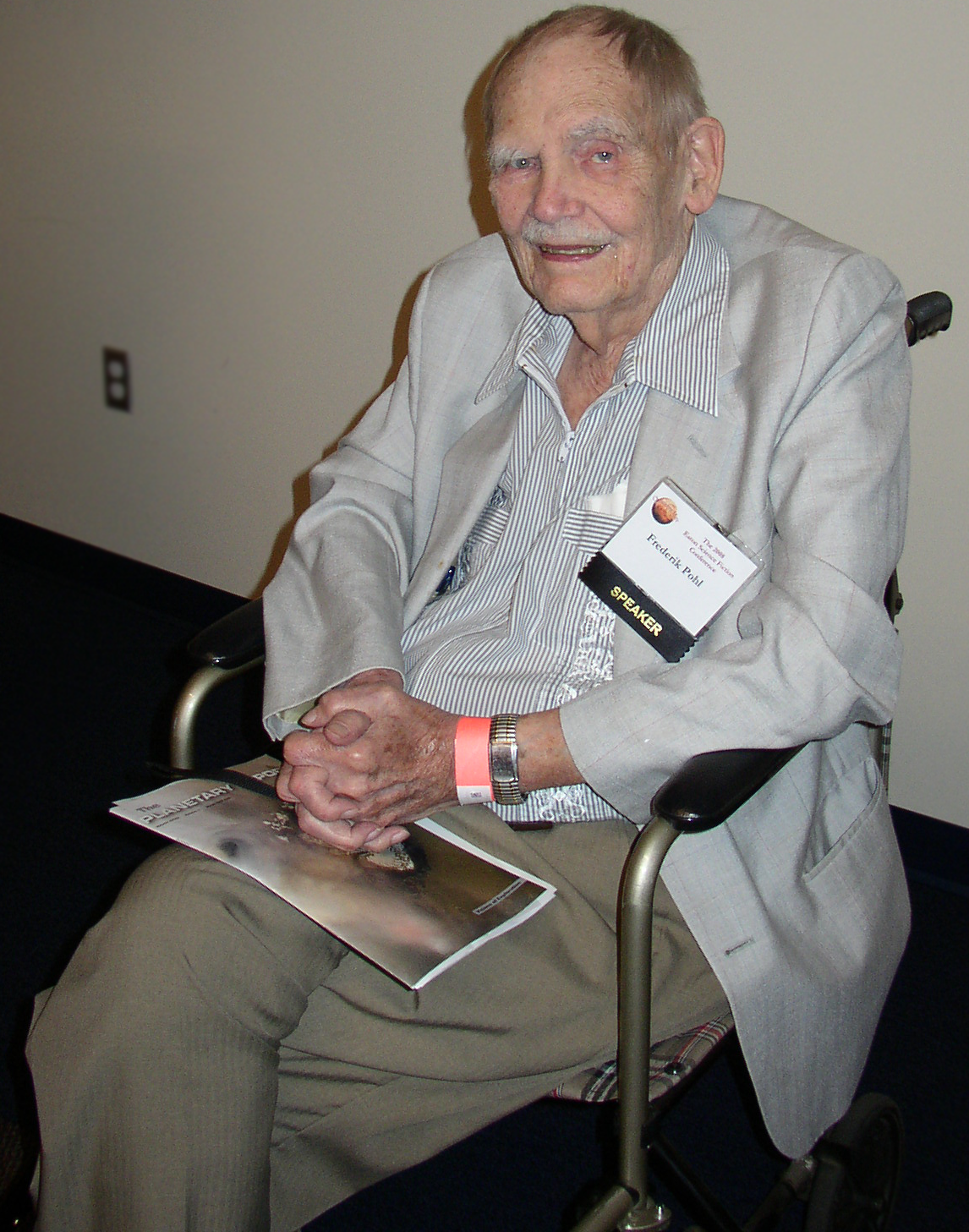 Frederik George Pohl, Jr. (born , ) is a American writer, editor and fan, with a career spanning over sixty years. From about 1959 until 1969, Pohl edited "Galaxy" magazine and its sister magazine "if", winning the Hugo for "if" three years in a row. His writing also won him three Hugos and multiple . He became a Nebula Grand Master in 1993.

Pohl's family moved a number of times in his early years. His father held a number of jobs, and the Pohls lived in such wide-flung locations as , , , and the . The family settled in when Pohl was around seven. He attended the prestigious high school, but due to the , Pohl dropped out of school at the age of fourteen to work. While still a teenager he began a lifelong friendship with fellow writer , also a member of the New York-based fan group.

In 1936, Pohl joined the , an organization in favor of trade unions and against racial prejudice and Hitler and Mussolini. He became President of the local Flatbush III Branch of the YCL in Brooklyn. Pohl says that after Stalin-Hitler pact in 1939 the party line changed and he could no longer support it, at which point he left voluntarily.

From 1939 to 1943, he was the editor of two - "" and "". [cite web |url=http://www.locusmag.com/2000/Issues/10/Pohl.html |title=Frederik Pohl: Chasing Science |publisher=Locus Online |month=October | year=2000] In his own autobiography, Pohl says that he stopped editing the two magazines at roughly the time of German invasion of the Soviet Union in 1941.

Pohl has been married several times. His first wife, , was another Futurian; they were married in August 1940 but divorced during World War II. He then married in Paris in August, 1945 while both were serving in Europe. In 1948 he married , an important figure in the world of science fiction, with whom he has one daughter, Ann. Merril and Pohl divorced in 1953. From 1953–1982 he was married to . He is currently married to science fiction editor and academic , , whom he married in 1984.

During the war Pohl served in the US Army (April 1943-November 1945), rising to Sergeant as an air corp weathermen. After training in Illinois, Oklahoma, and Colorado, he primarily was stationed in Italy.

Pohl started his career as Literary Agent in 1937, but it was a sideline for him until after WWII, when he began doing it full time. He ended up "representing more than half the successful writers in science fiction"--for a short time, he was the only agent Isaac Asimov ever had--though, in the end it was a failure for him as his agenting business went bankrupt in the early 1950s.

He collaborated with friend and fellow Futurian , co-authoring a number of short stories and several s, including a n of a world ruled by the agencies, "" (a belated sequel, "The Merchants' War" [1984] was written by Pohl alone, after Kornbluth's death). This should not to be confused with Pohl's "", an unconnected 1972 novella which includes biting satire on runaway and first introduced the .

A number of his short stories were notable for a satirical look at and advertising in the 1950s and 1960s: "The Wizard of Pung's Corners", where flashy, over-complex military hardware proved useless against farmers with shotguns, and "The Tunnel Under the World", where an entire community is held captive by advertising researchers.

From the late 1950s until 1969, he served as editor of "Galaxy" and "if" magazines, taking over at some point from the ailing . Under his leadership, "if" won the Hugo Award for Best Professional Magazine for 1966, 1967 and 1968. [cite web |url=http://www.worldcon.org/hc.html#pm |publisher=worldcon |title=The Hugo Awards by Category] was his assistant editor at "Galaxy" and "if".

His works include not only science fiction but also articles for "" and "". For a time, he was the official authority for the on the subject of Emperor Tiberius.

He was the eighth President of , taking office in 1974.

Pohl has been a resident of , and currently resides in .

Other novels (not part of a series)