Collinsville is a city located mainly in Madison County, and partially in St. Clair County, both in Illinois. As of the 2010 census, the city had a population of 26,016. Collinsville is approximately 12 miles from St. Louis, Missouri[1] and is considered part of that city's Metro-East area.[2] Famously, it is the home of the Brooks Catsup Bottle Water Tower—the world's largest ketchup bottle—and is the world's horseradish capital [1].

Collinsville is the self-proclaimed "Horseradish Capital of the World", and sponsors an annual Horseradish Fest. The area is said to produce 85% of the world's horseradish, of such high quality that Germany and China (key users of the herb) import it for gourmet use. Known for having a large ethnic Italian population, Collinsville hosts an annual Italian Fest in the Fall. 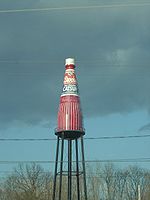 Collinsville is also home of the Brooks Catsup Bottle Water Tower, "the world's largest catsup bottle", a 170-foot-tall (52 m) water tower in the shape of a ketchup bottle.

The Cahokia Mounds State Historic Site is located within the city limits of Collinsville. The largest Pre-Columbian settlement north of Mexico, this was one of the first eight UNESCO World Heritage Sites designated within the United States. At its peak about 1200 CE, it had a population of 20,000-30,000, more than any city in the present-day United States until after 1800. It includes Monks Mound, the largest prehistoric earthwork in the Americas, and more than 70 surviving smaller mounds. Monks Mound is larger at its base than the Great Pyramid of Giza. The complex also includes a reconstructed Woodhenge, used for complex astronomical sightings. There is a museum and visitors' center.

During World War I, a Collinsville mob lynched a German-American citizen, the only such murder in the country. On April 5, 1918, a mob of men numbering in the hundreds took Robert Prager from his home and paraded him through the streets barefoot and wrapped in an American flag, forcing him to sing patriotic songs. The Collinsville police interceded and took him into protective custody. A group formed outside of the city jail, however, and, threatening to burn it down, were permitted entry. Two men found Prager hiding in the basement. They took him outside and the mob marched him to the outskirts of town, where they lynched him. His final request was to be buried in the American flag. Eleven men stood trial for the murder, but all were acquitted.[5]