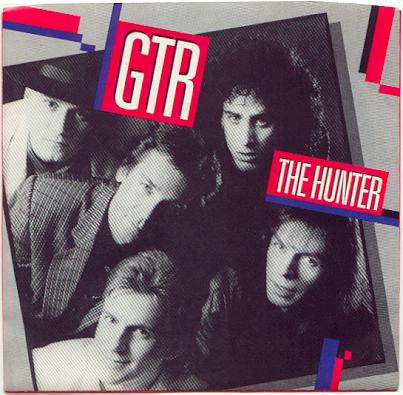 GTR was a supergroup founded in by ex-Genesis guitarist and Yes and Asia guitarist Steve Howe. Other members included vocalist (and former ) (ex-Moby Dick, Nightwing, ), bassist (ex-, Toyah, , ), and American drummer (ex-, later of fame). GTR were notable for attempting to create a band with guitar and synthesiser sounds, but without the use of conventional keyboard synths, using guitar/synthesisers instead. Hackett and Howe's guitars were outfitted with Roland synthesiser trigger pickups, which used the vibrations of the strings to create MIDI signals used to play the synthesizers. While this may have worked in the studio, they were forced to take a keyboardist on the road because of the poor tracking qualities of the guitar synths.

GTR's only studio album, a self-titled LP produced by of Asia, released by , went gold and spawned a hit single, "When the Heart Rules the Mind", which stayed in the charts for 16 weeks. [ [http://www.connollyco.com/discography/gtr/heart7.html When The Heart Rules The Mind ] ] Another single, "The Hunter," received some video coverage and modest airplay. While GTR's album was a chart success, it is highly debated with many fans of Genesis and Yes. Some fans claim it has rather substandard filler material and some criticism directed at Max Bacon's strident tenor. J.D. Considine's review of the album simply read, "SHT.". [ [http://www.lukeford.net/profiles/profiles/jd_considine.htm J.D. Considine ] ] However, it has become somewhat of a cult classic among fans, with some of them regarding it the best work ever. [ [http://www.asiarock.com/categories/gtr.html Asiarock.com ] ] Dead link|date=July 2008 After a poorly conceived trans-Atlantic tour, Hackett's dissatisfaction with the group's financial management spelled the end of the project. Subsequent to an abortive lineup change in , Hackett left GTR, stating it had been "interesting for about five minutes". Other fans have also speculated that Howe and Hackett did not get on well. Hackett's subsequent comments about GTR have been ambivalent at best. He once said of the group, "There are artistic limitations with any successful band and it "was" a successful band." [ [http://members.shaw.ca/pleasedonttouch/gtr.html Please Don't Touch! - GTR ] ]

The King Biscuit recording from Los Angeles demonstrated that the group was extremely tight and well practised live. Tracks include versions of Yes's "Roundabout" and a re-working of the Genesis classic "I Know What I Like" as well as songs from the band's sole studio album, Hackett's and Howe's solo LPs and the U.S. Top 40 single "When The Heart Rules The Mind". [http://www.camino.co.uk/detail.html?cat=37&productref=24] Also, a preview of a new song, "Prizefighters", was included on this collection. The song was later developed for Hackett's planned release "Feedback" (only eventually released in ).

After this, the band disbanded with Steve Hackett returning to solo releases including "Guitar Noir". Steve Howe tried to reform the group with as a guitarist and lead vocals. The bootleg of the second album sessions called 'Nerotrend' (later released as a bootleg) features half the music sung by Berry and half sung by Bacon. Various bits of this release have appeared on future albums, including the song 'This World is Big Enough for All of Us' which became 'Birthright' on the ABWH album. [ [http://www.tranglos.com/marek/yes/tr_125.html Tentative Review by The Christopher Currie: GTR - GTR ] ]

An interesting piece of GTR trivia concerns vocalist Max Bacon's almost surreal attempt to relaunch his career following the breakup with an appearance as a contestant on 's vintage talent show "". Relaunched in the late , the revamped "New Faces" was hosted by and featured judges such as (the nice one) and (the nasty one). Max eventually reached the final and performed a version of "The Hunter", but he ultimately lost the competition. Interestingly, however, no mention was made on the show of his previous GTR success. Max also performed a number he had previously recorded with , again without the show mentioning his earlier career.

Max Bacon's solo album "The Higher They Climb" included GTR material. He later sang lead on "Going, Going, Gone" on Steve Howe's 1999 release, "Portraits of ". There is also a CD of the LA GTR performance on at the Wiltshire Theatre.