The Nikon D3 is a 12.1 megapixel professional grade full frame (35 mm) digital single lens reflex camera (DSLR) announced by the Nikon Corporation on 23 August 2007 along with the Nikon D300 DX format camera. The D3, along with the Nikon D3X, was a flagship model in Nikon's line of DSLRs, superseding the D2Hs and D2Xs. The D3, D3X, D3S and D700 are the only Nikon DSLRs manufactured in Japan. It was replaced by the D3s as Nikon's high speed flagship DSLR. 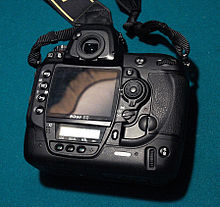 The D3 features a full frame 35 mm equivalent CMOS image sensor measuring 23.9 mm × 36.0 mm.[1] This sensor is larger than the DX format sensors of all previous Nikon DSLRs, and Nikon has coined the term "FX format" to describe it. The D3's sensor has larger pixels and greater light sensitivity than previous DX sensors. This allows the camera to reach higher equivalent film speeds and produce images with less noise in low light situations. Low light situations include times when the camera is operated at high shutter speed or high f number, where the lens' aperture is reduced to improve depth of field and sharpness. The sensor captures image data at 14 bits per color channel through 12-channel parallel readout, which ensures 9 frame/s continuous shooting with higher bit depth than that on previous 12-bit sensors.

Processed with the new Nikon EXPEED engine, the Live View mode in D3, along with D300, was Nikon's first implementation in its DSLR line-up. D3 also utilizes a stepper motor in aperture coupling mechanism for the first time,[2] allowing real time depth of field control in Live View with exposure preview and live histogram functions. Additionally, D3 provides a lossless algorithm applied to RAW file along with uncompressed and lossy-compressed format.

The camera grip and body style were designed by Giorgetto Giugiaro's Italdesign.[3][4]The camera body uses the Nikon F mount, making it compatible with older Nikon lenses. Other features include 9 frames per second in FX and 11 frames in DX and a large and bright LCD screen.

Three firmware updates have been released for the D3. The latest firmware version is 2.02.[5] In this firmware version, the maximum ISO sensitivity allowed under Automatic ISO can be modified in increments the same as the manual ISO settings can, and automatic White balance and focus tracking are improved. In the 2.01 firmware update, automatic correction of lateral chromatic aberration is standardized, and Vignetting ("Vignette control"), lens distortion ("Distortion") correction, as well as image rotation ("Straighten") via playback ("Retouch") menu, are made possible.

The D3 is Nikon's first full frame DSLR. Full frame can either offer greater resolution or larger pixels for improved sensitivity; in the D3 Nikon opted for a lower resolution, higher sensitivity solution. For additional resolution, the D3x was introduced. Full frame sensors also maintain the traditional focal lengths and depth of field associated with 35mm camera systems. Because it is Nikon's first such camera it does not succeed or replace another camera model. Other professional grade Nikon models included the D2Xs and D2Hs.

The camera has a vertical grip in addition to the standard horizontal grip.

When Nikon announced the D3, it was priced at US$4999, but present prices are much lower.[6] In July 2008 the D3x's larger buffer memory was offered as an upgrade to D3 owners, doubling its continuous shooting capacity. This modification represents approximately 10% of the original cost of the camera. New D3 bodies still ship with the original buffer memory; upgraded models can be identified with a "2x" label in the storage card door.

Popular Photography magazine tested the camera.[14] The website details the results of the tests, noting that the camera has excellent control of noise, and can shoot in very low light at high ISO speeds and produce very usable results.[14] Dxomark's Sensor ranking places the D3 at fourth place behind two medium-format cameras and the D3X.[15]