Freeways in Taiwan are officially coded "National Highways" with their respective numbers. By this principle, Freeway No. 3 is coded National Highway No. 3 (國道三號) in official documents or on road signs. Besides the numeric name, on 1 November 2004 it was named the Formosa Freeway (福爾摩沙高速公路) in a naming competition; however, its old alias Second Freeway (第二高速公路 or 北二高) is more popular among the road users.

The original plan was only intended to build a second freeway between Taipei and Hsinchu. The construction began in 1987. Tucheng IC - Sanying IC was opened in January 1993, followed by Zhonghe IC to Hsinchu SIC in August 1993. Extension from Hsinchu SIC to Xiangshan IC was finished in February 1996. In March of 1996, Xizhi SIC - Muzha IC was opened. The final phrase of the north section was Muzha IC. - Zhonghe IC, which was completed in August, 1997. The extension between Xizhi SIC and Jijin IC completed in August 2000.

On April 25, 2010, a landslide occurred on a segment of Highway 3 near Xizhi, large amount of dirt buried both directions of the freeway. Four cars were buried under the debris, killing four people.[1] Bad hillside anchoring was blamed as a possible cause, as it had not been raining at the time of the collapse, and an earthquake was not registered.

Repairs to the freeway were completed on June 19, 2010 and normal traffic flow restored[2].

Major cities that have exit along the route 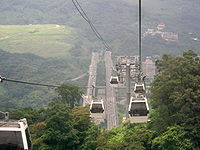 Intersections with other freeways and expressways

The lanes in each direction are listed below.

Taipei City - National Highway No. 3A