Gaelic handball (known in Ireland simply as handball;[1][2][3][4] Irish: liathróid láimhe) is a sport similar to Basque pelota, racquetball, squash and American handball (an almost identical game). It is one of the four Gaelic games organised by the Gaelic Athletic Association (GAA).[5] The game may be played with two (singles) or four players (doubles) and the players hit the ball with a hand or fist against a wall in such a way as to make a shot the opposition cannot return.[6] In 2009, Irish Handball was rebranded as GAA Handball. 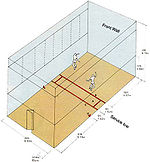 A smaller alley was also introduced, measuring 12.2 m by 6.1 m (40 feet by 20 feet) with a front wall 6.1 m (20 ft) high. The first alley of this size was built in Ireland in 1969. This smaller size is now the standard in the international version of the game, but both alleys are still used in the Gaelic game, with two separate championships ran by the GAA in the two codes.[7]

The objective of a game is to score a set total of points before your opponent does. Points are only scored by the person serving the ball. In other words, if a player wins a rally but did not serve at the start of that rally they only win the right to serve, and thus the chance to score after a subsequent rally. The serving player has two opportunities to hit the ball, from the "service area" (between the two parallel lines), off the "front wall" and across the "short line" (which is located exactly half-way down the court from the front wall).

Players take turns at hitting the ball off the "front wall" before the ball bounces twice following their opponent's previous shot. Most handball games take place in a four-walled court but there are also three-walled and one-wall versions of the game.

Handball-like games have originated in several places at different times. Hieroglyphs in the temple of Osiris in Egypt portray priests taking part in a game very similar to handball. Mesoamerican civilizations in South and Central America had a form of handball-like game, which was a large part of pre-Columbian culture.

The first recorded game of striking a ball with a hand against a wall was in Scotland in 1427, when it was recorded that King James I ordered a cellar window in his palace courtyard blocked up, as it was interfering with his game.[8] In Ireland, the earliest written record of a similar ball game is contained in the town statutes of Galway in 1527, which forbade the playing of ball games [generic] against the walls of the town. The first depiction of an Irish form of handball does not appear till 1785.[9] On the west coast of Ireland, Galway had many trading links with Spain, especially the Basque regions, where the similar game of pelota is played.

The rules are simple. All you have to do is hit the ball with or without fulls (depends on location).

Both Scottish and Irish immigrants brought the game to many countries in the 18th, 19th and 20th centuries. It is still played in the United States, Canada, Mexico, Australia, New Zealand, South Africa, Wales, Africa and England.[10]

In Ireland, there are four main types of handball. There is 40x20 (small court), the traditional 60x30 Softball & Hardball (big alley) and One-wall handball. One-wall handball has gotten very popular over the past 3 years and it is the most popular version of international handball. It is played in over 35 countries and it is hoped that it will become an Olympic sport soon.