The Deep End of the Ocean (film)

The Deep End of the Ocean (film)

Infobox Film
name = The Deep End of the Ocean 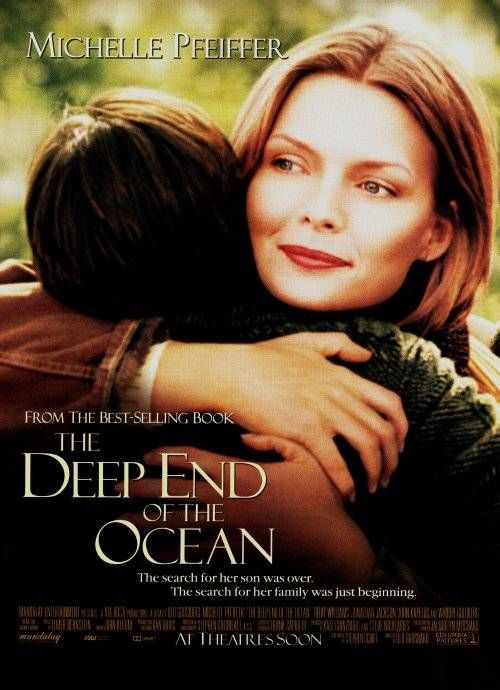 "The Deep End of the Ocean" is a 1999 film adaption of the book written by , which stars and with , Jonathan Jackson and in his first feature film role. The plot tells a story about a Midwestern family as they deal with the disappearance of their young son.

Beth Cappadora is like most mothers--loving, devoted and occasionally overwhelmed by the demands of caring for her family and maintaining a successful career as a photographer. With her three children in tow (two young sons and a baby daughter) Ben, Vincent, and Kerry, she arrives at a hotel for her 15th high school reunion weekend in the year 1988. In the middle of the crowded lobby, she leaves the boys unattended for no more than a minute--and in that moment her three-year-old son Ben disappears. A frantic search turns up nothing; he has vanished in the blink of an eye, seemingly without a trace. As hours turn into days, days into months and months to a decade, Ben's disappearance has a devastating effect on Beth's ability to cope, creating tensions between her and her husband Pat as they start playing the destructive blame game as well as her son, Vincent, who turns to crime. Time goes by, and with Pat's help, Beth and the children go back to leading a seemingly normal life. Then one day, nine years later (1997), a boy named Sam knocks on the Cappadoras' door, a boy who is the same age that their missing son would be and looks like the artist's prediction of what Ben would look like at that age. He asks to mow her lawn and after a while, Beth realizes that Ben looks familiar. After further investigation, she finds out that Ben is her long-lost son, stolen when he was three by a mentally unstable woman.