The Hundreds of Cheshire, as with other Hundreds in England were the geographic divisions of Cheshire for administrative, military and judicial purposes. They were introduced in Cheshire some time before the Norman conquest. Later on, both the number and names of the hundreds changed by processes of land being lost from Cheshire, and merging or amalgamation of remaining hundreds.

The hundreds at the time of the Domesday Survey 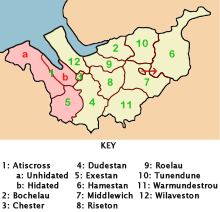 The Domesday Hundreds of Cheshire in 1086. Two hundreds later forming part of Wales are shown in pink.

Cheshire, in the Domesday Book was recorded as a larger county than it is today. There is a small disagreement in published sources about where the northern boundary of Cheshire lay, and some parts of the border areas with Wales were disputed with the predecessors of Wales. One source states that the northern border was the River Ribble, resulting in large parts of what was to become Lancashire being at that time part of Cheshire.[1] This area is included as "Inter Ripam et Mersam" in the Domesday Book.[1][2] However, more recent sources confirm that the actual boundary at that time was the River Mersey.[3][4][5]

This uncertain nature of the northern border lasted until 1182, when the land north of the Mersey became administered as part of the new county of Lancashire.[8] Later, the hundreds of Atiscross and Exestan became firmly part of Wales, as did part of the Dudestan hundred.

Emergence of the later hundreds 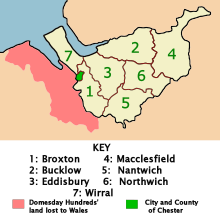 The Later Hundreds of Cheshire around 1850.

Over the years the remaining ten hundreds consolidated to just seven with changed names: Broxton, Bucklow, Eddisbury, Macclesfield, Nantwich, Northwich and Wirral. The date at which this process happened is not clear: These newer names are reported to be all in use by 1259 to 1260.[9] The same source reports research that has found Macclesfield Hundred to be named in 1242 and Eddisbury Hundred by the late 12th century.[9] Chester lost its hundred status, but was subsequently given the status of "county of itself" and was known as the City and County of Chester.

This hundred was formed from the old Dudestan hundred. The southern part of Dudestan was, transferred to Wales where it was known as Maelor Saesneg, and (later still) "Flintshire Detached" (see Ancient county of Flintshire.)[6]

Bucklow was known to have been in existence at least as early as 1260. It was formed from the earlier Domesday hundreds of Bochelau and Tunendune.[9][10]

Macclesfield was known to have been in existence at least as early as 1242. It was formed to a great extent from the earlier Domesday hundred of Hamestan.[9][10]

Wirral was formed from the earlier Domesday hundred of Wilaveston.