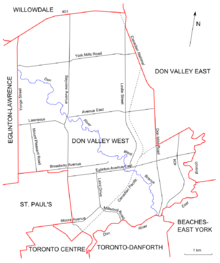 Don Valley West is a federal electoral district in Ontario, Canada, that has been represented in the Canadian House of Commons since 1979. Its population in 2001 was 115,539.

A by-election had been scheduled for September 22, 2008, following the resignation of John Godfrey, but was cancelled by the issuance of writs for the 2008 federal election.

Its most high-profile MP has been John Bosley, who was Speaker of the House 1984-86.

The riding has the highest proportion of Muslims in Canada.

The district includes the neighbourhoods of York Mills, Silver Hills, the western half of Don Mills, the eastern half of Lawrence Park, Leaside, Thorncliffe Park and Flemingdon Park in the City of Toronto. The area is 37 km².

John Godfrey, who had represented the riding since 1993, announced in November 2007 that he would be resigning his seat on July 1, 2008 in order to accept a position as headmaster of Toronto French School and would leave earlier if an election were called before that date. Godfrey subsequently postponed his resignation until August 1.[1]

On August 17, 2008, the Prime Minister's Office issued a press release on behalf of Prime Minister Stephen Harper announcing a by-election for Don Valley West on September 22, 2008.[2] The by-election was canceled with the announcement of the federal election to held on October 14, 2008.

The federal electoral district was created in 1976 from Don Valley riding.

Note: Canadian Alliance vote is compared to the Reform vote in 1997 election.