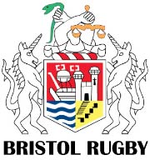 Bristol Rugby is a rugby club in , .

The club is a club in England and relies in large part on the many junior rugby clubs in the region, particularly those from "the Combination" (the ). Significant players it has produced have include Tom Richards, who played for both the British Isles and Australia, Sam Tucker, John Blake, John Pullin and Alan Morley. In the professional era several international stars have played for Bristol, including Argentina's and , and Jason Little, double World Cup winner with Australia. , until 2007 the most-capped player ever for Wales, joined Bristol in the 2005-6 season.

Bristol Football Club was formed in 1888 when the Carlton club merged with rival club Redland Park to create a united Bristol team. Westbury Park having refused to merge then folded and many of its players subsequently joined Bristol. The County Cricket Ground at Nevil Road was leased for home matches.

The first match was a heavy away defeat to Cardiff and although the first season was relatively successful the second was not with only three games won. The club went from strength to strength over the next few years under the captaincy of W. Tommy Thomson. It turned the corner and in 1891 - 92, now wearing the more familiar navy and white hooped shirts, the Bristol team won twenty games out of twenty four.

Over the ensuing seasons the fixture list went from strength to strength, consisting of most of the top English and Welsh sides. In 1900 became Bristol's first England cap. Two major touring sides played Bristol during this period. The first New Zealand defeated the club 41 - 0 in 1905 and in 1909 a combined Bristol and Clifton team, captained by , lost to Australia 11 - 3.

The club was beginning to bring on a new generation of players when the First World War halted all rugby. After the war a Bristol United side was formed to provide rugby for returning servicemen and this led to the rebirth of Bristol in 1919. The County Ground was no longer available for home games so the club rented a field at Radnor Road, Horfield although occasional matches were staged at the and grounds. The Radnor Road seasons were good ones for the club and a new crop of stars appeared.

The stadium was built on an area of land called Buffalo Bill's Field which was previously occupied by allotments in 1921. Bristol defeated Cardiff 19 - 3 in the opening match in front of a large crowd.

The fiftieth anniversary was celebrated in 1938 but the next few years saw a fall in performances and the final inter-war season was a poor one. During World War Two a Bristol Supporters team kept going in the city. Thus Bristol had readily available players when peacetime rugby union resumed in 1945.

The playing record in the early fifties was mixed, but there was a huge improvement under the captaincy of first Bert MacDonald, and then Dick Hawkes. Records were broken in 1956 - 57 and even better was to follow in what has been called 'The Blake Era'.

Fly half John Blake became captain in 1957 and under his leadership the club developed an entertaining running style of rugby involving backs and forwards, which was years ahead of its time. The Bristol club set and broke new records for wins in a season and points scored and goal kicking forward Gordon Cripps rewrote the individual points scoring records. The 75th anniversary was celebrated in 1962-63 and floodlights were installed in the following season. Club form peaked in 1965-66 under Derek Neate's captaincy when 39 games were won, and again in 1971 - 72 under Tony Nicholls. This was the club's best ever season with a thousand points being scored for the first time and the team being crowned unofficial English and Anglo-Welsh champions.

Under Mike Rafter's captaincy, the club won the John Player Cup in 1983, defeating Leicester 28-22. During this period Alan Morley established a world record of 479 tries in senior rugby. The centenary season with Nigel Pomphrey as captain was celebrated in style with a game against the Barbarians and a narrow defeat in the cup final, but thereafter there was a gradual decline in playing standards. The team did not really adapt well to the demands of league rugby and the club's administrators struggled to cope with the professional set up.

Relegation to Premiership Two in 1998 was not the worst of Bristol's problems. Only an eleventh hour rescue by Malcolm Pearce saved the club from potential oblivion. Bristol also lost control of the Memorial Stadium Company to Bristol Rovers and have been tenants ever since. Bristol's first season outside the top flight brought with it a number of first-time visits to clubs. Bristol went on to win the Championship and promotion back to Premiership One, sealing the win with a 22-11 victory over Worcester. The World Cup disrupted the early part of the season, with Henry Honiball (South Africa), and Eduardo Simone (Argentina), Garath Archer (England), Jamie Mayer (Scotland), (Canada) and Pablo Lemoine (Uruguay) all missing the first few games. Under the captaincy of Dean Ryan the team played some of the most entertaining rugby seen at the Memorial Stadium. There were thrilling victories over Saracens, a late winner away at Northampton and a breath taking 31-31 draw with Bath. The team eventually finished sixth, just missing out on European Cup qualification.

During the close season, Dean Ryan took over as Head Coach from Bob Dwyer, and new signings included, Ben Sturnham from Bath, Leigh Davies from Cardiff and Neil McCarthy from Gloucester. After an opening day victory over newly promoted Rotherham, Bristol had a disappointing 2000/01 season finishing ninth. The team lost their first three Premiership games before turning their season around with a run of ten home matches without defeat, including wins over champions Leicester Tigers, and West Country rivals Bath. The turning point coincided with the arrival of Argentine international fly-half, who started to forge an unstoppable half-back partnership with countryman . Off the field, became Managing Director, successful community initiatives saw the attendance figures rise.

The 2001/02 season brought a new name, Bristol Shoguns, thanks to the record breaking five-year £2 million sponsorship deal with motoring giants Motors. The team also saw the arrival of some of the game's most promising young talent, as well experienced internationals Julian White and double world cup winning centre, Jason Little. Despite a mixed start, supporters at the Memorial Stadium witnessed some breathtaking rugby during the second half of the season. With the Shoguns finishing the season with the most bonus points in the Zurich Premiership, three players in the top try scorers chart, a place at Twickenham in the final of the Zurich Championship, and also a place in the for the 2002/03 season.

One of the key turning points of the season was the arrival of former selector Peter Thorburn. The ex-North Harbour coach joined in late February for the remainder of the season. His fresh input coupled with the experience of Dean Ryan and his coaching team helped bring out the best in the Shoguns. In the remaining fixtures the Shoguns started to open up defences and put the points on the board, including 47 against , 40 against Gloucester and 38 against recently crowned champions . The great run of results led to the Shoguns securing a top eight finish and a place in the quarter-final of the Zurich Championship at Welford Road with qualification for the lucrative up for grabs. The Shoguns didn't disappoint in the Zurich Championship when they demolished the Tigers 27-13 in the quarter-final and then 32-24 in the semi-final. The 2002-03 season was greeted with huge excitement by the Bristol faithful. Several months later, the club would be staring at oblivion. The cracks started to appear in the close season. Head Coach moved to Gloucester, resigned as Director of Rugby whilst skipper Jason Little retired. Peter Thorburn took over as coach and claimed that the team were several weeks behind in their preseason preparations. The team lost their opening four Zurich Premiership fixtures. An amazing 14 man win over Leicester was followed by a first foray into the and a superb, televised win over Montferrand was the highlight. League form was mixed but there were more wins than defeats including a momentous first league win away at Bath. But Christmas saw a bombshell, owner Malcolm Pearce announced that he would quit at the end of the season. Worse was to follow as it became clear that the club's existence was under threat as first, rumours began to circulate that Bristol could be sold to Firoz Kassam and play out of . Then, to the horror of Bristolians, it became apparent that a merger with bitter rivals Bath had been mooted. Although neither event came to pass, Bristol were relegated at the end of the season as off field distractions took their toll.

In 2003 with Bristol at rock bottom and a week later Richard Hill joined as first team coach and head coach respectively. While the board were raising money to stabilise the club Haag and Hill implemented a '3 year plan' to rebuild Bristol and put them back in the Premiership. He succeeded and within two years they were promoted back to the in 2005 after winning National League One in style.

The club's deal with Mitsubishi expired on , , and the club is once again known as Bristol Rugby Football Club.

Many pundits had tipped Bristol as relegation certainties in 2005-6, but they defied the critics with some strong performances. A surprise home victory to local rivals Bath was followed by a win away at Newcastle but these September wins were followed by a fallow period in the Guinness Premiership until the visits from and in November. Leicester Tigers were also surprise losers at the in December, and Bristol morale got a lift when they secured a draw against high-flying London Wasps in February. The season was capped by away victories over and and a decisive home win against in April. Some individual players stood out: winger surprised many defences with his speed and agility, proved tough to beat at centre, fly-half had an impressive goal-kicking record and scrum-half had been called up to captain by the season's end on the strength of play at Bristol. Among the forwards and imposed themselves on the opposition.

At the end of the 2005-06 season, Shaun Perry was called into the England squad for the two-test series against Australia. However a late-diagnosed fractured wrist, sustained against Newcastle, ruled him out for 8 weeks and the consequent tour.

He has since been named in the 2006-07 Elite Playing Squad, the first Bristol player to appear in the squad since its creation. He was shortly followed into the squad by team mate Dan Ward Smith, who missed out on the 2007 Six Nations (a tournament in which it was widely expected that he would wearing the number 8. jersey for England), after dislocating his kneecap in a Guinness Premiership game against Northampton.

Bristol elected to play two 2006-07 games at , home of side . The local derby against Bath and the game against Premiership giants Leicester were moved from the 11,750 capacity Memorial Stadium to Ashton Gate's 21,500 capacity to allow more fans the chance to watch the team. The precedent for this was established for a crucial relegation fixture against Bath in May 2003. was also the venue for Bristol's end of season derby clash with Gloucester, whose ground, , is undergoing redevelopment.