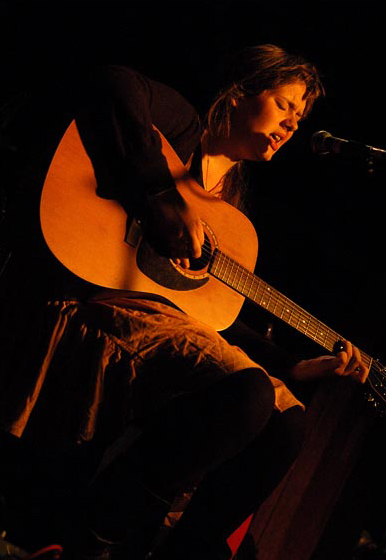 Adele Laurie Blue Adkins (born 5 May 1988 in , ), [ [http://www.findmypast.com England and Wales Births 1984-2005] ] known professionally as Adele, is an English-Welsh [Confirmed by herself during a broadcast of on 2 October 2008] singer. Adele has described her musical style as "heartbroken soul".

Adele's first public singing performance was in a school presentation where she sang "Rise" by Gabrielle. To make her look like the singer, her mother made an with sequins, which she said was embarrassing. Adele then claimed she was influenced from the music of and in her teens by accident, as she stumbled on the artists' CDs in HMV in the Classics section while looking for a new hair style. She only got to listen to those songs for the first time as she was clearing her bedroom. She graduated from The for performing arts & technology in Croydon in May 2006, which was the same performing arts school attended by , , and .

Adele's first record, "", in which she sings the praises of Tottenham, was released on 22 October 2007 as a limited edition 7" vinyl on Jamie T's label Pacemaker Recordings, with B side "Best For Last". "Hometown Glory" was featured as the single of the week on iTunes. Since launching her page on Christmas Eve 2004, Adele became popular on the site which she used as a media focus and test point for songs. She then signed to independent music label . In January 2008 released her second single "", hitting #2 for 4 weeks in the UK Chart and still in the 14 weeks after release. [cite news| title=This Week's Releases: 21 January 2008| publication=NME.com| url=http://www.nme.com/news/lightspeed-champion/33736| date=21 January 2008]

On 28 January 2008 her debut album "19", was released in the . The album went straight to #1 in the UK charts and was certified platinum within a month of its release.

On 13 April 2008, Hometown Glory re-entered the at number 38 after featuring in an episode of the E4 show Skins.

On 11 May Adele performed a selection of songs from 19 at in Mote Park, Maidstone, Kent. She sang Cold Shoulder, Melt My Heart To Stone, Right As Rain, Hometown Glory, Tired and Chasing Pavements.

On the 20 June the album was released in the .. By mid September the single charted at the number 60 position and was rising rapidly. [ [http://www.musicweek.com/story.asp?sectioncode=1&storycode=1035465&c=1 Battle of the not-so-young ones at the top of the US charts Music Week] ]

The album was written about a former boyfriend. The song refers to an incident that occurred at 6AM one day after a fight with that person during which Adele was running down the street alone. She thought to herself "What you're chasing is you're chasing an empty pavement." Adele finds it hard to sing "Melt My Heart To Stone" because it was written right after her breakup with the former boyfriend. Adele is alleged to have said that "The Daydreamer" was about herself daydreaming about her having the relationship the former boyfriend was allegedly having with another boy.,

Adele plans to write her next album in because it would give her the inspiration she is lacking at home where she is comfortable.

In October 2008 along with and will be guest singers for the award-winning pianist and composer at the event. [ [http://www.virtualfestivals.com/latest/news/5285/-/Razorlight--Bacharach-top-Electric-Proms Razorlight & Bacharach top Electric Proms Virtual Festivals 17 September, 2008] ] On the 18th of that month Adele will be the musical guest on [ [http://blogs.orlandosentinel.com/entertainment_tv_tvblog/2008/09/josh-brolin-jon.html Josh Brolin, Jon Hamm to host "Saturday Night Live"; Coldplay to be musical guest Orlando Sentenel 29 September, 2008] ]

On 10 December 2007, Adele was awarded with the first Brit Awards Critics' Choice Award

She also received praises from Paul Rees, editor of Q magazine, who said it was "refreshing to hear something different" after a thousand years of "identikit bands who want to sound like ".Fact|date=July 2008

Adele cherishes the praise she has received from and .

Adele's success is occurring simultaneously with several other British female soul singers. The British press has dubbed her a new . Also she has been linked to a third British Musical Invasion of the United States. Adele commented that while this phenomena is unexpected she is "proud to be a part of it. I'm very pleased to be riding the wave".

In September 2008, Adele released her version of "Many Shades Of Black" by on to her MySpace page.

The fifth song to be released from 19 is , a cover.

In September 2008, Adele was featured on 's Tour. As well as singing some of her own songs, she did a cover of 's Black & Gold which she said was her "favourite song of the year."

Adele lives with her mother in North London. She admitted that she was planning to buy a flat after receiving her record company advance, but spent it all on Burberry Clothes before "Chasing Pavements" was even released.

Adele is a self described "big drinker" who drinks to stave off boredom. She is worried because she can envisage herself at some future time becoming like . Adele does not use drugs, nor has she ever done so.

In August 2008 Adele reported she has a boyfriend. She also noted that "I can't wait to be a mum". She said she is fearful that her personal life may hurt her future music plans. [ [http://www.digitalspy.co.uk/showbiz/a121685/adele-hints-shes-found-mr-right.html Adele hints she's found Mr. Right Digital Spy 12 August 2008] ]