The Republic of Guinea Armed Forces (French: Forces armées guinéennes) are the armed forces of Guinea. They are responsible for the territorial security of Guinea's border and the defence of the country against external attack and aggression.

Guinea's armed forces are divided into five branches — army, navy, air force, the paramilitary National Gendarmerie and the Republican Guard — whose chiefs report to the Chairman of the Joint Chiefs of Staff, who is subordinate to the Minister of Defense. In addition, regime security forces include the National Police Force (Sûreté National). The Gendarmerie, responsible for internal security, has a strength of several thousand.

Upon independence in 1958, France cut all ties and immediately began to repatriate Guinean soldiers serving in the French Army.[3] Of the about 22,000 Guinean soldiers in French service, about 10,000 decided to remain with France. The other 12,000 were demobilised and returned to Guinea. The new armed forces were formed by incorporating some of the former French soldiers, after a careful screening process to determine political reliability, with members of the former territorial Gendarmie to form the People's Army of Guinea (L'Armee Populaire de Guinee). By the end of January 1959 the new army had reached a strength of around 2,000 officers and soldiers.

In February 1969, the Guinean government moved against the armed forces after alleging that a plot centred in Labé, the centre of the Fula (French: Peul; Fula: Fulɓe) homeland was planning to assassinate Toure and seize power, or, failing that, force the secession of Middle Guinea.[4] This followed military dissatisfaction over the creation of a PDG control element in each army unit. Later the alleged Fula connection was dropped, the accusations widened to other groups, and over 1,000 Guineans arrested. After the plot, the army was regarded by the government as a centre of potential subversion, and the militia was developed as a counterforce to any military threat to the government.

The army resisted the Portuguese invasion of Guinea in November 1970. Purges that followed the 1970 invasion decimated the upper ranks of the army, with eight officers sentenced to death and 900 officers and men who had reached a certain age retired from active duty.[5] General Noumandian Keita, chief of the Combined Arms General Staff, was convicted and replaced by the army's chief of staff, Namory Kieta, who was promoted to general.

In March 1971 elements of the military were deployed to Freetown in Sierra Leone after the Sierra Leonean President, Stevens, appeared to start losing his control of the military.[6] Stevens visited Conakry on March 19, 1971, and soon afterwards, around 200 Guinean soldiers were despatched to Freetown. Two Guinean MiGs made a low flyover of Freetown and Toure placed the Guinean military on alert 'because of the serious troubles affecting the fraternal peoples of Sierra Leone.' The force, also reported as numbering 300, protected Stevens, though it was shortly reduced to 100 and then to fifty, plus a helicopter. The last Guinean troops were withdrawn in 1974.[7]

In early 1975 the Guinean military consisted of an army of around 5,000, an air force of 300, and a naval component of around 200. The army comprised four infantry battalions, one armoured battalion, and one engineer battalion.[8] In the early 1970s the armed forces were organised into four military zones, corresponding to the four geographical regions (Lower Guinea, Middle Guinea, Upper Guinea, and Forest Guinea). One of the four infantry battalions was assigned to each of the military zones. The zone headquarters also doubled as battalion headquarters, and acted as a supervisory element for elements of company and platoon size assigned to each of the country's twenty-nine administrative regions.[9] Thus the only concentration of troops in Conakry appeared to be the armoured battalion, with a modest number of Soviet medium tanks manufactured in the late 1940s, as well as Soviet APCs, and elements of the engineer battalion. The armed forces, though formally responsible for defending the country's territorial integrity, were really during that period focused upon national development tasks, including agricultural, industrial, and construction tasks. The engineer battalion had companies in Conakry, Kankan, and Boké, and was engaged in constructing and repairing buildings and roads.

Increasing mistrust of the regular armed forces after the Labé plot led to the militia assuming greater importance.[10] The militia had grown out of a 1961 Democratic Party of Guinea (PDG) decision to create workplace ‘committees for the defence of the revolution.’ These committees were encouraged by party officials to report dishonest practices such as theft and embezzlement of funds which might ‘endanger the achievements of the revolution.’ The PDG youth arm, the Youth of the African Democratic Revolution (JRDA) was especially exhorted to report irregularities and crime to party or police authorities. Units of volunteers, formed in response to this call, assumed limited policing functions. Following government praise for these units’ efforts, the militia's role expanded, especially as black-market activity and smuggling grew worse. The force was formalized as the Popular Militia (Milices Populaires) in the early 1960s, given distinctive uniforms, and linked to the developing civic service, which was engaged on national development tasks. After 1966 it was consciously modeled after the Chinese Red Guards.

In 1969, the militia was officially granted a role equivalent to the army, as a counterbalance in any military coup d'état. The elements in the Conakry area were issued small arms and given military training. Touré had heralded this policy in 1967 when he wrote: ‘thanks to their special political, physical, and social training, the people's militia will become the indisputable mainspring of our security system, of which the conventional armed forces constitute [but] a fundamental section.’[11] The militia was re-titled the National and Popular Militia in 1974 and its regular section scaled down, as the President announced that the country could not afford the large standing force that he believed was necessary to deter what he saw as the constant threat of invasion.[12] Thus the militia was re-organised in multiple tiers, with a staff in Conakry, some combat units, and the remainder of the permanent element serving as a cadre for reserve militia units in villages, industrial sites, and schools. The permanent cadre was to circulate among the villages, spending three months in each one, to train the local militia. President Touré announced that the ultimate goal was to have a 100-strong paramilitary unit in each of the country's 4,000 villages. Infantry weapons of Soviet manufacture imported from the USSR, Czechoslovakia and the PRC were to be issued as they became available.

With much focus on the militia, Touré kept much of the armed forces in poverty. The International Crisis Group said that '..conditions of service were deplorable, even for officers. The senior officer corps lived on meagre rations and saw its privileges and family allowances curtailed over time. Soldiers of all ranks had to find ways to supplement their rations and were often reduced to working either on state farms or in small agricultural projects.'[13] '...All regular military activity, for example exercises, was considered potentially subversive.'[14] 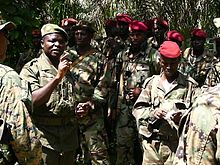 A Guinean soldier translates for other soldiers during a joint U.S.-Guinean exercise, 2005

On 3 April 1984, following Toure's death, Lansana Conté, assistant chief of staff of the army, led a military coup which toppled the interim head of government. A military junta, the Comité Militaire de Redressement Nationale, was installed, which started to feud within itself, and quickly, as had occurred under the Touré regime, the paramount national security concern became the preservation of the president's power.[15] Conté had to suppress his first revolt in July 1985, by his immediate deputy, Colonel Diarra Traoré.[16]

Regional conflicts in the 1990s and 2000-2001 attacks along the southern border by rebels acting as proxies for Liberia's Charles Taylor had important effects on the security forces.[17] The Conté government was deeply involved in the First Liberian Civil War as it supported ULIMO, the major grouping opposing Taylor in Liberia. Yet on the other side of the border the Guinean government also contributed troops to the ill-fated ECOWAS peacekeeping force ECOMOG in Liberia. After ECOMOG departed in 1997-98, the Guinean government began supporting the new Liberian rebel movement LURD. Attacks by Taylor-backed rebels in 2000-01 were partially an attempt to stop this support.

More serious was a 1996 attempted coup that originated as a military mutiny caused by the armed forces’ poor living conditions. Conté, ‘civilianised’ since a rigged election in 1993, had to make significant concessions in order to save his regime. Conté appointed his first civilian Minister of Defense in 1997.[18]

The military suffered serious unrest in 2008. Among measures taken by Conte to try and shore up his support within the military after 2007 was the transfer of the 'popular Sékouba Konaté to Conakry to head the parachute Autonomous Battalion of Airborne Troops (French acronym BATA) in an attempt to calm the troops.'[20] However, these and other measures failed to stop the 2008 Guinean coup d'état led by Moussa Dadis Camara in late December 2008.

The International Crisis Group said in September 2010 that from 2001 to 2009 the size of the armed forces has risen dramatically from 10,000 in 2001 to a reported 45,000 in 2010 (though the latter figure needs to be treated with great caution.)[1] 'This rapid growth has resulted from both formal and informal recruitment. Erratic mass promotions have created an inverted structure, with more officers than simple soldiers, eroding professionalism and straining the defence budget. Indiscipline, criminality and impunity are rife, while working and living conditions for rank-and-file soldiers are deplorable.'[21]

The 15,000-member army is the largest of the four services. There are four military régions - the 1st RM: Kindia; 2nd RM: Labé; 3rd RM: Kankan; 4ème RM: Nzérékoré, plus the Conakry special zone.[22]

The navy has about 900 personnel and operates several small patrol craft and barges.

After achieving independence from France in 1958, the Force Aerienne de Guinea was formed with Soviet assistance in the delivery of 10 MiG-17F fighters and two MiG-15UTI trainers. In the same era an An-2, An-12, An-14, Il-14 and Il-18V transports were delivered, Mil Mi-4 helicopters also entered service. Other eastern bloc countries deliveries included three Aero L-29 jet trainers, six Yak-11s and Romania contributed licenced built IAR-316 Alouette III and two IAR-330L Puma transport helicopters. Further Soviet aid was requested when Conakry Airport was opened for use by Soviet Naval Aviation maritime reconnaissance aircrat.[23] This resulted in the delivery of eight MiG-21PFMs and a MiG-21U in 1986 to replace the remaining MiG-17s.