Canterbury Regional Council is the regional council for Canterbury, the largest region in the South Island of New Zealand. It is part of New Zealand's structure of local government. It uses the promotional name Environment Canterbury, frequently abbreviated to 'ECan'.[2] 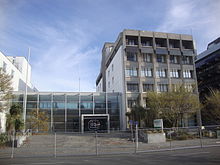 The main office of ECan in Kilmore Street, Christchurch; to be demolished due to earthquake damage

Its main office is in Christchurch with smaller offices in Timaru and Kaikoura. The area of its jurisdiction consists of all the river catchments on the east coast of the South Island from the Clarence River, north of Kaikoura, to the Waitaki River, in South Canterbury.[3] The region includes the Canterbury Plains, north and south Canterbury, the major braided rivers of the South Island, (the Waimakariri River, the Rakaia River and the Rangitata River) the Mackenzie Basin and the Waitaki River.

Canterbury Regional Council was governed by 14 elected councillors who were elected on a first-past-the-post basis from eight regional constituencies.[5]

On 24 September 2009, Alec Neill became Chairman after the previous Chairman, Sir Kerry Burke, lost a motion of no confidence adopted 8 votes for to 6 against from the other councillors. Burke remained a regional councillor[6]

In the October 2007 local government elections, four new regional councillors were elected on platforms promoting better management of water resources and opposition to the Central Plains Water scheme.[8] The four were: David Sutherland and Rik Tindall, who stood as "Save Our Water"[9] candidates, and independent candidates Jane Demeter[10] and Eugenie Sage.

In March 2010, the Government sacked the ECan councillors[13] and replaced them with commissioners[14]:

The commissioners held their first public meeting on 6 May 2010.[15]

Dr. Bryan Jenkins has been the chief executive since June 2003.[16] Dr Jenkin's contract was for a term of five years. Canterbury Regional Council was required by the Local Government Act 2002 to have a contestable process with external applicants in order for Dr Jenkins to apply for another five year term.[17] On 17 March 2008, Sir Kerry Burke released a media statement that Dr Jenkins had been reappointed for a further term of five years.[18]

The Natural Resources Regional Plan (PNRRP) proceeded in two stages. Chapters 1 to 3 (Overview, Ngai Tahu and Air Quality) were publicly notified in June 2002. Chapters 4-8 were publicly notified in July 2004. Chapters 1 to 3 were decided on in September 2007 and some aspects of this large and detailed plan were appealed to the Environment Court. Hearings into Chapters 4-8 started in late 2007 and continued throughout 2008.[21] The Canterbury Natural Resources Regional Plan chapters on Ngai Tahu and natural resources, air quality, water quality, water quantity, beds of lakes and rivers, wetlands and soil conservation were operative from 11 June 2011,[22] replacing the older Canterbury Regional Council Transitional Regional Plan (October 1991), which was a collection of rules and bylaws predating the Resource Management Act 1991, and was the operative plan for most of the region, except the Waitaki catchment and the Kaikoura area.[23]

There are also four Water Conservation Orders (WCOs) that apply in Canterbury: the Rakaia River WCO, the Lake Ellesmere (Te Waihora) WCO, the Rangitata WCO and the Ahuriri River WCO. 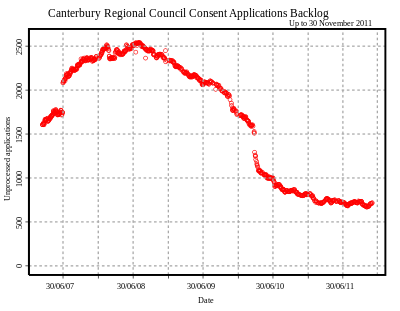 Canterbury Regional Council issues and supervises the most resource consents under the Resource Management Act 1991 of any of the 16 regional councils in New Zealand. In the year ended 30 June 2006, Environment Canterbury processed 3,381 applications, more than double the number processed by any other consent authority (Environment Waikato had the next highest number; 1,384 applications in 2006).[24] By January 2005, Canterbury Regional Council had issued over 14,000 resource consents.[25] The conditions of individual consents can be viewed on line by using the six-digit "CRC" number.[26]

In October 2004, Canterbury Regional Council had a 'backlog' of unprocessed applications due largely to the notification of applications to take groundwater in highly allocated groundwater zones.[27]

The 'backlog' or number of applications for consents being processed, is recorded daily on the Environment Canterbury web site. An upward trend appears to have ended in the middle of 2008, with numbers unprocessed slowly declining into 2009.[28] The sharp increase in applications in June 2007 was due to the review of 400 existing resource consents in the Rakaia-Selwyn groundwater allocation zone.[29]

Canterbury Regional Council received the lowest rating given by rural ratepayers in a Federated Farmers survey on local authorities.[30] The grade took into account the council's level of approachability, degree of bias, provision of roads, value for money, and implementation of the RMA.[31]

In October 2009 the Government announced a review of ECan under Section 24A of the Resource Management Act. The reason cited was that a delay in processing resource consents "is holding the Canterbury region back".[32] In March 2010, after the release of the "Creech Report" the government chose to appoint a panel of commissioners to replace the elected Councillors, as described above.[33]