The Compton wavelength, λ, of a particle is given by

where h is the Planck constant, m is the particle's rest mass, and c is the speed of light. The significance of this formula is shown in the derivation of the Compton shift formula. 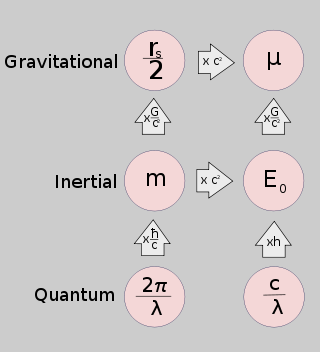 The relation between properties of mass and their associated physical constants. Every massive object is believed to exhibit all five properties. However, due to extremely large or extremely small constants, it is generally impossible to verify more than two or three properties for any object.

It appears in the Dirac equation (the following is an explicitly covariant form employing the Einstein summation convention):

, and rewriting in terms of the fine structure constant, one obtains:

Relationship between the reduced and non-reduced Compton wavelength

A particle of rest mass m has a rest energy of E = mc2. The non-reduced Compton wavelength for this particle is the wavelength of a photon of the same energy. For photons of frequency f, energy is given by

which yields the non-reduced Compton wavelength formula if solved for λ.

The reduced Compton wavelength can be thought of as a fundamental limitation on measuring the position of a particle, taking quantum mechanics and special relativity into account. This depends on the mass m of the particle. To see this, note that we can measure the position of a particle by bouncing light off it - but measuring the position accurately requires light of short wavelength. Light with a short wavelength consists of photons of high energy. If the energy of these photons exceeds mc2, when one hits the particle whose position is being measured the collision may have enough energy to create a new particle of the same type. This renders moot the question of the original particle's location.

This argument also shows that the reduced Compton wavelength is the cutoff below which quantum field theory – which can describe particle creation and annihilation – becomes important.

We can make the above argument a bit more precise as follows. Suppose we wish to measure the position of a particle to within an accuracy Δx. Then the uncertainty relation for position and momentum says that

so the uncertainty in the particle's momentum satisfies

Using the relativistic relation between momentum and energy p = γm0v, when Δp exceeds mc then the uncertainty in energy is greater than mc2, which is enough energy to create another particle of the same type. It follows that there is a fundamental limitation on Δx:

Thus the uncertainty in position must be greater than half of the reduced Compton wavelength ħ/mc.

The Compton wavelength can be contrasted with the de Broglie wavelength, which depends on the momentum of a particle and determines the cutoff between particle and wave behavior in quantum mechanics.

Relationship to other constants

Typical atomic lengths, wave numbers, and areas in physics can be related to the Compton wavelength and the electromagnetic fine structure constant (α)

The Bohr radius is related to the Compton wavelength by:

The classical electron radius is written:

The Rydberg constant is written:

For gauge bosons, the Compton wavelength sets the effective range of the Yukawa interaction: since the photon has no rest mass, electromagnetism has infinite range.

The Planck mass is special because the reduced Compton wavelength for this mass is equal to half of the Schwarzschild radius. This special distance is called the Planck length (