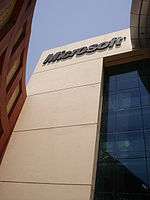 The Microsoft sign at the entrance of the Dubai Microsoft campus, Dubai Internet City.

Dubai Internet City (DIC) (Arabic: مدينة دبي للإنترنت‎) is an information technology park created by the government of Dubai as a free economic zone and a strategic base for companies targeting regional emerging markets. The economic rules of DIC allow companies to avail themselves of a number of ownership, taxation and custom related benefits which are guaranteed by law for a period of 50 years[citation needed]. One model of operation includes 100% foreign ownership, similar to those prevailing in other designated economic zones in the United Arab Emirates[citation needed]. These freedoms have led many global information technology firms, such as Microsoft, IBM, Oracle Corporation, Infor Global Solutions, Sun Microsystems, Cisco, HP, Nokia, Cognizant and Siemens, as well as UAE based companies such as i-mate, Acette, to move their regional base to the DIC. DIC is located adjacent to other industrial clusters such as Dubai Media City and Dubai Knowledge Village.

DIC presently has over one and half million square feet of prime commercial office space, in which over 850 companies with over 10,000 workers are based[citation needed].

On 13 April 2008, du (EITC) announced that all of its traffic would be routed via the UAE's censorship proxy which blocks access to any content deemed 'inappropriate'. du had been previously blocking VOIP services.[1]

While Dubai Internet City sells itself as a business-friendly environment with excellent low cost connectivity, the reality is one of a heavily censored internet with prices that are 5-10 times the price of connectivity in Europe or the USA. In addition to webpage censorship, it is speculated that a variety of popular social networking services are blocked. Cheap calls to the UAE are not possible due to a termination charge of around 17p (UK, around 30 US cents) per minute imposed by the UAE phone networks. Internet connectivity in Dubai is expensive; a 0.5mbit home connection costs around 200 AED per month (about 45 USD). The minimum internet connectivity package available for businesses at DIC is a 2mbit connection with a 6GB monthly limit for around 800 AED (180 USD). Bandwidth beyond the 6GB limit is charged at a higher pro-rata rate than the first 6GB.[citation needed]

The UAE proxy can be bypassed by various methods including by setting up a VPN to connect securely to a server in another country to reduce the amount of Internet censorship, with the advantage that UAE authorities cannot 'snoop' on the traffic.[citation needed] While the UAE may block access to the web sites companies providing VPN services, it is possible[citation needed] to arrange overseas accounts. Such options significantly reduce costs as VOIP systems can be used; for companies who require access to services or content that is blocked, VPNs are a necessity.

Around 11.15 AM on January 30, 2008, a ship's anchor apparently severed fibre optic cables between Palermo, Italy, and Alexandria, Egypt. Providers across the Middle East and as far as India and Pakistan were heavily affected with a significant slowdown of communications reported. The UAE telecommunications company and Dubai Internet City's internet service provider du was one of the worst hit, having been completely inoperational for several hours. Since du has a monopoly in the Free Zones, customers had no alternative connectivity during the outage[citation needed].

The global ICT giants like Microsoft, Oracle Corporation, HP, IBM, Dell, Siemens, Canon, Logica, Sony Ericsson, Schlumberger[citation needed] and Cisco, as well as many small and medium enterprises and entrepreneurial ventures are based in DIC. The ICT cluster in Dubai Internet City comprises companies from sectors like software development, business services, e-commerce, consultancy and sales and marketing. Local bred technology companies like Ducont FZ LLC which was one of the earliest startups at DIC have showed that innovation is possible in the region and quite successful at that.

The cluster environment of DIC provides most elements of the value chain for an ICT business. In addition, it has developed programmes that can be leveraged by the ICT community to explore and expand channel and business development opportunities.

Dubai Internet City, like the whole of Dubai, has seen rapid growth, with the Emirate's GDP rising at double digit rates. However, since 2003 inflation has climbed rapidly too, making real GDP growth significantly lower. The latest official government figures (2006) state inflation of 9.6%. By spring 2008, the level is somewhere over 10%, and approaching 20% according to the estimates of some international banks.[citation needed]

In March 2008, DIC announced a rental increase to 180 AED per square foot - a 25% rise (the government's rent cap on private landlords is 5% for 2008). The DIC statement accompanying the release said "operating costs have shot up recently due to economic growth in the region". It made no mention of the decision by the UAE government in November 2007 to hike federal government employees salaries by 70%.[citation needed]. In late 2008, Dubai property prices began to crash heavily, falling by up to 50% over the next six months. Rents across the emirate fell heavily and many jobs were lost, particularly in real estate. Despite this, DIC rents have not been reduced as of December 2009. The present rent of 160 AED(Juli '11) including service charge(electricity) is roughly double the present rents available in the areas immediately outside DIC.

Dubai Internet City is about 25 kilometers south of downtown Dubai city, on Sheikh Zayed Road between Dubai and Abu Dhabi. It is located adjacent to Dubai Marina, Jumeirah Beach Residence and the well-known Palm Jumeirah, areas which are rapidly becoming three of the most exclusive (and expensive) residential areas of Dubai. DIC is less than 1 km from the sea coast and is near several five star hotels.