Dangerous goods are solids, liquids, or gases that can harm people, other living organisms, property, or the environment. They are often subject to chemical regulations. "HazMat teams" are personnel specially trained to handle dangerous goods. Dangerous goods include materials that are radioactive, flammable, explosive, corrosive, oxidizing, asphyxiating, biohazardous, toxic, pathogenic, or allergenic. Also included are physical conditions such as compressed gases and liquids or hot materials, including all goods containing such materials or chemicals, or may have other characteristics that render them hazardous in specific circumstances.

Dangerous goods are often indicated by diamond-shaped signage. The colours of each diamond in a way has reference to its hazard i.e.: Flammable = red because fire and heat are generally of red colour, Explosive = orange, because mixing red (flammable) with yellow (oxidising agent) creates orange. Non Flammable Non Toxic Gas = green, due to all compressed air vessels being this colour in France after World War II. France is where the diamond system of HazMat identification originated.

Mitigating the risks associated with hazardous materials may require the application of safety precautions during their transport, use, storage and disposal. Most countries regulate hazardous materials by law, and they are subject to several international treaties as well. Even so, different countries may use different class diamonds for the same product. For example, in Australia, Anhydrous Ammonia UN 1005 is classified as 2.3 (Toxic Gas) with sub risk 8 (Corrosive), where as in the U.S. it is only classified as 2.2 (Non Flammable Gas).

People who handle dangerous goods will often wear protective equipment, and metropolitan fire departments often have a response team specifically trained to deal with accidents and spills. Persons who may come into contact with dangerous goods as part of their work are also often subject to monitoring or health surveillance to ensure that their exposure does not exceed occupational exposure limits.

Laws and regulations on the use and handling of hazardous materials may differ depending on the activity and status of the material. For example, one set of requirements may apply to their use in the workplace while a different set of requirements may apply to spill response, sale for consumer use, or transportation. Most countries regulate some aspect of hazardous materials.

Dangerous goods are divided into classes on the basis of the specific chemical characteristics producing the risk.

Note: The graphics and text in this article representing the dangerous goods safety marks are derived from the United Nations-based system of identifying dangerous goods. Not all countries use precisely the same graphics (label, placard and/or text information) in their national regulations. Some use graphic symbols, but without English wording or with similar wording in their national language. Refer to the Dangerous Goods Transportation Regulations of the country of interest.

The statement above applies equally to all the Dangerous Goods classes discussed in this article.

The Australian Dangerous Goods Code, seventh edition (2008) complies with international standards of importation and exportation of dangerous goods in line with the UN Recommendations on the Transport of Dangerous Goods. Australia uses the standard international UN numbers with a few slightly different signs on the back, front and sides of vehicles carrying hazardous substances. The country uses the same "Hazchem" code system as the UK to provide advisory information to emergency services personnel in the event of an emergency.

Outside of federal facilities, labour standards are generally under the jurisdiction of individual provinces and territories. However, communication about hazardous materials in the workplace has been standardized across the country through Health Canada's Workplace Hazardous Materials Information System (WHMIS).

The European Union has passed numerous directives and regulations to avoid the dissemination and restrict the usage of hazardous substances, important ones being the Restriction of Hazardous Substances Directive and the REACH regulation. There are also long-standing European treaties such as ADR and RID that regulate the transportation of hazardous materials by road, rail, river and inland waterways, following the guide of the UN Model Regulation.

European law distinguishes clearly between the law of dangerous goods and the law of hazardous materials. The first refers primarily to the transport of the respective goods including the interim storage, if caused by the transport. The latter describes the requirements of storage (including warehousing) and usage of hazardous materials. This distinction is important, because different directives and orders of European law are applied.

The United Kingdom (and also Australia, Malaysia, and New Zealand) use the Hazchem warning plate system which carries information on how an emergency service should deal with an incident. The Dangerous Goods Emergency Action Code List (EAC) lists dangerous goods; it is reviewed every two years and is an essential compliance document for all emergency services, local government and for those who may control the planning for, and prevention of, emergencies involving dangerous goods. The latest 2009 version is available from the National Chemical Emergency Centre (NCEC) website[3] and as a book[4]. 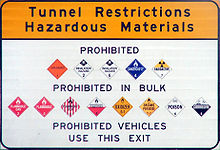 A picture of the U.S. DOT classes in use.

Due to the increase in the perceived threat of terrorism in the early 21st century after the September 11, 2001 attacks, funding for greater HAZMAT-handling capabilities was increased throughout the United States, recognizing that flammable, poisonous, explosive, or radioactive substances in particular could be used for terrorist attacks.

The United States Department of Transportation (DOT) regulates hazmat transportation within the territory of the US by Title 49 of the Code of Federal Regulations[5].

The U.S. Occupational Safety and Health Administration (OSHA) regulates the handling of hazardous materials in the workplace as well as response to hazardous-materials-related incidents, most notably through Hazardous Waste Operations and Emergency Response (HAZWOPER).[6] regulations found at 29 FR 1910.120.

In 1984 the agencies OSHA, EPA, USCG, NIOSH jointly published the first Hazardous Waste Operations and Emergency Response Guidance Manual[6] which is available for download, or can be purchased from the US Government Printing Office, Pub. 85-115[7].

The Consumer Product Safety Commission regulates hazardous materials that may be used in products sold for household and other consumer uses.

Hazard classes for materials in transport

Trailers of goods in transport are usually marked with a four digit UN number. This number can be referenced by first responders (firefighters, police officers, and ambulance personnel) who can find information about the material in the Emergency Response Guidebook.

Packing groups are used for the purpose of determining the degree of protective packaging required for Dangerous Goods during transportation.

One of the transport regulations is that, as an assistance during emergency situations, written instructions how to deal in such need to be carried and easily accessible in the driver’s cabin.

A license or permit card for hazmat training must be presented when requested by officials.

Dangerous goods shipments also require a special declaration form prepared by the shipper. Among the information that is generally required includes the shipper's name and address; the consignee's name and address; descriptions of each of the dangerous goods, along with their quantity, classification, and packaging; and emergency contact information. Common formats include the one issued by the International Air Transport Association (IATA) for air shipments and the form by the International Maritime Organization (IMO) for sea cargo.