Make Way for Ducklings is a children's picture book written and illustrated by Robert McCloskey. First published in 1941, the book tells the story of a pair of mallard ducks who decide to raise their family on an island in the lagoon in Boston Public Garden, a park in the center of Boston, Massachusetts.

Make Way for Ducklings won the 1942 Caldecott Medal for McCloskey's illustrations, executed in charcoal then lithographed on zinc plates.[1][2][3] As of 2003, the book had sold over two million copies.[4] The book's popularity led to the construction of a statue by Nancy Schön in the Public Garden of the mother duck and her eight ducklings, which is a popular destination for children and adults alike. In 1991, Barbara Bush gave a duplicate of this sculpture to Raisa Gorbachev as part of the START Treaty, and the work is displayed in Moscow's Novodevichy Park.[5][6]

The book is the official children's book of the Commonwealth of Massachusetts.[7] Praise for the book is still high over 60 years since its first publication, mainly for the enhancing illustrations and effective pacing.[8] It was criticised for having a loose plot, however, as well as poor characterization.[2] The book is extremely popular worldwide.

Make Way for Ducklings, published in 1941, was McCloskey's second book[9] and was the winner of the Caldecott Medal in 1942. In his acceptance speech, McCloskey explained his motivation for the story. While attending the Vesper George Art School in the early 1930s, he would spend time in the Public Garden feeding the ducks. After some time away, he returned to Boston to paint a mural and created a draft of the book after inspiration from May Massee. To better illustrate the story, McCloskey spent time at the American Museum of Natural History in New York, visited an ornithologist, and eventually brought home for models six ducklings to live in his studio at 280 West 12th Street, apartment 4C in New York's West Village.[2] 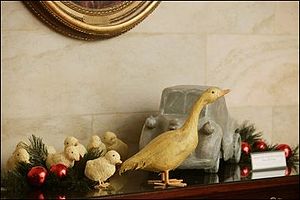 The White House 2003 Christmas decoration using Make Way for Ducklings as the theme. 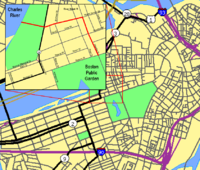 The route Mrs. Mallard takes from the Charles River to the Public Garden. Click on image for detail.

The story begins as Mr. and Mrs. Mallard fly over various potential locations to start a family. Each time Mr. Mallard selects a location, Mrs. Mallard finds something wrong with it. Tired from their search, the mallards land at the Public Garden Lagoon to spend the night. In the morning, a swan boat passes by the mallards. The mallards mistake the swan boat for a real bird and have a second breakfast of peanuts thrown from the people on the boat. Mrs. Mallard suggests that they build their nest in the Public Garden. However, just as she says this, she is nearly run down by a passing bicyclist. The mallards continue their search, flying over Boston landmarks such as Beacon Hill, the Massachusetts State House, and Louisburg Square. The mallards finally decide on an island in the Charles River. From this island, the mallards visit a policeman named Michael on the shore, who feeds them peanuts every day.

One week later, Mrs. Mallard leads the ducklings ashore and straight to the highway in hopes of crossing to reach the Garden, but she has trouble crossing as the cars will not yield to her. Michael, the policeman who fed peanuts to the Mallards, stops traffic for the family to cross. Michael calls police headquarters and instructs them to send a police car to stop traffic along the route for the ducks. The ducks cross the highway, Embankment Road, then proceed down Mount Vernon Street to Charles Street where they head south to the Garden. When the family must cross Beacon Street to enter the Garden, there are four policeman standing in the intersection stopping traffic to make way for the ducklings. Mr. Mallard is waiting in the Public Garden for the rest of the family. Finally, the family decides to stay in the Garden and lives happily ever after.[1] 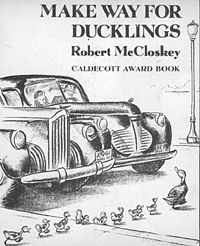 Make Way for Ducklings received the 1942 Caldecott Medal for its illustrations.

Make Way for Ducklings has been continuously in print since it was first published. As of 2003, the book had sold over two million copies.[4] In September 2006 the hardcover edition of the book ranked #2,182 in sales at Amazon.com[10] and #1,838 in sales at Barnes & Noble.[11] The story has also been published in paperback and audiobook.[12]

The book, which received the 1942 Caldecott Medal for its illustrations, has continued to garner praise sixty years after its first publishing. When it was first released in 1941, Ellen Buell of The New York Times called the book "one of the merriest we have had in a long time", praising the understated comedic aspect of the procession down Beacon Street, as well as McCloskey's "fine large pictures" which simultaneously demonstrate "economy of line" and "wealth of detail".[13]

One critic has stated that the illustrations cause the strength of the plot to suffer. One says the "loosely plotted" story gives no true explanation for why Mr. Mallard leaves the island in the Charles River or why the Mallards did not simply stay on the lagoon island in the first place and avoid the bicyclists on the shore. However, McCloskey has stated himself that he thinks of himself as an artist who writes children's books and not vice versa. One critic also find the characterization lacking, that is, the Mallards represent "rather stereotypically concerned parents", often showing the same facial expressions and rarely showing expressiveness.[2]

The drawings of Boston represent a duck's eye view of the city. Each of the individual ducklings are "bored, inquisitive, sleepy, or they are scratching, talking over their backs one to another, running to catch up with the line". Children identify with the ducklings because they behave as children do. The comforting message shows parents as caretakers, protectors, and teachers.[2]

Another critic has positively commented on McCloskey's use of page breaks as a pacing technique. McCloskey's use of one-sentence pages forces the reader to quickly turn the page, enhancing the sense of motion, especially during the home search and when Mrs. Mallard teaches the ducklings their basic skills. McCloskey also employs this page break method to heighten surprise. When searching for a home, Mr. and Mrs. Mallard seem to have found a home on page eleven.[8]

Then, they encounter a sudden problem with the chosen location when Mrs. Mallard is nearly run over by a bicyclist on page thirteen. [8]

When Mr. Mallard leaves on questionable purpose, Mrs. Mallard is charged with raising their ducklings alone. McCloskey portrays Mrs. Mallard as a capable woman who does not need the support of a male character. This strong portrayal has led one critic to label the book as "pre-feminist."[16]

A bronze statue of the ducklings by Nancy Schön is a popular attraction in Boston Public Garden. A replica installed in Moscow was a gift from United States First Lady Barbara Bush to Soviet First Lady Raisa Gorbachev.

The city of Boston, the setting of the book, has whole-heartedly embraced the story. In the Public Garden, where the Mallards eventually settled, a bronze statue has been erected of Mrs. Mallard and her eight ducklings. While the tallest statue stands only 38 inches (.97 meters) tall, the caravan of bronze ducks set in Boston cobblestone spans 35 feet (10.67 m) from front to back. The statue, installed October 4, 1987, was a tribute to Robert McCloskey "whose story ... has made the Boston Public Garden familiar to children throughout the world."[6]

Since 1978, the city has hosted an annual Duckling Day parade each spring, with children and their parents dressed as ducklings. Part of the route retraces the path taken by Mrs. Mallard and her ducklings to get to the Public Garden.[17][18]

A statue similar to the one in the Boston Public Garden was erected in Novodevichy Park in Moscow as part of the START Treaty on July 30, 1991. The statue, which was 40 feet (12 m) long, was presented by then United States First Lady Barbara Bush to Russian First Lady Raisa Gorbachev as a gift to the children of the Soviet Union.[20] Four of the ducks were stolen, three in February 2000 and one in 1991. Thieves hoping to sell the ducks as scrap metal cut the statues off at the legs. The ducks were replaced in September 2000 at a rededication ceremony attended by former President of the Soviet Union Mikhail Gorbachev.[21]

Make Way for Ducklings was adapted into an 11 minute black-and-white cartoon created by Weston Woods in 1955.[22] Founded by educator Morton Schindel in 1953, Weston Woods Studios, Inc.(named after the wooded area outside his home in Weston, Connecticut) specializes in animating children's picture books on film. The program is centered toward young struggling readers who, after watching the movie, are encouraged to read the books themselves.[23][24]

In 2008, in Spokane, Washington, and again in 2009 a mallard laid her eggs on the ledge above the door to a bank in downtown. She and her brood were assisted by an employee of the bank who caught the ducklings as they jumped from the 10-foot (3.0 m) ledge over a concrete sidewalk. Once all the ducklings were down the mother "paraded" them through city streets to the Spokane river, complete with a crowd of people stopping traffic, and someone holding up a "brake for ducks" sign.[25][26][27]