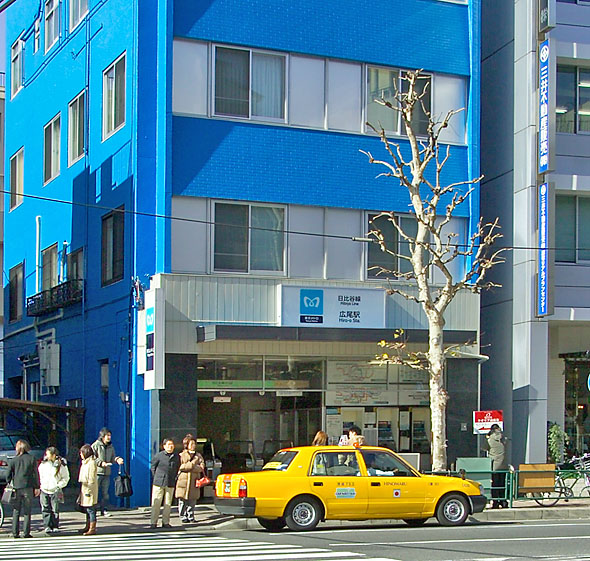 Platform 1 is for passengers traveling toward via Ebisu, and Platform 2 is for services to via Roppongi, Ginza, Tsukiji, and Akihabara.

Exit 1 is convenient for visitors to the Arisugawa-no-Miya Memorial Park, the Tokyo Metropolitan Central Library, the Hiroo shopping arcade, and the Kitazato Research Hospital. Exit 2 serves those going to Seishin Women's College or the Tokyo Metropolitan Hiroo Hospital. Those bound for the Japan Red Cross Nursing College or Treatment Center, or going toward Aoyama, will find Exit 3 best.

Hiroo has a reputation for being a desirable upscale residential area with convenient access to a variety of popular areas in Tokyo. It is located on the borders of Shibuya and Minato wards in Tokyo. Hiroo is within walking distance of the nightlife district , as well as trendy shopping and dining areas like Ebisu, Azabu Juban, and Daikanyama.

Hiroo is home to many expatriates and professionals working in Tokyo. There are several embassies and international schools in the area. The German Embassy is a short walk from the station. Hiroo is further home to National Azabu Supermarket, an upscale grocery store featuring foreign brands.

The Hiroo Shopping street offers an interesting mix of traditional Japanese craft stores and modern boutiques. The Mormon is accessed through Hiroo Station as is Arisugawa Memorial Park.