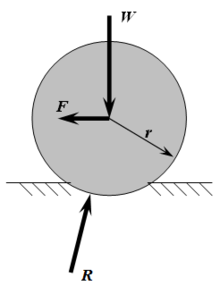 Figure 1  Hard wheel rolling on and deforming a soft surface, resulting in the reaction force from the surface having a component that opposes the motion.

Rolling resistance, sometimes called rolling friction or rolling drag, is the resistance that occurs when a round object such as a ball or tire rolls on a flat surface, in steady velocity straight line motion. It is caused mainly by the deformation of the object, the deformation of the surface, or both. Additional contributing factors include wheel radius, forward speed,[1] surface adhesion, and relative micro-sliding between the surfaces of contact. It depends very much on the material of the wheel or tire and the sort of ground.

The primary cause of rolling resistance is hysteresis:

A characteristic of a deformable material such that the energy of deformation is greater than the energy of recovery. The rubber compound in a tire exhibits hysteresis. As the tire rotates under the weight of the vehicle, it experiences repeated cycles of deformation and recovery, and it dissipates the hysteresis energy loss as heat. Hysteresis is the main cause of energy loss associated with rolling resistance and is attributed to the viscoelastic characteristics of the rubber.

Factors that contribute in tires

There are at least two popular models for calculating rolling resistance.

The results of these tests can be hard for the general public to obtain as manufacturers prefer to publicize "comfort" and "performance".

The force of rolling resistance, not adjusted for velocity, can be calculated by[3]:

The power required to overcome this rolling resistance at a given velocity can be expressed as:

P is the power required,
Crr is the dimensionless rolling resistance coefficient or coefficient of rolling friction (CRF), and
N is the normal force (equal to W, not R, as shown in figure 1).
v is the forward speed,

The coefficient of rolling friction for a slow rigid wheel, not adjusted for velocity, can be calculated by[1][2]

The force of rolling resistance can also be calculated by[1]:

Equating the above two equations, and solving for b, gives b = Crr·r. Therefore, if a source gives rolling resistance coefficient (Crr) as a dimensionless coefficient, it can be converted to b, having units of length, by multiplying Crr by wheel radius r.

In usual cases, the normal force on a single tire will be the mass of the object that the tires are supporting divided by the number of wheels, plus the mass of the wheel, times the gravitational acceleration (9.81 m·s−2 on earth). In other words, the normal force is equal to the weight of the object being supported, if the wheel is on a horizontal surface.

The above equations don't include variation of rolling resistance with speed. This is a reasonable simplification but measurements at different speeds show some variation.[9]

Rolling friction generates heat and sound (vibrational) energy, as mechanical energy is converted to these forms of energy due to the friction. One of the most common examples of rolling friction is the movement of motor vehicle tires on a roadway, a process which generates sound and heat as by-products.[16] The sound generated by automobile and truck tires as they roll (especially noticeable at highway speeds) is mostly due to the percussion of the tire treads, and compression (and subsequent decompression) of air temporarily captured within the treads. The heat generated raises the temperature of the frictional surface; moreover, this temperature increase typically increases the coefficient of friction.[17] This is why automobile racing teams preheat their tires.