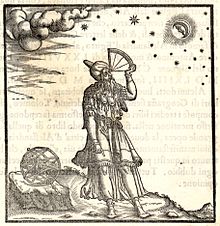 A quadrant is an instrument that is used to measure angles up to 90°. It was originally proposed by Ptolemy as a better kind of astrolabe.[1] Several different variations of the instrument were later produced by medieval Muslim astronomers.

There are several types of quadrants:

They can also be classified as[2] 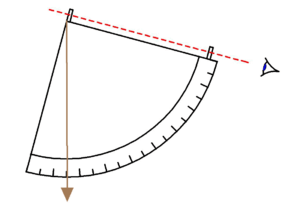 The geometric quadrant is a quarter-circle panel usually of wood or brass. Markings on the surface might be printed on paper and pasted to the wood or painted directly on the surface. Brass instruments had their markings scribed directly into the brass.

Along one edge there were two sights forming an alidade. A plumb bob was suspended by a line from the centre of the arc at the top.

In order to measure the altitude of a star, the observer would view the star through the sights and hold the quadrant so that the plane of the instrument was vertical. The plumb bob was allowed to hang vertical and the line indicated the reading on the arc's graduations. It was not uncommon for a second person to take the reading while the first concentrated on observing and holding the instrument in proper position.

The accuracy of the instrument was limited by its size and by the effect the wind or observer's motion would have on the plumb bob. For navigators on the deck of a moving ship, these limitations could be difficult to overcome. 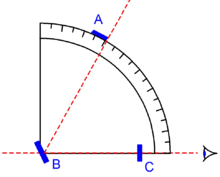 Drawing of a back observation quadrant. This instrument was used in the manner of a backstaff to measure the altitude of the sun by observing the position of a shadow on the instrument.

In order to avoid staring into the sun to measure its altitude, navigators could hold the instrument in front of them with the sun to their side. By having the sunward sighting vane cast its shadow on the lower sighting vane, it was possible to align the instrument to the sun. Care would have to be taken to ensure that the altitude of the centre of the sun was determined. This could be done by averaging the elevations of the upper and lower umbra in the shadow.

In order to perform measurements of the altitude of the sun, a back observation quadrant was developed.[5]

With such a quadrant, the observer viewed the horizon from a sight vane (C in the figure on the right) through a slit in the horizon vane (B). This ensured the instrument was level. The observer moved the shadow vane (A) to a position on the graduated scale so as to cause its shadow to appear coincident with the level of the horizon on the horizon vane. This angle was the elevation of the sun. 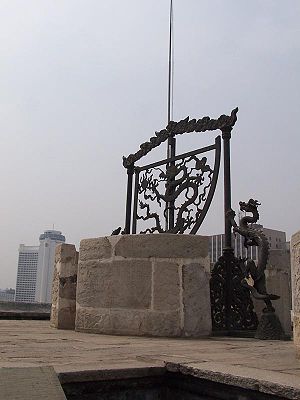 A large frame quadrant at the ancient Beijing Observatory. It was constructed in 1673.

Large frame quadrants were used for astronomical measurements, notably determining the altitude of celestial objects. They could be permanent installations, such as mural quadrants. Smaller quadrants could be moved. Like the similar astronomical sextants, they could be used in a vertical plane or made adjustable for any plane.

When set on a pedestal or other mount, they could be used to measure the angular distance between any two celestial objects.

The details on their construction and use are essentially the same as those of the astronomical sextants; refer to that article for details.