Seine fishing is fishing using a seine. A seine is a large fishing net that hangs in the water due to weights along the bottom edge and floats along the top. Boats equipped for seine fishing are called seiners.

Seine nets are usually long flat nets like a fence that are used to encircle a school of fish, with the boat driving around the fish in a circle.

There are two main types of seine net: purse seines and Danish seines. 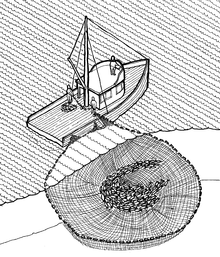 A common type of seine is a purse seine, named such because along the bottom are a number of rings. A rope passes through all the rings, and when pulled, draws the rings close to one another, preventing the fish from "sounding", or swimming down to escape the net. This operation is similar to a traditional style purse, which has a drawstring.

The purse seine is a preferred technique for capturing fish species which school, or aggregate, close to the surface: such as sardines, mackerel, anchovies, herring, certain species of tuna (schooling); and salmon soon before they swim up rivers and streams to spawn (aggregation). Boats equipped with purse seines are called purse seiners.

The power block is a mechanized pulley used on some seiners to haul in the nets. According to the UN Food and Agriculture Organization, no single invention has contributed more to the success of purse seine net hauling than the power block.[1]

The Puretic power block line was introduced in the 1950s and was the key factor in the mechanization of purse seining. The combination of these blocks with advances in fluid hydraulics and the new large synthetic nets changed the character of purse seine fishing. The original Puretic power block was driven by an endless rope from the warping head of a winch. Nowadays, power blocks are usually driven by hydraulic pumps powered by the main or auxiliary engine. Their rpm, pull and direction can be controlled remotely.[1]

A minimum of four people are required for power block seining; the skipper, skiff operator, corkline stacker, and leadline stacker.

In Canada, specifically on the coast of British Columbia drum seining is a method of seine fishing which was adopted in the late 1950’s and is now used excusively in that region.[2]

The drum seine uses a horizonally mounted drum to haul and store the net instead of a power block. The net is pulled in over a roller, which spans the stern, and then passes through a spooling gear with upright rollers. The spooling gear is moved from side to side across the stern which allows the net to be guided and wound tightly on the drum.[3]

There are several advantages to the drum seine over the power block. The net can be hauled very quickly, more than twice the speed of using a power block, the net does not require overhead handling and the process is therefore safer. The most important advantage is that the drum system can be operated with fewer deckhands.

A Danish seine, also occasionally called an anchor seine, consists of a conical net with two long wings with a bag where the fish collect. Drag lines extend from the wings, and are long so they can surround an area.

A Danish seine is similar to a small trawl net, but the wire warps are much longer and there are no otter boards. The seine boat drags the warps and the net in a circle around the fish. The motion of the warps herds the fish into the central net.

Danish seiner vessels are usually larger than purse seiners, though they are often accompanied by a smaller vessel. The drag lines are often stored on drums or coiled onto the deck by a coiling machine. A brightly coloured buoy, anchored as a "marker", serves as a fixed point when hauling the seine. A power block, usually mounted on a boom or a slewing deck crane, hauls the seine net.

Danish seining works best on demersal fish which are either scattered on or close to the bottom of the sea, or are aggregated (schooling). They are used when there are flat but rough seabeds which are not trawlable. It is especially useful in northern regions, but not much in tropical to sub-tropical areas.

The net is deployed, with one end attached to an anchored dan (marker) buoy, by the main vessel, the seiner, or by a smaller auxiliary boat. A drag line is paid out, followed by a net wing. As the seiner sweeps in a big circle returning to the buoy, the deployment continues with the seine bag and the remaining wing, finishing with the remaining drag line. In this way a large area can be surrounded. Next the drag lines are hauled in using rope-coiling machines until the catch bag can be secured.

The seine netting method developed in Denmark. Scottish seining ("fly dragging") was a later modification. The original procedure is much the same as fly dragging except for the use of an anchored marker buoy when hauling, and closing the net and warps and net by winch.