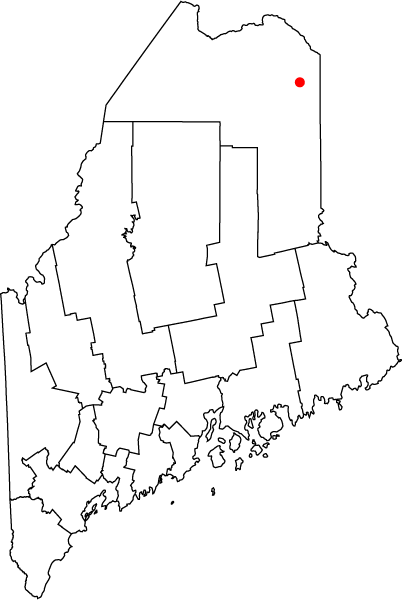 mapsize = 250px
map_caption = Location of city of in state of Maine

Caribou is a city in Aroostook County, , . Its population was 8,312 at the 2000 census. The city is the birthplace of current U.S. Senator .

Caribou is located in the geographical center of . is readily accessible by two major highways; Interstate 95 from the South and the 2 from the North and East. Caribou is located on the northern bend of the before it heads southeast to join the in just east of . In the sparsely populated , Caribou is at the hub of spokes serving the area via U.S. 1 and Maine Routes 89, 161, 164, 205 and 228. in serves as the primary hub for air service. Daily flights are scheduled to and from Northern Maine with daily connections to Boston’s . Seaports are also close by in coastal , and . The closest deep water port is , convert|120|mi|km away from Caribou. is a convert|745|mi|km|sing=on regional railway operating in the states of Maine, Vermont and in the Canadian provinces of Quebec and New Brunswick, providing a direct rail link between Northern Maine, and .

Given the city's economic and cultural ties with the Canadian provinces of and , cross-border partnerships and relationships are often a common facet in many businesses.

Spring in begins with maple tree tapping and the picking of fiddleheads along the many rivers in late May. Fiddleheads, the very young, coiled leaves of the ostrich fern, are a county delicacy. Spring is known as the ‘mud season’, which suits many local ATV owners. Designated areas of the snowmobile trail system may be used for all terrain vehicles.

Warm days and cool nights characterize summers. The area is generally favored with abundant rainfall, which is one of the most important factors in the high yield of the potato and grain crops throughout the county. The growing season in Caribou averages more than 120 days.

Autumn climate is nearly ideal, with mostly sunny warm days and cool nights predominating. The end of September begins the Potato harvest; this is truly a community event. Many schools still close during the harvest so that local farmers who lack modern equipment may hire the children at low wages.

Snowfall can occur during any month, but usually the first snowfall occurs in November.

In 1793, Alexander Cochran visited the area in 1793 seeking a mill site. Fourteen years later, Charles Turner surveyed ten thousand acres (40 km²) of land in Northern , then part of the state of . In 1808 Captain William Eaton was deeded these same 10,000 acres (40 km²) as a reward for his heroic victory over the Barbary Pirates, this estate became known as the Eaton Grant and is now the southeast section of Caribou. Around 1824 settlers began arriving from , and settled land on the north side of the . However, European settlers awaited the conclusion of the northern boundary dispute with Canada before arriving in large numbers, in 1843. Caribou was incorporated on April 5, 1859 as the town of Lyndon from Eaton Plantation and part of half-township H. In 1869 Lyndon annexed Eaton, Sheridan and Forestville plantations. On February 26 of that year its name was changed to Caribou, only to be changed back to Lyndon on March 9. Finally on February 8, 1877 Caribou was confirmed as the town's permanent name. Caribou was incorporated as a city February 23, 1967. The city's population decline began to decline soon thereafter, associated with difficulties in the traditional potato industry and the closing of nearby in .

There were 3,517 households out of which 27.7% had children under the age of 18 living with them, 52.9% were married couples living together, 9.7% had a female householder with no husband present, and 33.9% were non-families. 28.7% of all households were made up of individuals and 13.1% had someone living alone who was 65 years of age or older. The average household size was 2.32 and the average family size was 2.84.

In Caribou and throughout , the two major agricultural crops are the and . Area farmers annually plant approximately 80,000 acres (320 km²) of potatoes. The chief varieties are Russett Burbank, Superior, Shepody and Atlantic. is renowned for its Round White potatoes. The potato crop is used for seed, table stock, and processed potato products. is the largest grower of broccoli on the East Coast.

Other important agricultural crops grown in the area include , , , and alternative crops on a smaller scale. The high volume of activity results in the growth of related agri-business. Farm implement sales and services and the development of several area processing plants are examples of the influence agriculture has on the local economy.

, serving the third and the s as well as two pre-school classrooms.

, serving the fifth through s.

Caribou has over a dozen cross country ski trails with varied scenery and terrain within a one hour drive of the city.
is widely known by sports enthusiasts for its well-groomed extensive trail system; Caribou maintains convert|170|mi|km of ’s convert|1600|mi|km|sing=on snowmobile trail system. A major tourist destination for snowmobile enthusiasts throughout the country, who take advantage of the more than convert|1600|mi|km of groomed snowmobile trails, which have been rated the third best in the nation. Snowmobilers can venture out every day, choose a variety of routes and with the number of loop trails never cross the same trail twice. Many county communities are located on the Canadian border, making international travel by snowmobile convenient. Running through the heart of is the , and linking , , , and the Province of .

The Caribou Performing Arts Center draws acts and shows from all over the United States and Canada. Caribou also has a thriving music program centered around the Caribou Music Department. Music education has been a vital part of the education system in Caribou for years. The Caribou High School Music Building Fund, a student-initiated non-profit organization, is currently raising $2.7 million for a new music facility to be located at the high school. The new facility will allow Caribou High School students to utilize increased practice space and music technology to significantly further music education. Additionally, the facility will be open to community groups and musicians from all over Caribou and Aroostook County to use as the only center for music in Northern Maine.