West Melbourne is an inner city suburb of Melbourne, Victoria, Australia, 3 km north-west from Melbourne's central business district. Its Local Government Area is the City of Melbourne. At the 2006 Census, West Melbourne had a population of 3037.

West Melbourne is bounded by Victoria Street and the Footscray Rail line in the North, Footscray Road and the Moonee Ponds Creek and the Yarra River in the south. Peel Street and the Flagstaff Gardens help form the Eastern Boundary, with the Western Boundary defined by the Maribyrnong River and Coode Island, a locality of West Melbourne which is home to Victoria's largest toxic chemical storage facility.

Being largely an industrial area, a significant portion of West Melbourne is occupied by the Port of Melbourne, the Dynon railway yards and the Melbourne Markets. These include the Wholesale Fruit and Vegetable and Fish Markets as well as the National Flower Centre. It also contains a small pocket of residential and commercial properties, consisting of a mixture of Victorian single and double storey terrace houses and converted warehouses at the north-west corner of the Melbourne CBD. It is also home to the Queen Victoria Market located on corner of Victoria and Peel Streets.

West Melbourne Post Office opened on 1 March 1937 and was replaced by the Queen Vic Market Newsagency office in 1990 which closed in 1996.[2]

The North Melbourne railway station is actually situated in West Melbourne, opposite the Railway Hotel on Ireland Street.

A number of tram routes run along the periphery of the suburb, along Victoria Street, Peel/William Street and LaTrobe Street. 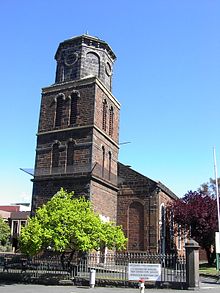 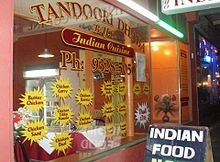 One of the West Melbourne's restaurants 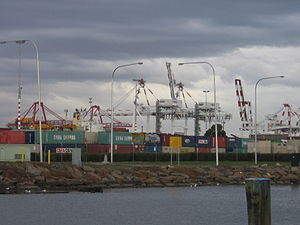 Coode Island viewed from the west

North of the railway lines

The area bounded by Railway Parade and Spencer St has undergone significant change since 2000. While the region has always been mixed industry and residential, the industrial flavour of the area has diminished rapidly, as West Melbourne's population increases. In Dryburgh, Laurens, Ireland, Stanley and Adderley Streets, the majority of the warehouses have been converted to townhouse developments. The development nearby of the Docklands has had a significant impact on the perceived prestige of the area, and it is rapidly losing its status as one of the most affordable precincts with such proximity to the CBD.

West Melbourne lays claim to the southern side of Victoria Street, meaning that a small range of restaurants and shops lie within its boundaries. Otherwise it has no shopping area of its own. However the Direct Factory Outlet development on Spencer St in the CBD, and Errol St North Melbourne sit just outside the boundary of West Melbourne.

Coode Island is a locality in West Melbourne's industrial zone. It is unusual in that although it is a locality of West Melbourne, with the creation of Melbourne Docklands and Bolte Bridge the area has become completely disonnected from the main area of the suburb.

It is the site of Victoria's major petrochemical storage facility. The area is named after engineer John Coode and retains the "Island" name despite no longer being an island.