John Jameson (also known by the aliases Man-Wolf, Stargod, and Colonel Jupiter) is a fictional character in publications from Marvel Comics.

John Jameson debuted in Amazing Spider-Man #1 (March 1963), and was created by Stan Lee and Steve Ditko.

John Jonah Jameson III was born in New York City. He is the son of J. Jonah Jameson, the irascible, gruff publisher of the Daily Bugle. Jonah is immensely proud of his son, whom he sees as a true hero. Initially an astronaut, he was first seen being saved by Spider-Man when his craft malfunctioned on re-entry, something that did nothing to endear the wall-crawler to his father, who resents Spider-Man's form of heroism.

On a later mission, Jameson was infected with spores that gave him super-strength, but strained his body and mind. He was forced to wear a strength-restraining "Jupiter suit" and battled Spider-Man at his father's urging before recovering. His father convinced him to go after Spider-Man, who was seen robbing a bank. The web-slinger outsmarted him, and Jonah soon learned that Spider-Man was saving the bank from a bomb. However, John didn't care about the misunderstanding; he was really out for revenge. Spider-Man managed to neutralize the spores with electricity, returning Jameson to normal.[1]

While he was on the moon, Jameson found the mystical Godstone, an other-dimensional ruby. The jewel grafted itself to his throat and extended tendrils through his body. Moonlight activated the gem, which transformed him into the lycanthropic Man-Wolf,[2] and he fought Spider-Man in this bestial form. The ruby was removed by Spider-Man.

Some time after that, the ruby was reattached to John by Morbius, the Living Vampire who used Man-Wolf as a pawn so Morbius could find a cure for himself. Man-Wolf was again thwarted by Spider-Man.

Later, he was transported to the dimension known as Other Realm, from which the ruby originated and the source of the radiation that transforms John into the Man-Wolf. It was revealed that the ruby was created by the dying Stargod to pass on his powers. While on Earth Jameson could only partially transform, resulting in his berserk behavior. While in the Other Realm he could fully transform, resulting in retention of his human consciousness while in lupine form. He took up the mantle of Stargod, and acted as champion of the Other Realm, and gained new powers such as telepathy and energy manipulation. He fought his foes with a sword, dagger, and longbow in this incarnation.[3] Afterward, he opted to return to Earth, resulting in him losing the ability to fully transform, and the loss of all memories of being the Stargod. He later allowed himself to be subjected to a procedure that removed the ruby, restoring normalcy for some time.[4]

Jameson became the pilot of Captain America's personal Quinjet for a period, using the call-sign "Skywolf". During this time, he was temporarily transformed into Man-Wolf by Dredmond Druid, who wanted the power of the Stargod. Jameson left Captain America's employ due to his attraction to Cap's then girlfriend, Diamondback.

Jameson remains friends with Spider-Man and often tries to convince his father to "let up on him." He spent some time as Ravencroft Head of Security and briefly dated its director Dr. Ashley Kafka. Both John and Ashley were fired by a director angry about the escape of the Chameleon and his subsequent wounding by Kraven the Hunter II. Via hypnotherapy, Kafka helped discover that Jack O'Lantern had caused him to attack his hospitalized father. This therapy also briefly unleashed John's Man-Wolf aspect before Ashley was able to help John suppress his changes once more.

During the Civil War storyline, John helped Captain America while the latter was in hiding. He was assisting She-Hulk in locating and signing up unregistered superheroes. John has also been registered as the Man-Wolf under the Superhuman Registration Act.[volume & issue needed] During this time, the villain Stegron temporarily transformed him into the Man-Wolf again, as a side-effect of his latest mad scheme, to devolve the entire population of New York City. He attacked Mary Jane and Aunt May in the Avengers Tower, but was subdued by Tony Stark's Guardsmen before he could harm them. [5] Reed Richards subsequently cured him of this form. [6]

When it came to John Jameson's next mission into space, Alistair Smythe, Scorpion, and a new villain named Fly-Girl attack the launch site with an army of cyborg minions (each one wanting revenge on J. Jonah Jameson) where they sabotaged the launch and hold John Jameson for ransom.[7]

Jameson is a skilled pilot and astronaut and is experienced in hand-to-hand combat and a variety of weapons.

Jameson possessed superhuman strength, agility, speed, healing, and durability, as well as heightened senses. He also has large razor sharp teeth and claws to use as weapons once transformed. The Man-Wolf's strength and degree of intelligence varied according to the phases of the moon. Jameson did not retain his personality or intelligence while in Man-Wolf form. He was not a traditional werewolf and was not vulnerable to silver. While in the Other Realm, Jameson possessed both his human intellect and the Man-Wolf's body, as well as vast superhuman strength, a high degree of durability, and telepathic powers.

Jameson possesses both his human intellect and the Man-Wolf's body. He has cosmic powers, the full extent of which is yet unrevealed. He wears scale mail armor and uses a broadsword, dagger, short bow, and arrows.

On Earth X, John Jameson lives on the moon and is the father of Jay Jameson. He first appeared in Earth X #0.

In the House of M universe, John Jameson was part of the project that gave the Fantastic Four their powers. Jameson is in the spacecraft along with Ben Grimm, Reed Richards, and Susan Storm. Instead of transforming into the Torch he died along with Richards and Sue, leaving only Ben alive in the form of the Thing but calling himself The It.[volume & issue needed]

In the alternate-future known as MC2, John Jameson married Dr. Ashley Kafka and they had a son, Jack. Jack became the costumed adventurer known as The Buzz.

In the alternate world of newuniversal, Lieutenant General John Jameson is assistant to the Chairman of the Joint Chiefs of Staff, General Thad Ross, and is involved in arranging an airstrike to kill Ken Connell. The attempt is unsuccessful.[8]

In the Ultimate Marvel universe, J. Jonah Jameson made reference to his dead astronaut son, calling him a "true hero". Jonah doesn't mention his son by name, but doesn't indicate that he has any other kids. Jonah says his son died when the space shuttle Orion burned up in orbit. Although the incident was implied to be public knowledge, details on the cause were classified.[volume & issue needed] 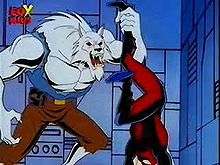