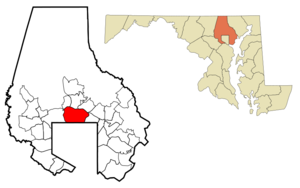 The first inhabitants of the Towson region were the people who hunted in the area. Though their region included all of , their primary settlement was along the mouth of the . [Towson: A Pictorial History of a Maryland Town, page 13, Henry George Hahn, Carl Behm, 1977, Donning Co. , ISBN 0915442361]

Towson was settled in 1752 when two Pennsylvania brothers, William and Thomas Towson, began farming northeast of present-day York and Joppa Roads. William's son, Ezekial, started the Towson Hotel at York and Joppa Roads in 1768 to serve the increasing traffic of farmers bringing their produce and livestock to the port of Baltimore. The village became known as "Towsontown".

In 1790, completed the magnificent Hampton Mansion just north of Towsontown, the largest private house in America at the time. The Ridgely's lived there for six generations, until 1948. [cite book|author=Ann Milkovich McKee|title=Images of America &mdash; Hampton National Historic Site|publisher=Charleston, SC: Arcadia Publishing|date=2007|isbn=978-0-7385-4418-2] It is now preserved as the and open to the public.

On , , Towson became the of Baltimore County. The Court House, still in use, was constructed with stone donated by the Ridgely family, on land donated by Towson merchant Grafton Bosley.

From 1850 to 1874, another notable land owner / Amos Matthews, had a farm of 150 acres that - with the exception of the 17-acre largely natural parcel where the (currently Towson YMCA), was later erected - was wholly developed into the neighborhoods of , and other subdivisions beginning in the middle 1920's. [A Brief History of West Towson, by David A. Loizeaux http://www.bcplonline.org/info/history/hist_west_towson.html]

Towson was briefly the scene of a minor engagement between Union and Confederate forces during the Civil War. On , , a 130-man Confederate cavalry detachment attacked the in nearby Cockeysville, under orders from Gen. Bradley T. Johnson. After cutting telegraph wires along Harford Road, they encamped at Towson overnight. The next day, the Confederate cavalry skirmished with a smaller force of Union cavalry along York Road as far south as Govans, before heading west to rejoin Gen. Johnson's main force. [cite book|author=Daniel Carroll Toomey|title=The Civil War in Maryland|publisher=Toomey Press|location=Baltimore, Md.|date=1983|page=pp. 127-129|isbn=0-9612670-0-3]

During the summer of 1894, the Towson Water Company laid wooden pipes and installed fire hydrants that were connected to an artesian well near Aigburth Vale. On November 2 1894, Towson was supplied with electric service through connection with the Mount Washington Electric Light and Power Company. [A History of Baltimore County, Neal A. Brooks and Eric J. Rockel, ISBN 0960232613, p. 297]

At the beginning of the century, Towson remained largely a rural community. Land continued to be sold by the acre, rather than as home parcels. Most residences lay within Towson proper: no houses existed West of Central Avenue along the Allegheny, or Pennsylvania avenues; and there were only three homes along the West Chesapeake avenue corridor. [A History of Baltimore County, Neal A. Brooks and Eric J. Rockel, ISBN 0960232613, p. 298]

As the growth of Baltimore's suburbs became more pronounced after , considerable office development took place in Towson's central core area. Many of the large Victorian and colonial-style residences in the vicinity of the Court House were demolished in the 1980s and 1990s for offices and parking.

In 1839, Epsom Chapel became the first Christian house of worship in Towson, used by various denominations. As the population grew in the late 19th and early 20th centuries, several churches were built to serve the community, such as Calvary Baptist Church, Immaculate Conception Catholic Church, Trinity Episcopal Church, First Methodist Church, and Towson Presbyterian Church. Epsom Chapel was demolished in 1950 when sold a portion of its property for development of the Towson Plaza shopping center, now . First Methodist Church moved in 1958 to land also acquired from Goucher College and is now .

The community is located immediately north of Baltimore City, inside the Beltway (I-695), east of and along York Road. Its census boundaries include Pikesville to the west, Lutherville-Timonium and Hampton to the north, Parkville to the east, and Baltimore to the south.

Major neighborhoods in Towson include: Anneslie, Idlewylde, Greenbriar, Rodgers Forge, Stoneleigh, Wiltondale, Southland Hills, Hampton, Hunt Crest Estates, East Towson, and . Ruxton, which lies to the west, is sometimes considered a part of Towson. Eudowood is a Towson neighborhood named after Eudocia, the wife of Dr. John T. Stansbury - on whose former estate it is situated. [A History of Baltimore County, Neal A. Brooks and Eric J. Rockel, ISBN 0960232613, p. 292]

Lying north of the city of , and at the southern edge of the Piedmont gives Towson an "in-between" climate, lying between the zone to the south and the zone to the north. Summers are hot and humid, with daytime highs reaching into the 90s in July and August. Spring and fall bring pleasant temperatures in the 60s and 70s with moderate rainfall. Winters are mild by American standards but can still include occasional snowfall and freezing rain, with typical highs just above 40 degrees and lows in the mid 20s. Annual rainfall totals convert|45|in|cm|0.

There were 21,063 households out of which 23.1% had children under the age of 18 living with them, 43.6% were married couples living together, 7.8% had a female householder with no husband present, and 46.2% were non-families. 36.4% of all households were made up of individuals and 17.3% had someone living alone who was 65 years of age or older. The average household size was 2.16 and the average family size was 2.87.

The primary mode of transportation in Towson is the . The streets are wide and, with the exception of the downtown area, most shops and restaurants have their own free parking for customers. Towson is accessible from exits 25 through 29B of the Baltimore Beltway (I-695).

Railroad service began to Towson on , , with construction of the Baltimore & Delta Railway Company, soon renamed the Baltimore & Lehigh Railroad and later reorganized as the . The "Ma and Pa", as it was affectionately known locally, formerly operated between Baltimore and , through Towson. Its passenger station was located just west of York Road on Susquehanna Avenue. Passenger service was discontinued on , , and the railroad line through Towson was finally abandoned altogether on , , leaving only the stone abutments where the tracks crossed York Road on a steel girder bridge. [cite book|author=George W. Hilton|title=The Ma & Pa &mdash; A History of the Maryland & Pennsylvania Railroad|publisher=Howell-North Books|location=Berkeley, CA|date=1963|id=LCCN 63-17444] One passenger on the last passenger train recalled that many riders came from as far away as Boston and , to participate in the historic event, along with members of the . [cite news|author=John R. Eicker|title=The Ma and Pa's Last Run from Baltimore to York|publisher=""|date=, ] Historic Towson, a local group of history buffs, installed a bronze plaque on the west abutment in 1999, commemorating the defunct railroad's place in Towson's history. [cite news|author=Loni Ingraham|title='Ma and Pa' railroad abutments get HTI plaque|publisher="The Towson Times"|date=, ]

The Towson area has several bus lines operated by the . These include:
*Route 8, which operates along York Road to Lutherville and downtown Baltimore (formerly the #8 streetcar line)
*Route 11, which serves the Charles Street corridor and hospital
*Route 55, which operates cross-county service to Parkville, Overlea, Rosedale, and Essex
*Route 3, which serves the Loch Raven Boulevard corridor, with selected trips along Joppa Road.
*Route 12 operates along York Road and Dulaney Valley Road to at the times needed for the facility's change of shift.

Towson also has light rail service to downtown Baltimore and along its periphery via the Lutherville and Falls Road stops.

and also operate bus services for their students, and the [http://www.baltimorecollegetown.org/asp/shuttle.asp Collegetown Shuttle] has several stops in the area.

Towson has some of Baltimore County's largest shopping areas. These include:

Towson Town Center is Baltimore County's largest indoor mall, with four stories of shops and a parking garage, which is also linked to some other shops across the street, including a , which structurally is beneath near the .

One block away from Towson Town Center is Towson Commons, a smaller mall that was once most notably home to , but has since declined.

The Shops at Kenilworth

The Shops at Kenilworth, formerly known as Kenilworth Park, is a small indoor mall located on . The mall at one time was home to an express location of the Motor Vehicle Administration, which has since moved.

The Towson Marketplace is a major shopping area near , , and . Once a small indoor mall, the location has been converted into some and supermarkets, including a , Target, , , , and .

is a public school in southern Towson. With 18,000 students it is the second largest institution in the . It was founded in 1866 as the Maryland State Normal School for the training of teachers. North of downtown is a small private liberal arts school, , which was founded in 1885 as "The Woman's College of Baltimore".

Towson is served by the district, and the Baltimore County Board of Education headquarters is located here as well. There are three high schools. was the first secondary school founded and is Towson's largest, while dates from 1972. The is a local magnet school.

The Towson area has a number of long-established private schools at the level, including , , , , Notre Dame Preparatory School.

In fiction, the character , of the 1990s "", is from Towson. The character in the "" novels by , resided in a townhouse in Towson. 's fictional CIA Analyst character was born in Towson.