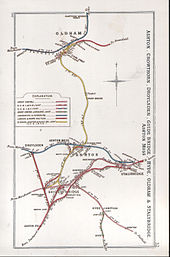 The station was opened on 13 April 1846 by the Ashton, Stalybridge & Liverpool Junction Railway. The Manchester & Leeds Railway took over the running on 9 July 1847, on which date the latter changed its name to the Lancashire & Yorkshire Railway.

The station was closed by British Railways on 7 October 1968.

Droylsden railway station had 4 platforms, two on the original Manchester to Stalybridge line and two on the later London and North Western Railway line to Denton.[1]

The Littlemoss Aqueduct carried the Hollinwood Branch of the Ashton Canal over the railway just west of the station. It was replaced with a footbridge after the canal was closed.[2]