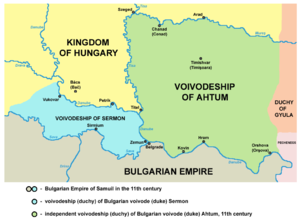 Some scholars (e.g., A. Madgearu, I. A. Pop) see Ahtum as the last member of a native dynasty established in the early 10th century by Glad, who is mentioned exclusively[7] in the 13th century Gesta Hungarorum as opposing the invading Hungarians.[3]

Sources for his life 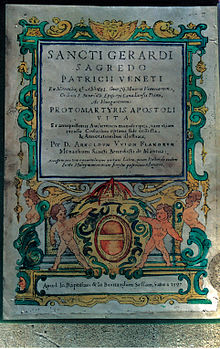 The 1597 edition of the Long Life of St Gerard

His story is narrated in the so-called Long Life of St Gerard,[3] an early 14th century compilation of different sources.[6] Although the much earlier so-called Short Life of St Gerard does not contain the Achtum episode, it has been suggested that this episode was inserted into the original, but not extant, *Life of St Gerard (of which the Short Life was an adaptation) from a different source, arguably from some legend attached to the name and family of Csanád.[3] The 13th-century Gesta Ungarorum refers three times to Ahtum.[3] His life and defeat is not mentioned by other chronicles.[4]

The Gesta Hungarorum presents him as a descendant of Glad’s lineage, but everything the author of the Gesta has to say about Glad is taken directly from the Ahtum episode of the Long Life.[3] His name may be connected to the Turkic word for gold or copper (altun).[5][7] Ahtum’s ethnicity (Bulgarian, Hungarian,[7] Kavar,[5] Khazar, or Pecheneg) is a controversial issue.[3]

Ahtum’s domain extended from the Körös River to the Danube.[4] His base of power was in Morisena (now Cenad, Romania), a stronghold on the Lower Mureş River.[6] The Romanian historian Alexandru Madgearu propounds that the name of his capital in the Latin text of the Long Life (Morisena) derived from the Romanian form Morişana.[8] According to the Long Life, Ahtum "had taken his power from the Greeks".[6]

He was baptized in the Orthodox faith in Vidin (Bulgaria), an event that must have postdated the Byzantine conquest of that city in 1002.[6] He also founded a Greek Orthodox monastery dedicated to St. John the Baptist near his residence.[3][4] But otherwise Ahtum was "very imperfect in the Christian faith" having as many as seven wives.[4]

Ahtum’ power was based on considerable resources, mainly cattle and horses.[6] He had so many warriors that he even dared, so we are told, to oppose King Stephen I and to levy tax upon the king’s salt as it was being transported from Transylvania.[4] Ahtum’s army, similarly with that of Glad, his forerunner, included militarily-organized Vlachs, Bulgarians and Slavs.[9] One of Ahtum’s retainers named Csanád fled to the Hungarian king[6] who declared Ahtum an enemy.[4] Csanád returned at the head of a large army, with which he eventually defeated and killed Ahtum.[6]

After Ahtum’s defeat, his domain was organized into a royal counties of the Kingdom of Hungary, one of which had its seat in Morisena, and was conveniently named Cenad (in Hungarian: Csanád) after its conqueror.[6] A Roman Catholic bishopric was also immediately founded at Morisena, and St Gerard was invited by King Stephen I to be its first bishop.[4]

The date of the conflict between Ahtum and Csanád acting on behalf of King Stephen I is a controversial issue.[3] The Long Life makes it clear that the conflict pre-dates St Gerard’s appointment as bishop of Cenad, which is known from other sources to have taken place in 1030.[3] On the other hand, Ahtum is said to have been baptized in Vidin, which was conquered by the Byzantine Emperor Basil II (976-1025) in 1002.[3] As a consequence, many scholars (e.g., C. A. Macartney, E. Glück, E. Fügedi)[4] favor a late date, one or two years before St Gerard’s appointment.[3] Others (e.g., I. Bóna, Gy. Moravcsik) attempted to read the evidence of the Long Life against the political background of the early 11th century; pointing to King Stephen’s military assistance of Basil II against Samuel of Bulgaria (997-1014), these scholars view Ahtum as Samuel’s ally and place Csanád’s attack either shortly before or at the same time as Basil II’s conquest of Ohrid (Macedonia) in 1018.[3] Finally, others (e.g., A. Madgearu) believe the attack took place a few years after the Byzantine take-over in Vidin, in either 1003 or 1004.[3]

The fact that the members of a certain genus Achtum (Ahtum kindred) owned landed property in Csanád County until the end of the Middle Ages may suggest that King Stephen I let Ahtum’s descendants keep some part of Ahtum’s possessions.[7]